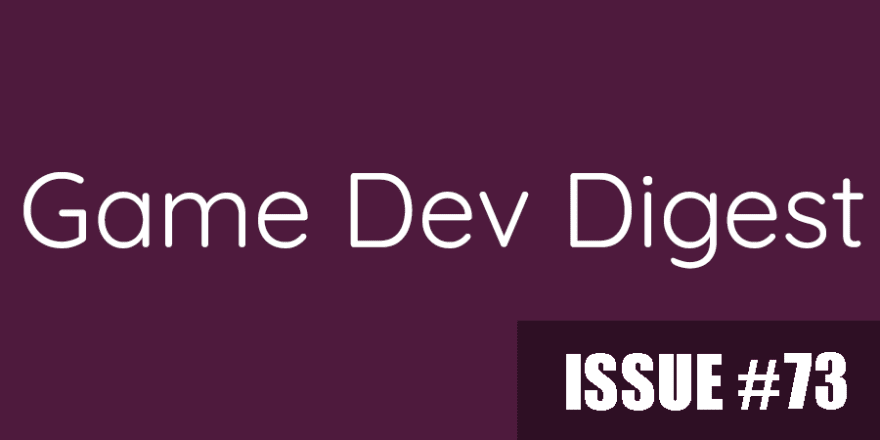 The holidays are approaching. Get your gamedev in while you can!

6 Mistakes That’ll Drain the “Juice” Out Of Your Game - We game-devs love talking about “juicy games”. It’s a silly term, but players recognize "juice" intuitively: it’s a sensation that feels lively, satisfying, and well… juicy! Here are 6 mistakes that could be draining your juice.
Mike Salyh

Understanding Pain Points in Game Design - An often-overlooked issue when it comes to the quality of a videogame are pain points—aspects that make a game frustrating to play. Like a skip in a record, these moments can at best take the player out of the moment, and at worse, ruin the game for them. We are going to talk about how consumers respond to pain points, and why if you send me your videogame, it damn well better include an audio slider and control rebindings.
Josh Bycer

Key Ingredients For Compelling Video Game Characters - One of the biggest struggles of a narrative designer in games is creating strong characters when they have such limited showtime and script. Movies and cinematic cutscenes give writers a certain control over how we see characters act, but how do we handle character building in less story-centric and less narrative-driven games?
Natalie Mikkelson

How to create beautiful scenes in Unity? 4 Easy Tips that just works. - No one cares about mediocre images and videos. Whether you want to sell your game, asset, or just have fun on a social page by earning likes and shares, you need an eye-catching screenshot or video. In this article, I show you 4 easy trick that helps you make beautiful scenes in Unity.
shop.runemarkstudio.com

Stylized VFX in Unity. Part 2: Custom Vertex Streams and Custom Data - This is a second part of “stylized vfx” cycle. In the previous article we have created a shader for dissolve effect that works with GameObjects. Now let’s see how we can make it work with Particle Systems.
torchinsky.me

How to Tell a Joke With Unity Timeline - Writing jokes is easy. Telling jokes is hard. In this tutorial, you’ll learn about Unity’s Timeline and how to create and deliver your very own punchlines!
raywenderlich.com

Unity Ray-Tracing: Get Started Now (Short Tutorial) - If you read my visual series on Unity ray-tracing effects, I might have motivated you to give it a try.
The Gamedev Guru

Accelerating Unity’s new GameObjects multiplayer networking framework - One of Unity’s top priorities for 2021 is to expand the Unity ecosystem with a first-party multiplayer networking solution for GameObjects that is easy to set up and extend, scales to meet the needs of high-performance titles, and is seamlessly integrated into the Unity ecosystem.
Unity

unitytips: Tuple Patterns - Unity started to supporting C# 8.0 with version 2020.2 beta and now we can start to use some new features like the Tuple Patterns.
diegogiacomelli.com.br

Getting Started with Blob Asset - Blob asset is a concept used in Unity’s DOTS. Basically, it’s an asset that’s stored in unmanaged memory that can be accessed inside components.
COFFEE BRAIN GAMES

Working with Scriptable Objects and Blob Assets, and creating a Utility Class - Today, I’m going to share with you how to convert scriptable objects to Blob Assets and also share a utility class that I created while studying Blob Assets.
neilmarkcorre.wordpress.com

How to get a variable from another script in Unity (the right way) - In this article you’ll learn the basic methods for accessing a variable on another script. along with some best practice tips to help you keep your project clean and easy to manage.
gamedevbeginner.com

Level up your mobile indie skills with the Indie XP series - There’s a lot more to a successful mobile game than the core development. In this speaker series, we explore all the fundamentals outside of game development that will take your indie mobile game to the next level. These are the key areas across game design, marketing, business, live operations, and more that will work to make your indie game a success after launch.
Unity

Unity Connect is ending... can we help? - With Unity Connect ending in February, there is an opportunity for Lets Build to fill a need within the greater community. I wonder what your thoughts are on Unity Connect. Why do you think it failed? Do you think we should try to reach out to this group?
Robert Carlson 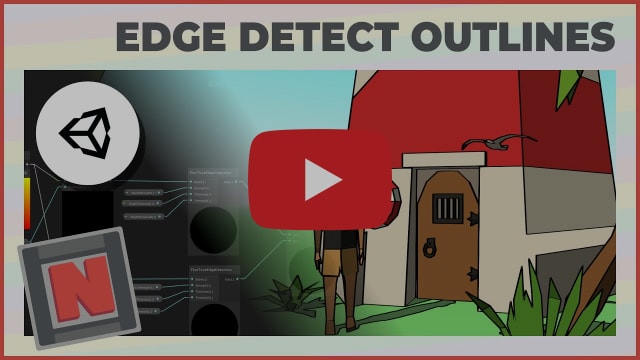 Toon Outlines in Unity URP with Shader Graph Using Sobel Edge Detection! | Game Dev Tutorial - Outlines are a great way to add polish and style to a variety of games! In this tutorial, I show how to implement sobel edge detection outlines in Unity Universal Render Pipeline using a combination of a shader graph and a renderer feature. These outlines affect the entire screen, do not change based on perspective, and can accentuate changes in color!
Ned Makes Games

Unity VFX Graph - Hits and Impact Effects Tutorial - Today's video includes Decals and it's all about that satisfying punch that a bullet hit does or the impact of a magic ability! Made with Unity VFX Graph in 2020.1.14 URP.
Gabriel Aguiar Prod.

Disintegration Effect in Unity - Nowadays, in the video game world, it's not uncommon to find a disintegration effect applied to the body of the fallen enemies.
TNTC

Neonverse lessons and best practices | Unite Now 2020 - Developing a fully functional game that can run on even the cheapest device is the holy grail of mobile development. In this session on Neonverse, learn how Tamasenco & Pixel Reign combined vertex lighting with new techniques to achieve rapid and beautiful results, animated in Shaders instead of animators and C# scripts, and more.
Unity

Flocking with GameObjects and Unity's C# Job System - In this Unity tutorial Porrith Suong from Thousand Ant shows how you can use the C# Job System, part of Unity's Data Oriented Tech Stack or DOTS, to create a multithreaded implementation of the classic Boids flocking system using GameObjects instead of ECS entities.
Thousand Ant

5 Tips for Writing Better Code in Unity | Unite Now 2020 - As your project’s ambitions and codebase increase, so does the risk of spaghetti code. In this session, we share 5 programming patterns and techniques you can consider implementing into your project to achieve a performant, clean, and reusable codebase.
Unity

How To Implement Key Rebinding | Unity Input System Tutorial - This Unity Input System tutorial will teach you how to implement key rebinding in your project. For project files access, check out my GitHub here: https://github.com/DapperDino/Input-S...
Dapper Dino 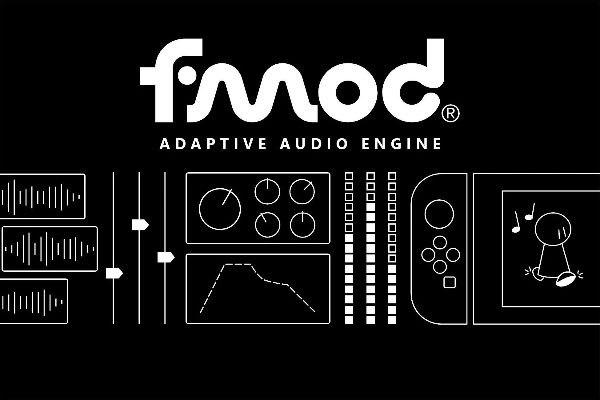 FMOD for Unity - FMOD is now FREE for indie developers. Simple, powerful, and easy to integrate – FMOD is the complete audio solution for Unity.

SIMPLE.
You want your game to sound great but don't want it to take forever. FMOD makes it easy to implement music and sound effects that adapt to gameplay. Produce amazing results with a fast and fluid workflow.
POWERFUL.
Scripting sound behaviors in Unity can be difficult to get just right. To make great adaptive audio, you need technology that lets you hear your ideas quickly and dial them in. Create adaptive sound behaviours with a comprehensive set of features for dealing with any game scenario. Real-time editing reduces development times and keeps you in the flow.
DEPENDABLE.
For years, developers have relied on FMOD to deliver thousands of gaming experiences. FMOD is Verified by Unity and backed by an expert support team. Join the community, be inspired and make games.
FMOD Affiliate

HUMBLE BIG ROYALTY-FREE MUSIC BUNDLE - We've teamed up with Dark Fantasy Studio for our newest bundle to bring you royalty-free music and sound effects to be used in video game development, live streaming, movies, YouTube, content creation and more! Get 26 albums and over 400 tracks, which include .wav, .mp3, and seamless premium licenses for music such as Shadows guild, Superheroes, Dreamagination, and Slasher. Plus, your purchase helps support The V Foundation and Prevent Cancer!

$260 WORTH OF AWESOME STUFF. PAY $1 OR MORE
Humble Bundle Affiliate

Free-RPG-Tutorial-with-Skyrim-Like-Skill-System- - Watch the videos here to help you get these systems put together.
KampinKarl1 Open Source

The Best of Unity Super Sale - More than 700 incredible assets are now on sale for up to 50% off through December 4, 2020. LAST DAY OF THE SALE!
Unity Affiliate 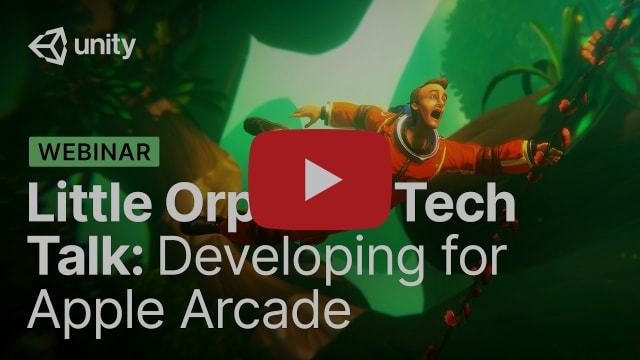 Little Orpheus - The Chinese Room goes behind the scenes of their exceptional game and gives a hint of what the future may hold for Ivan Ivanovich.
The Chinese Room

Don't use String.ToLower() in C# when comparing strings