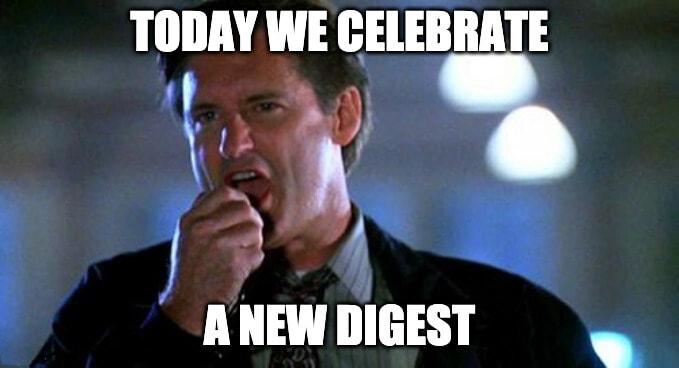 Plenty to keep you reading this weekend. If you have more than one scene in your unity project, this week's digest might have some useful tips. Plus, animation, physics, tools, 2D and 3D, and more. So much to keep you busy.

Finally, how am I only now learning that Immediate Window package exists?!

Unity Recorder - Use the Unity3d recorder to export screenshots and footage at 4k with a silky smooth 60fps, straight from the editor! It takes just a minute to setup, so you'll be able to showcase a canoe falling from a cliff in no time :D
Jamie Nooten

Achieve better Scene workflow with ScriptableObjects - Managing multiple Scenes in Unity can be a challenge, and improving this workflow is crucial for both the performance of your game and the productivity of your team. Here, we share some tips for setting up your Scene workflows in ways that scale for bigger projects.
[Also checkout gekido's Multi-Scene loader which "provides much of the same workflow out of the box!"]
Unity

How To Handle Data Between Scenes In Unity - I think as usual in Unity there are different ways to achieve a result, so we’ll check the easiest way to do it and if it could be a valid one. In the end we’ll build our own way to handle data between scenes step by step defeating the weaknesses.
gamedevelopertips.com

C++ For C# Developers: Part 7 – Pointers, Arrays, and Strings - Today we’ll continue the series with a look into pointers and, very differently from C#, the related concepts of arrays and strings. We’ll cover some interesting C++-only features, such as function pointers along the way.
JacksonDunstan.com

Learn how to tell your stories in real-time 3D - Our new course, Real-Time Animated Storytelling, is designed to help artists learn how to use Unity’s fast and powerful suite of cinematic tools for animation.
Unity

Learn to code or teach Unity with two live courses coming in July - Create with Code Live is back for a summer session, for anyone who wants to learn to code the fun way – by making games. We also have a brand-new course, Unity for Educators: A Beginner’s Guide, designed for teachers who are interested in bringing Unity into the classroom and are new to Unity. Both free four-week courses blend live, interactive sessions with Unity experts and self-paced online learning, starting on July 13.
Unity

Making of The Heretic: The VFX-driven character Morgan - Demo team’s Technical Artist Adrian Lazar has appreciation for the creative options made possible by real-time authoring. Read the post below for his detailed breakdown of the process behind the character Morgan, as well as useful tips for anyone doing VFX in Unity.
Unity

Pathfinding with A* algorithm in Unity tiny game project - In this tutorial we are going to look into the pathfinding of the shortest route between two points in a tilemap-based world on a basis of a grid. It is a continuation of the previous article where I’ve presented the concepts behind A* search algorithm.
Pav Creations

The (sort of) hidden world of indie game-tools development - Publishing tools is an interesting and sort of hidden world that can potentially interest other developers making games. If this doesn’t spark much curiosity in my fellow indie-dev reader yet, yes, it can help you with some extra cache while you’re making your game!
Andrea Interguglielmi

Point and Spot Shadows - This is the tenth part of a tutorial series about creating a custom scriptable render pipeline. It adds support for realtime shadows of point and spot lights.
Catlike Coding

Depth Based Post Processing in Unity3D HDRP - Here I am then to save you the trouble of digging through the included HDRP post effects to find out how to actually use the depth buffer.
MITCH MCCLELLAN 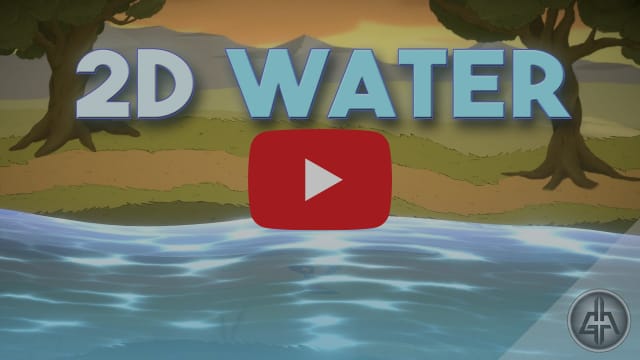 Unity 2D - Water Shader Tutorial - Let’s see how to create a 2D Water shader, with reflections, caustics and a shoreline. It's a pretty cool trick to enhance your 2D scenes, you only need shader graph and that's it.
Gabriel Aguiar Prod.

How to work with multiple scenes in Unity - Improve your workflow when working with multiple scenes! Learn how to create a loading screen to go from the main menu to a specific level, and split a level into different scenes so you can load it faster.
Unity

Custom Pass Framework in HDRP (Tutorial) - When using the High Definition Render Pipeline (HDRP) we can use a custom pass to change materials on scene geometry, change the draw order in which objects being are rendered, and read camera buffers to use in our shaders. In this video, we'll take a look at how we can build a Custom Pass in Unity and use it to manipulate our scene.
Unity

Leverage Unity ML-Agents and Game Simulation | Unite Now 2020 - Want to know how to improve your game mechanics with machine learning and large-scale simulations? Watch this video to see how to use Unity ML-Agents for training embedded player bots to run game behavior.
Unity

The State Pattern (C# and Unity) - The state pattern is a programming pattern that is also known as a Finite State Machine or FSM is a pattern that can be very useful for systems with a small to a medium number of distinct states or behaviors. The pattern can help to clean up and make it very clear exactly WHAT code is running.
One Wheel Studio

How to Program in C# - Variables (E02) - Let's have a look at variables!
Brackeys

How to Animate Characters in Unity 3D | [Ep: 2] Animation Transitions With Booleans - Learn how to transition between multiple animations using booleans in Unity 3D!
Nicky B

How To Use Ragdoll Physics In Unity - Ragdoll characters in Unity.
Dapper Dino

Creating a Physics Sandbox | Beginner Prototype - In this video, we show you how we created a prototype that allowed players to experiment with Unity’s physics system, which allows you to create a lot of complex gameplay with a few simple elements!
Unity

Move in Unity3D - Ultimate Unity Tutorial - In this Unity Tutorial, you'll learn everything you need to know about Moving. We'll discuss which Unity3D Components to use and how to use them. From controlling simple boxes with Keyboard Input to more advanced character controllers and navigation.
Jason Weimann

BattleQuest added the InputSystem and Unity.Mathematics - can they reduce code? Oh yeah! - I used the new Unity InputSystem to take input from the keyboard and joystick or virtual controls on mobile - it is very, very nice. I then created a momentum system and used a functional programming approach to update position based on acceleration and velocity. Finally, the Unity.Mathematics package enabled me to rip out lots of code as well as IF STATEMENTS!! Watch this video to find out how....
DesignerTech

Unity Multiplayer/MMO Game - Game Devlog #3 - My technical thoughts on building a MMO Game. I have no professional experience in this area, and try to come up with an architecture that is simple to implement but also scalable enough for my needs.
[be sure to read the comments for more informative discussion]
LiveOverflow

Unity AR Foundation AR Occlusion AR Core Depth API ! - Today I provide you with a step by step tutorial where I show you how to get Occlusion with AR Foundation 4.1 working with Android.
Dilmer Valecillos

COLOUR SWATCHES in Unity - In this quick tutorial I show you how to use the colour swatch option in Unity, to remember different colours you may have used throughout the editor. This allows you to easily select and choose colours from previous materials, texturing, objects and more!
SpeedTutor 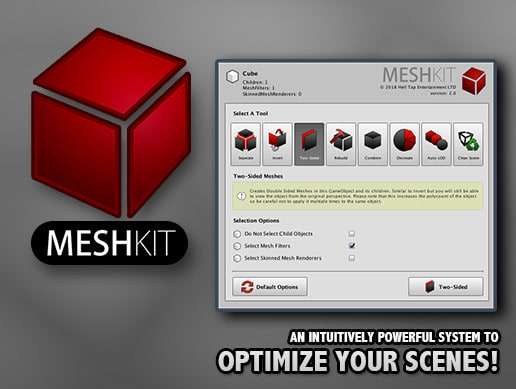 Immediate Window - The Immediate Window lets you run C# code in the editor. Works in both Edit Mode and Play Mode. You can also use it to inspect objects and read their properties. Useful for debugging purposes.
[note: first install it from the Package Manager. thanks _
_Abhinav Demkeys _
_]
Unity

Light2D - Several years ago I wanted to have 2D lighting in my Unity games and was dissatisfied with the runtime performance of the other Asset Store solutions at the time. I implemented Nicky Case's popular Sight & Light solution in Unity using the builtin Physics2D colliders and ray casting. [Formerly found on the Asset Store, now free and open-source.]
Broxxar Open Source

PositionListTool.cs - Ever wanted to have a list of positions you could drag around the scene that you can then get in code? Well you might like this tool I made during a game jam! I used it to define AI path behaviour, how will you use it?
Brogrammist Open Source

Water 2D Pro - 50% off right now! Water 2D PRO is a powerful 2D liquid and fluid emulator for Unity. The big advantage of W2D is that it uses Unity 2D Physics, so you don’t need knowledge in other physics engines and no need to learn new and complicated things. You can create amazing water simulations in no time!
Apptouch Affiliate 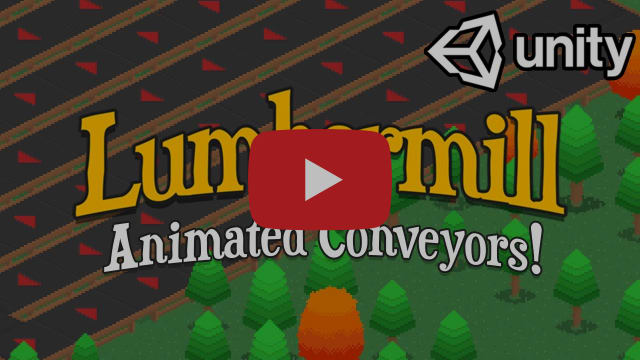 Lumbermill - Build, manage and maintain a Lumber Mill deep in the forest!

Hire Lumberjacks to chop trees, Mechanics to maintain your machines, and Tree Surgeons to halt the spread of disease in the forest. Research and construct vast factories for processing lumber, and sell your products for the highest value to keep your business thriving.

Uncover the procedurally-generated forest and discover secrets along the way.

Be careful with how you maintain the forest though, as disease, deforestation, broken machines and rogue employees can spell disaster for the Lumber Mill.

Blocknator: from idea to launch

Getting Started with the Blazor Range Slider Component

NFT’S AND METAVERSE: A GLIMPSE INTO THE FUTURE

AWS for Games: Worth it?