We have a few interesting news related to Remix this week! This was expected, after last week's Remix Conf.

Already announced in Remixing React Router: many Remix abstractions (action, loader...) will be added to React-Router. This is happening in v6.4, currently in pre-release. Doc for the new Data APIs is already available!

Should you use Framer Motion or Motion One?

Matt is the author of many popular animation libraries. He explains in a nuanced way the difference between a declarative and an imperative model. Most React developers should use the declarative Framer Motion library. Motion One is a lightweight, low-level imperative library that wants to be the "JQuery for Web Animations API".

Meteor or also known as MeteorJS is still alive and well, and we're happy to share that we are also growing!

Meteor is a mature and open-source framework for seamlessly building and deploying Web, Mobile, and Desktop applications in Javascript.

Use popular frameworks like Vue, React, Svelte, or Blaze and tools right out of the box. Focus on building features instead of configuring disparate components yourself.

Whether you're still studying to become a developer or a seasoned veteran, you'll find it convenient and easy to code with Meteor. Join the community of developers from all over the world that rely on Meteor. Get started here!

Axiom enables you to monitor the health and performance of your Vercel deployments by ingesting all your request, function, and web vitals data.

Use Axiom's pre-built dashboard for an overview across all your Vercel logs and vitals, drill down to specific projects and deployments, and get insight on how functions are performing with a single click.

PS: I use it myself to monitor the newsletter signups 😉

Jay explains the 3 main challenges of the web/mobile cross-platform today: styling, animation, navigation. He suggests to use Tailwind-React-Native with his new cross-platform animation library. Legend Motion relies on the same API as Framer Motion (web-only). The doc briefly explains the differences with Moti, another similar solution.

Build and hot-reload times have skyrocketed at Airbnb. They decided to replace Webpack with Metro (the React-Native bundler 🤯) and saw a significant improvement. This article highlights some architectural differences between the 2 bundlers, and the challenges encountered during this migration. Note: Stripe also uses Metro 🤔.

How Lerna just got 10x faster!

Nwrl (behind Nx) just took the leadership of the unmaintained monorepo tool Lerna. They have already released a v5.0 and started integrating Nx into Lerna 5.1-beta as a retrocompatible option. A simple Lerna config useNx: true and your build becomes immediately faster. 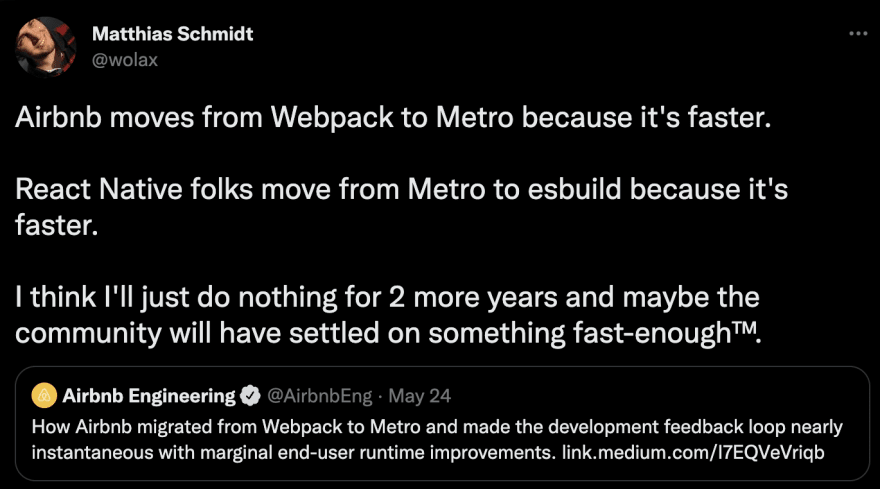