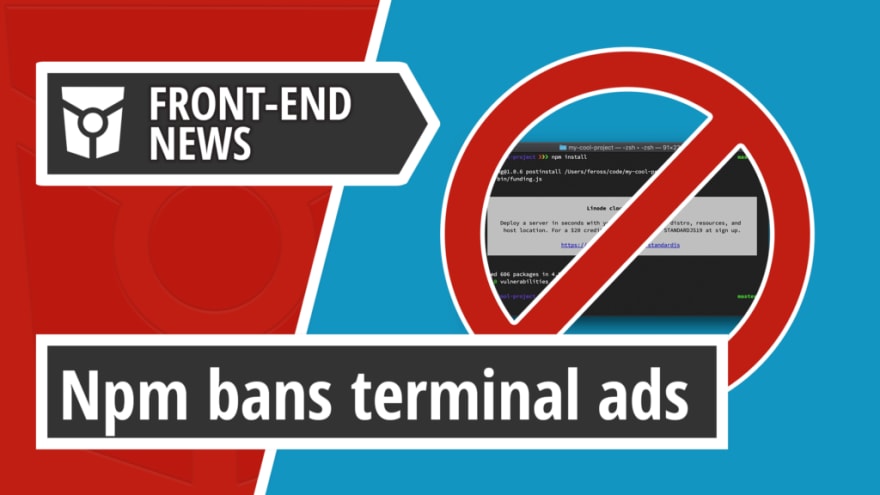 Hello everyone and welcome to another round of Front-End News.

Next is a larger than usual software updates section, as well as a special Developer Of The Week. So stay with me until the end to find out all the details.

Last week I mentioned how StandardJS v14 included an “open source experiment that helps maintainers get paid”. This was due to a project funding that was created by Feross, one of the StandardJS maintainers. The idea behind Funding is that companies buy ad space in people’s terminals, and the Funding project then shares its profits with open-source projects who signed-up to show the ads.

It’s no surprise that the move created fierce debates with strong arguments on both sides. While the vast majority agrees that Open Source software and maintainers need better funding, many developers were not pleased with these ads, who made their way into the installation logs.

On the surface, Funding is similar to OpenCollective, another project that displayed donation requests via an npm terminal post-installation message. This also caused a lot of outrage at the time, but most developers ended up accepting the practice.

Having full-blown adds in the terminal seems though to be a step too far for many people. As a result, the first ad-blocker for npm packages was created. Also, due to the online pressure, Linode, one of the two companies who purchased ads on Funding, decided to back out of the project and retire their ads. The other company, LogRocket, also backed out silently. Both companies though expressed their support towards exploring new ways to help the open source maintainers.

@voxpelli @dawnerd We reconsidered after reflecting on the developer community's reaction. We still passionately support open source software along with @feross, but we'll be more careful about experimenting in the future while continuing to innovate. On that note:
github.com/feross/funding…

Things escalated to the point where npm, Inc, the company maintaining the npm repository, decided to step in. The online magazine ZDNet reports that Ahmad Nassri, the CTO of npm, made a statement via email:

We are always working on improving our policies and expand on our commitments to the community. […] To that end, we’re making updates to our policies to be more explicit about the type of commercial content we do deem not acceptable.

According to these upcoming updates, npm will ban:

The announcement came right after Feross announced that he is ending his experiment. He published a very detailed article on his blog describing the reasons that started the whole thing, how events unfolded over these days and what his future plans are.

Npm also published an article on their blog where they express their support for Open Source maintainers and their intention to create and launch an Open Source funding platform by the end of 2019. They invited anyone interested to participate in the process to get in touch.

Overall it is undeniable that Feross and the Funding experiment managed to disturb the status quo and to raise further awareness over the often thankless work as Open Source maintainers. I am looking forward to seeing what solutions will arise as a result.

Mozilla CEO will step down at the end of the year

Mozilla CEO, Chris Beard, announced to step down from the helm of the company. He has been leading Mozilla Corporation for the last 5 years and a half and he will continue to do so until a new CEO can be appointed.

Chris declared himself pleased with the current state the company and thinks that now it’s a good moment for a change in leadership.

It’s with that backdrop that I made the decision that it’s time for me to take a step back and start my own next chapter. This is a good place to recruit our next CEO and for me to take a meaningful break and recharge before considering what’s next for me. It may be a cliché — but I’ll embrace it — as I’m also looking forward to spending more time with my family after a particularly intense but gratifying tour of duty.

Mitchell Baker, the executive chairwoman of Mozilla Foundation also published a public message of gratitude. She announced that Chris Bear will continue to be involved as an advisor to the board and she assured everyone that Mozilla will continue on the current path.

Microsoft developers announced the release of TypeScript v3.6. The update brings a number of features like stricter generators, a more accurate array spread, improved UX around promises and many other changes.

The TypeScript playground also got improved, with a lot of new options like all the strictness flags or support for plain JavaScript files. The auto-import process got a bit smarter too and it is now better at deciding how to import other modules based on your existing code.

Before you update your existing code, make sure to account for all the breaking changes.

Dojo is a progressive framework for modern web apps using TypeScript and modern web APIs and the development team just announced the release of its 6th major version.

This milestone brings a number of important updates. In addition to the existing class-based widget API, a new function-based API is being added. There is also a new concept of middleware which is designed to replace all existing supplemental widget patterns, mixins, metas, and decorators. For more information, you can check the Dojo middleware reference guides or some of the middleware examples available.

The team has been eating their own dog food as well. The Dojo website is statically generated using the latest patterns while the documentation content is automatically imported from the repository and rendered statically.

If you are already using Dojo or want to start using it, go read the release notes and the migration guide to make use of all the new features.

Following the close of the funding experiment, StandardJS released another update, to version 14.1.0 where that package is no longer included. This also upgrades eslint to v.6.2.2 and adds support for ES2020, the latest version of ECMAScript specification.

We get a glimpse at the next version of React Native with v0.61.0-rc.0 The main feature present in this update is the integration of React v16.9 More details are to be published soon in another blog post and the full set of change notes will be made available before the stable release.

Feathers is a web-framework for creating real-time applications and REST APIs using JavaScript or TypeScript with Node.JS, React Native and the browser. It works with any backend supporting many databases out of the box and with any frontend technology like React, VueJS, Angular, Android or iOS.

This week we got the release of the 4th major iteration, code-named Crow. The highlight of the major changes is available in a blog post together with the recording of the live launch and a Q&A session with the creator of the framework.

The Developer of the Week

The Developer of the Week for this episode is Val Head. Val is a designer and web animation consultant with a talent for getting designers and developers alike excited about the power of animation.

She wrote two books on this topic. The first one is a free ebook named “Pocket Guide to CSS Animation” and it’s meant for web designers or developers who are new to CSS animations and want to start using them in their own work or experiments.

The second one is titled “Designing Interface Animation” and is a crash course in motion design theory and practice for web designers, UX professionals, and front-end developers alike.

Val also writes articles, both on her own website and on other well-known platforms like Smashing Magazine or A List Apart. She is the curator of the “UI Animation Newsletter”, she hosts the “All The Right Moves” screencast and is a cohost of the “Motion and Meaning” podcast.

You can also see Val speaking and doing workshops at conferences all over the world. If you’ve got an event that could use a design talk or web animation talk, don’t hesitate to get in touch with her.

What are your thoughts about helping finance Open Source maintainers? Please leave your answers in the comment section or send them to https://twitter.com/frontendnexus