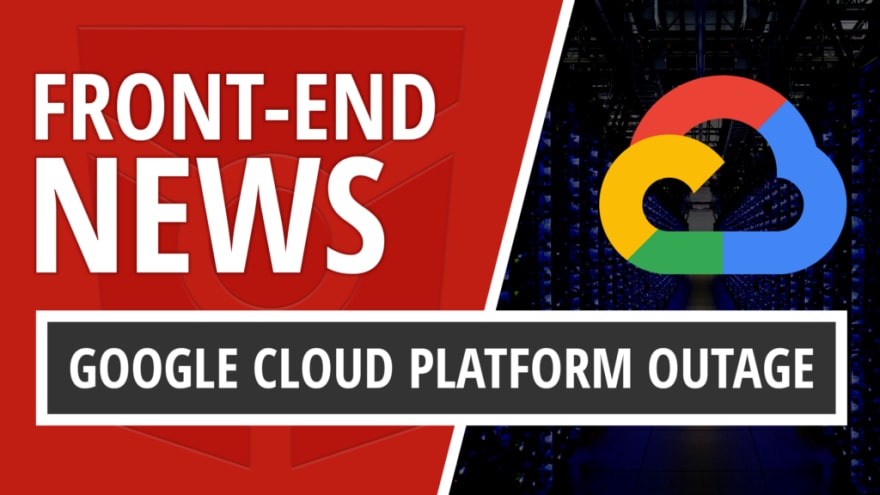 Hello everyone and welcome to another edition of Front-End News, bringing you information on the latest events in the industry.

Let’s take a look at what I have prepared for you:

Just like last time, I have also prepared a video version for those that prefer listening instead of reading. If you enjoy this format, I would appreciate it if you would subscribe to the YouTube channel as well.

Google Cloud Platform suffered a major outage on Sunday, June 2nd. As a result, a large area in the Eastern United States had issues accessing services dependent on the platform, like YouTube, Docs, Gmail, Drive and the rest of the suite. In addition, other third-party services were affected, such as Snapchat or Discord, as they also make use of the Google Cloud on their backend.

We got an official statement from Benjamin Treynor Sloss the next day. Who is this guy, you might ask? Well, he’s the Vice President of Engineering at Google, and his LinkedIn description starts with “If Google ever stops working, it’s my fault”.

So, if you got affected, blame him. Anyway, he gave an overview on how the problem started in the first place, how the team responded to the issue and promised more details in an official post-mortem analysis, once everything was taken into account.

Said post-mortem report was published on June 6th with extensive details, just as promised. Long story short, during a planned maintenance event, the internal network management was disconnected over a much larger section than intended. This resulted in severe congestion of the remaining network connections, which, in turn, delayed the deploy of the correction commands. That’s what many of us normal mortals experience during a severe rush hour traffic jam. Nothing new under the sun.

If you want to get the full story, you can find it in the links down below.

Version 75 of Chrome made its way to our desktops, bringing forth a list of updates. Here are the most important ones:

As a bonus, all talks made by the Chrome Developers team at Google I/O 2019 are available on the team’s official YouTube channel.

Chris Beard, the CEO of Mozilla Corporation, gave an interview with the German magazine T3N. He confirmed that the company he is running is looking into extending their sources of revenue and are considering subscription services as an option. Don’t worry, you won’t have to pay to use Firefox. The browser will continue to remain free for everyone. Instead, the planned Firefox Premium will include a VPN solution and extended cloud storage, aiming to increase the security and privacy of your online experience.

There will also be a “try-before-you-buy” option. The basic tier will be free and accessible to everyone, although it comes with restrictions on both the storage space and the included traffic bandwidth for the VPN service. If you are satisfied with the offered experience, you can pay to access the premium tiers that will give you more generous limits.

Apple’s WWDC 2019 was a major event for the tech world. While everyone was discussing the most expensive cheese grater ever made, there was also an announcement that will impact the front-end development industry.

Apple presented its new “Sign In with Apple” as an alternative to the similar services offered by Facebook, Google or Twitter. It will actually be a requirement for apps in the App Store, but it will be available for use on the web as well.

TechCrunch made a real in-depth analysis of the new feature and provides answers to the most frequent questions any developer might have. More details are available in the article linked down below.

Question of the day

Have you built an app that relies on the Google Cloud Platform and it was affected by the outage? Have you personally felt the effects of the incident? Please let us know in the comments area down below.

That’s all there is in this edition. Follow Front End Nexus on Twitter at https://twitter.com/frontendnexus to be notified as soon as a new update happens. I also want to encourage you to subscribe to the YouTube channel at https://www.youtube.com/channel/UCgACtqiDmnSaskDIBsK54ww. I can get a custom URL once the channel hits 100 subscribers, so your support is highly appreciated.