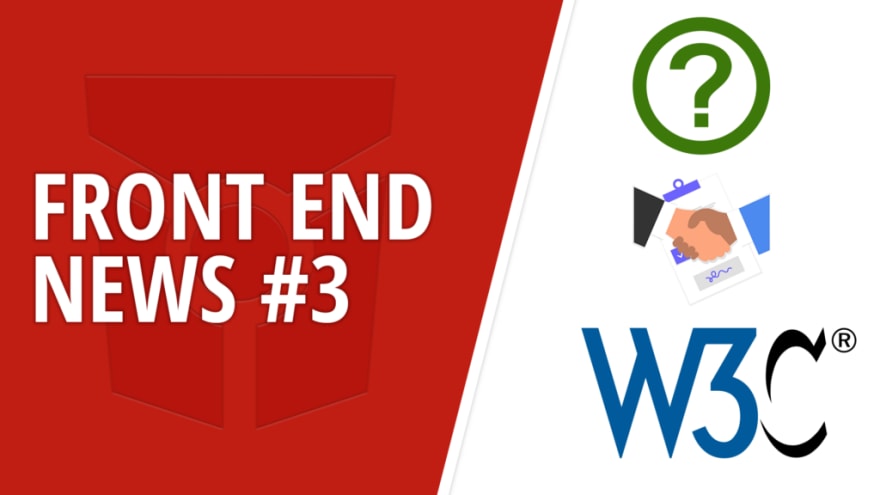 Hello everyone and welcome to another edition of Front-End News, the series of articles and videos that brings you information on the latest events in the industry.

Here is what I have prepared for you today:

Just like last time, I have also prepared a video version for those that prefer listening instead of reading. If you enjoy this format as well, I would appreciate it if you would subscribe to the YouTube channel as well.

W3C and WHATWG will collaborate on advancing the Open Web Platform

The first topic is the newly announced collaboration between W3C and WHATWG. Now, ain’t that a mouthful? W3C stands for the World Wide Web Consortium and is the organization responsible with defining and maintaining the standards for the World Wide Web. On the other hand, WHATWG or the Web Hypertext Application Technology Working Group is a community of people interested in evolving HTML and related technologies.

The World Wide Web Consortium released a blog post announcing it has signed an agreement with the Web Hypertext Application Technology Working Group to develop together a single set of specifications for HTML and DOM. The two entities published a Memorandum of Understanding, defining the roles each organization will play from now on.

HTML and DOM will be developed in collaboration to produce Living Standard specifications, as well as Recommendation and Review Draft snapshots. W3C will stop their independent publishing of such standards and will work instead of transforming the new Review Drafts into W3C Recommendations.

If you are interested in the specifics of this collaboration, you can find more details in the documents linked below:

LayoutNG is scheduled to be released in Chrome 76

Starting with version 76, Chrome will ship with a new layout engine, called LayoutNG. The official announcement mentions that the update will provide better support for non-Latin scripts and will fix many issues with floats and margins, as well as many other web compatibility issues. Some of the improvements are mentioned in more detail, with example showcasing the difference between the current display mode and the improved one, created with LayoutNG.

The adoption of the new engine will happen in stages, with Chrome 76 using LayoutNG only for inline and block layout. Further updates will extend the use to the rest of layout cases, such as table, flexbox or grid.

Material-UI v4 is out

Material-UI is a set of React components that are built according to the Material Design framework. Version 4 is the second majore update, as the developers skipped over v2, while v3 only introduced minor changes related to browser support.

Some of the major improvements in v4 include better customization (according to the Material Theming guidelines), improved performance and download size, as well as preparing the ground to further development.

Those interested in using this set of components can learn how to do it using the improved documentation and a brand a cookbook, published by Packt. Another option will be the still-in-development Premium Themes store where one could purchase ready-to-use solutions that will require a minimum of customization.

FreeCodeCamp is moving off Medium

FreeCodeCamp is one of the largest developer communities on the web, with over 135.000 users. They provide free tutorials, lessons and coding challenges on a wide range of topics.

On May 27, Quincy Larson, the creator of FreeCodeCamp, announced in a forum post that they have moved all their content off Medium and into their own Ghost-powered news platform. The main reason for the change has been the lack of traffic from Medium and the fact that the most popular articles have been moved behind a paywall. While the original 5000 articles, most of them written by contributors, still remain available on Medium, they have been cross-posted on the internal platform.

The move has not been completely smooth though. On one hand, there are a number of technical and formatting issues, which can be expected from a move of such magnitude. On the other hand, there is a possible issue of whether FreeCodeCamp had the rights to move the contributor articles without their express consent.

Ben Halpern, the founder of Dev.To, another wildly popular community of developers, has expressed his concern that the move has violated not just the Medium Terms of Service, but the rights of the contributor writers. As a result of the process, the articles have been posted on the FreeCodeCamp platform without even notifying the original authors, they had wrong canonical URLs and, in many cases, the author has defaulted to the freeCodeCamp.org account. Meanwhile, each writer has to personally appeal to the staff to have a new account created, which will then be credited as the author.

Ben is not accusing FreeCodeCamp of malicious intent, but he does consider that the moving process was not thought out properly and points to HackerNews, another major entity leaving Medium, who is doing it in an open and transparent process. The discussion still continues, on both FreeCodeCamp and Dev.to forums.

That’s all there is in this edition. Follow Front End Nexus on Twitter at https://twitter.com/frontendnexus to be notified as soon as the update happens. I also want to encourage you to subscribe to the YouTube channel. I can get a custom URL once the channel hits 100 subscribers, so your support is highly appreciated.

What is Sky Hub UAP Tracker ?

The NEW Match-Case Statement in Python 3.10

When REACT is too much, what do you go with?