This episode was created in collaboration with the amazing Amanda Cavallaro.

So now that we have styling for our terminal app, let's make it run commands!

As I said a few episodes before, backend and frontend tend to follow different rules:

The proper way to do this is to do all the restricted things on the backend, and only expose that functionality to the frontend over secure channels.

For this episode, we'll just disregard such best practices, and just let the frontend do whatever it wants. We'll do better in the future.

Here's how we can start such highly privileged frontend code:

Side note on frontend framework

For now I'll be doing all DOM manipulations the hard way, using browser APIs directly. Mostly because most frontend frameworks rely on bundlers like rollup or webpack, and I don't want to introduce extra complexity here. We have a lot of complexity to cover already.

If this becomes too distracting, I might add jQuery at some point, so we spend less time on the DOM, and more time on the actual logic. Or some simple templating system that doesn't require a bundler.

Or maybe I'll reorder the episodes a bit and we'll do rollup and Svelte earlier than I initially planned to.

Only three nodes do anything:

With DOM commands, that will be:

We also want to show command output, so I wrote another helper. It will append to #history the following fragment:

With so much code needed to display the output, it's actually surprisingly easy to run the command.

We do the usual addEventListener / preventDefault to attach Javascript code to HTML events.

Then we run the same child_process.execSync we did on the backend, except we're in the frontend now. It works as we disabled context isolation.

After that we add the command and its output to the history view, clear the line, and make sure the input remains scrolled ito view.

Our terminal app is already somewhat useful, but it's extremely limited.

Commands we execute have empty stdin, and we cannot type any input to them.

We don't capture stderr - so if you have any errors, they currently won't appear anywhere.

As everything is done synchronously, it's best not to use any commands that might hang.

We cannot do any special shell operations like using cd to change current directory.

And of course we don't support any extra formatting functionality like colors, moving cursor around and so on.

This is what it looks like, with actual commands: 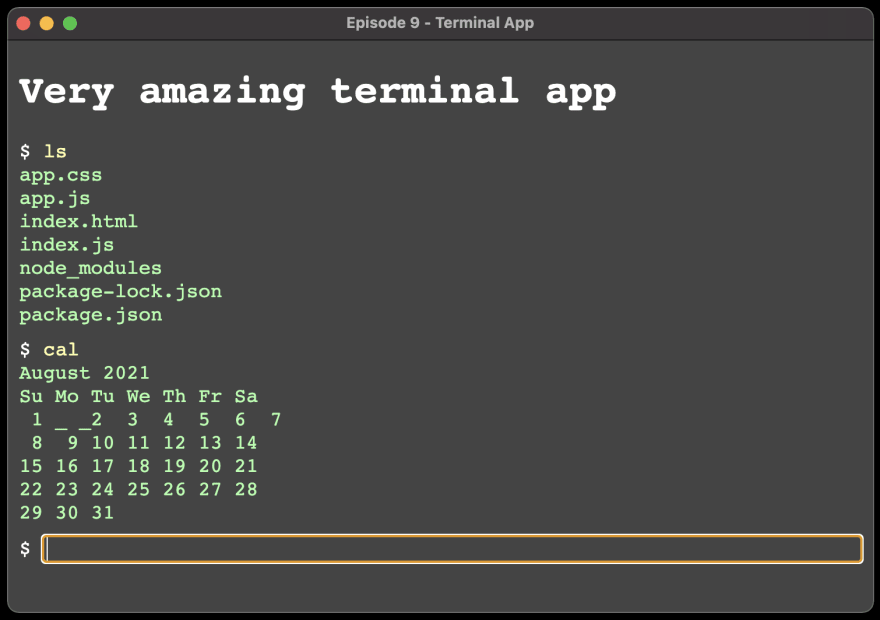 As you can see ls worked just fine, but cal tried to use some special codes to highlight current day, and that came out messed up a bit.

Over the next few episodes, we'll be improving the app.