Bundlers are a curse upon Javascript ecosystem. In just about every other language, to write an app you just create some files with code in that language, and do whatever's equivalent of npm install some-packages and things just work.

For some crazy reason in Javascript every project needs a bundler like rollup, webpack, or snowpack, and a bunch of convoluted config files nobody understands, so people just copy them from some boilerplate repo, and hope for the best.

Bundlers went through a lot of iterations, and unfortunately the much promised simplicity never arrived. Configuring them from scratch is just as much pain as it always has been.

I'm starting with Svelte today, but we'll go through very similar process with pretty much any other frontend framework.

How to use bundlers with Electron

To create an app, the correct order is to setup frontend project with whichever bundler you need first, from your favorite boilerplate. Then clean up the stuff you don't need. Then add Electron to it as the last step.

Don't try to create Electron app, then add a bundler to it. This order has much higher risk that you'll end up wasting precious hours of your life on editing bundlers' stupid config files. Did I mention I hate those config files already? Because I absolutely do.

So we first create a Svelte app with degit, but we'll be stripping out most of it. We definitely need rollup.config.js and package.json as that's what we got the boilerplate for. We can keep package-lock.json and .gitignore as well. Then just delete everything else, it will only get in a way:

So unlike in all previous episodes, we'll need to open two terminals:

For frontend-only changes you can just reload the page, and it will just work. For backend changes you'll need to restart npx electron . command too.

We can take existing file, just point it at our dev server. When we package the app we'll need to make it aware of which environment it's in, and to point at that URL, or at the generated file, based on that.

We don't need to do any changes, so taking it directly from the previous episode:

We need to point at bundle.js and bundle.css both coming from the rollup bundler. Doing it this way makes it work in both development mode, and when application in properly packaged:

This script imports the app, and attaches it to the page. There's one that's part of the boilerplate, but it's honestly way too complicated, so here's a simpler version:

It's the same terminal app, split into main component, and two other components - one for history entry, and another for command input. If you know Svelte it should be very clear what's going on.

When the form submits, we run window.api.runCommand, which we created in preload. Unfortunately as this command is synchronous, it's possible to hang up your Svelte app. We'll deal with it later.

The history.push(newEntry); history=history is a way to tell Svelte that history just got modified.

It's mostly same as previous episode, I simplified CSS a bit, with gap. This component is only responsible for display, and doesn't have any logic.

This component calls back the main application whenever the user submits a command, and then clears it.

I also simplified the CSS a bit compared with previous episodes, with gap and *: inherit. 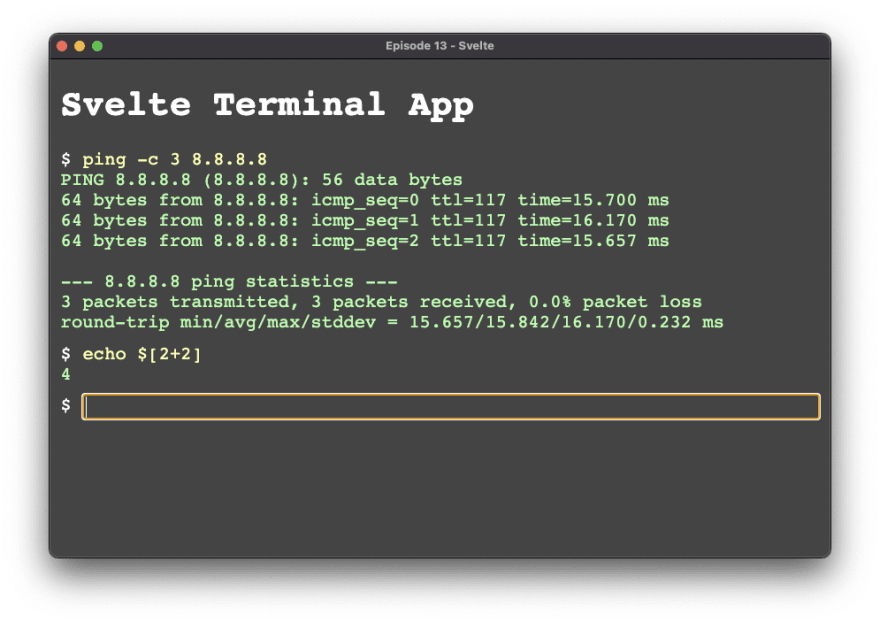 That was a long one, and I pretty much assumed you understand some basic Svelte, and just want to show how it works with Electron. If you need a Svelte tutorial, there's a great one on Svelte website. If you want to keep following my Electron Adventures along, it's probably a good idea to get some basics, as that's what I plan to be using the most.

But it won't be an exclusively Svelte series, and in fact in the next episode we'll try to do the same with React and webpack.