On June 26th 2015 Percolate Studio has joined Meteor. This company has had a significant impact on Meteor community that is lasting until today and affecting other areas of JavaScript ecosystem as well.

If you look on the Percolate Studio website you will notice that they are behind Atmosphere, the official Meteor package browser. If you are old user like me you will also notice the old design for the TODO example and Local Market Cordova example.

Percolate has been using Meteor from the 0.x days so we can find quiet a few gems in their organization on GitHub. I have taken look and effort to get some of them running so that you don't have, here is a quick summary of what I have found:

Examples for how to use the early versions of Famo.us in Meteor as they described in their blog post. Needless to say Famo.us today is something completely different.

There are additional examples that they made for devshop talk.

This seems to be an example for a sales dashboard reporting. You won't be able to run this unless you can install packages before before it became part of Meteor tool, so you will need meteorite. There doesn't seem to be any inherent functionality so it looks like another example or something that you would put up on a monitor internally in the company.

This is a beautiful landing page for a recipes app. This one is a nice reminder of what made Percolate so great, the design. 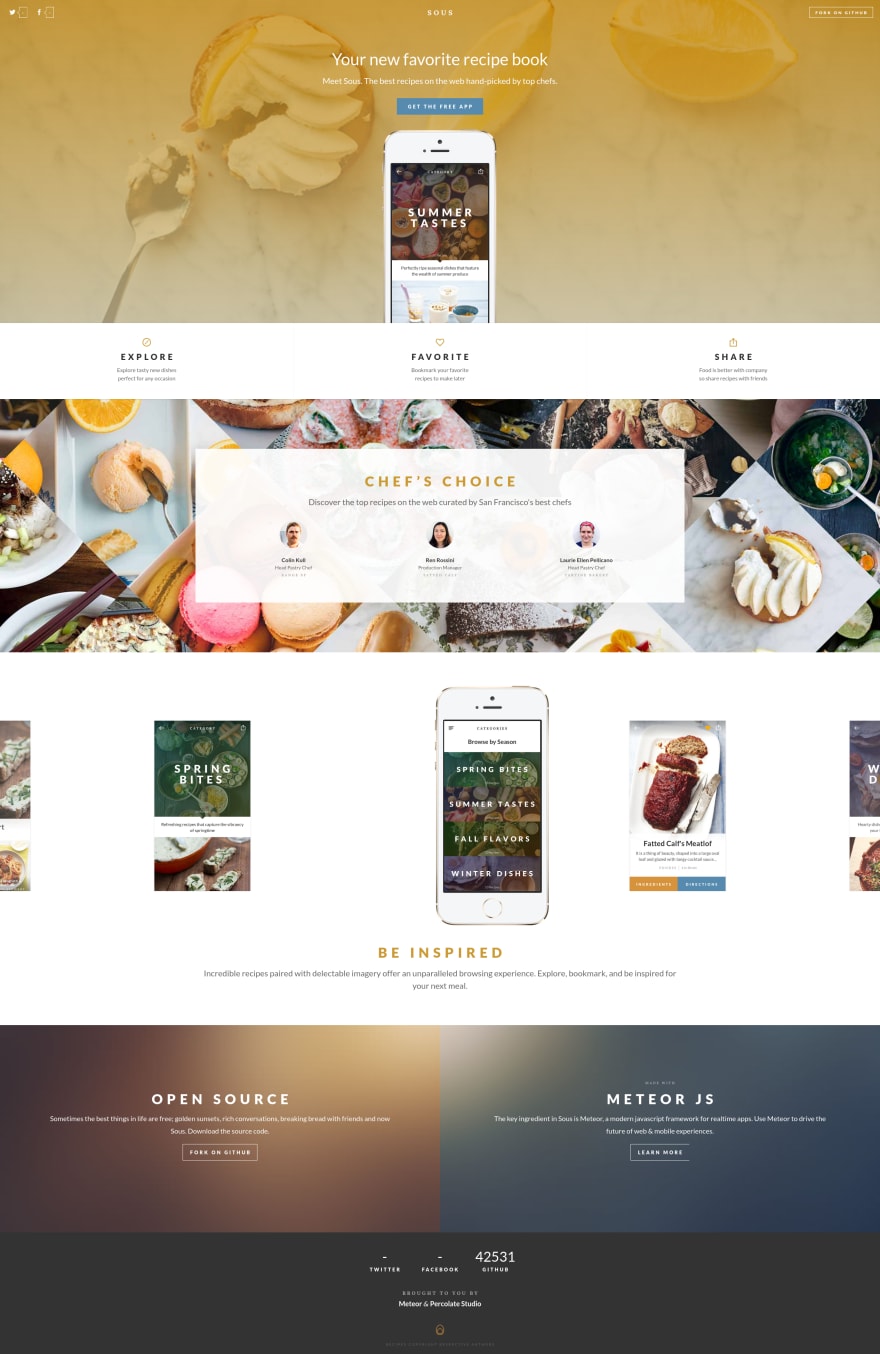 This one is a bit of a mystery. No description, but it looks like an early testing suite for publications and methods.

This repository has been turned over to MDG and became the leaderboard example. 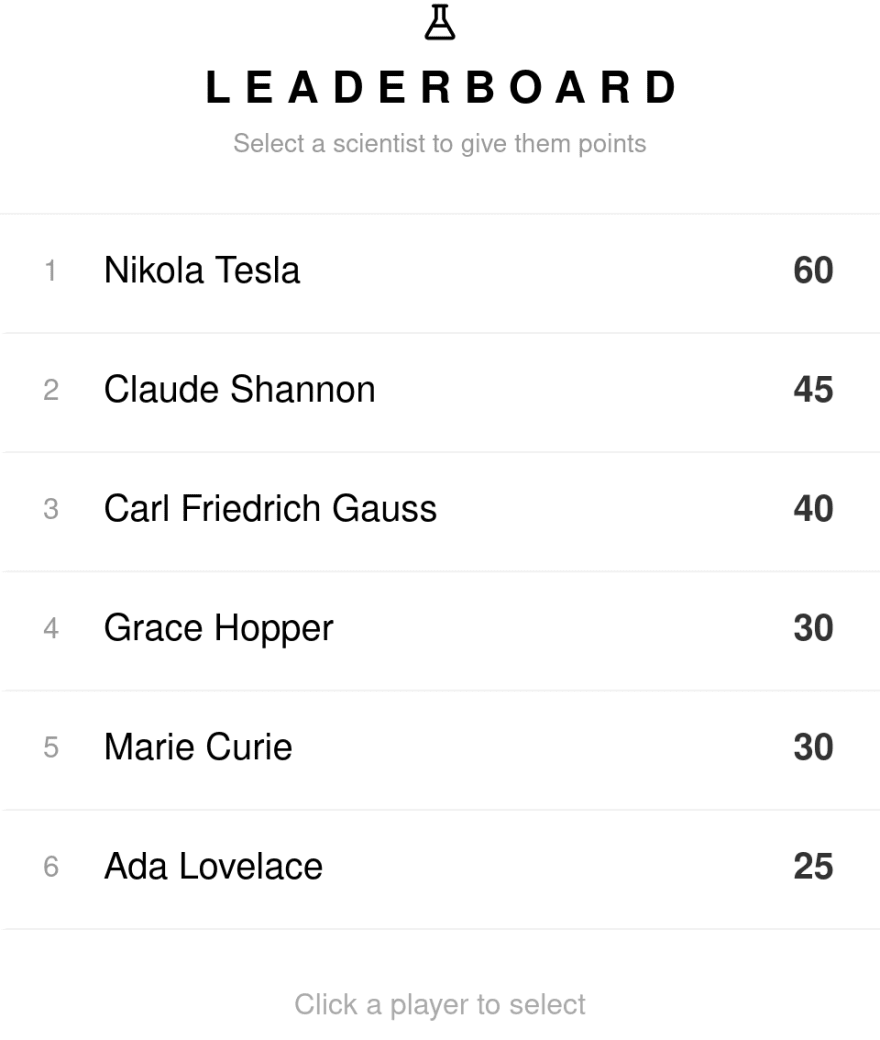 React version of the above leaderboard example, though pretty outdated to the current version of React.

League is a team management app written in Meteor in the old packaging system. Sadly I was unable to run the application to take a closer look.

This is a nice package that puts some basic server information behind an authentication so that you can have a service check the health of the server or have a high overview of what is going on on your server. Sadly this package won't work in the newest Meteor apps (2.3+) because it uses removed API calls. Also a general update is needed as well to get the package up and running.

Another package lacking in description. But this one seems to be focused on looking into performance of your collections in Meteor 0.9.2, so you will need to update it first to get it working in current Meteor.

This was in the days before Simple Schema to give schema/models to collections.

Percolate was always about nice looking apps with animations and this is one of the experimental packages that helped them in that direction. Designed to add re-usable animation in days before it was much easier with CSS. There is also an additional package to make this possible with Iron Router momentul-iron-router.

A light wrapper for using mixpanel in early Meteor app, at least until Percolate switched to segment.io and stopped maintaining this package.

A fully fledged url shortener with its own collection and everything else you need. Though as always you will need to update the package code if you want to use it today.

Percolate wasn't completely working in Meteor. This application is proof of that. This was an entry into the 2010 App my state competition in Victoria, Australia.

Not to be confused with the previous app, this one is a proof of concept of Meteor App for Apple Watch. Sadly I can't tell you more at this time as the app required login with Facebook as the only entry way.

A package for Blaze that binds form output to reactive dictionary.

This is a simple Blaze package to add placeholder blocks to an app that you will replace later. An addition to the prototyping aspect of Meteor.

Add-on package for Factory that allows unrestricted client-side creation of factory data. But with 6 years old code you will need to at least update package.js to get it running.

When Meteor does a Hot Code Push, there is the possibility of caching an unparseable JS file on the device. This will render the application completely broken and the only course of recovery is to uninstall the application.

SafeReload attempts to recover from this situation. After a window reload event happens in the web view, it will check to make sure that Meteor starts up. If not, the plugin will revert back to the originally installed binary version by deleting any HCP versions currently installed.

Since I'm not using Cordova for my apps yet I can't tell if this is something that is still an issue, but, if it is, you can still use this package today and it should work.

Now this is super old Meteor application (0.6.4), but one I will take to resurrect. Ground Control is a blogging platform build in Meteor.

As the repository name suggest, this is the source code for the Percolate Studio home page. This is not a Meteor app, but a static node app. They explain why in their architecture post.

A package by Tom Coleman designed to get counts for smaller collection in a more efficient way. As the note suggest not a good idea for large collections for which we have other packages today.

As the name suggest this is a package to make calls to Google API easier, but today this has been superseded by many other packages.

A package that is used by many to this day. This package allows you to create and run migrations for your DB.

From littledata:synced-cron Percolate took on maintaining this package, although under their own namespace. As the name suggest this is a simple cron that synchronizes cron jobs between multiple servers to make sure that it is run only once. Probably the most up to date package that kept getting updates into 2018.

Now that the overview is over, what Percolate project would you like to see to get updates again or revived?

If you like my work, please support me on GitHub Sponsors ❤️.

Can we have Sprint Demo as a Service?