What we have for you today​

Watch the introduction to PnPFlow​

Plug and Play on Windows​

Everyone loves plug-and-play. When you connect a printer or a disk to your computer, they just work, and you don't have to worry about having installing drivers or configuring devices.

Windows Plug and Play provides a set of rules for device discovery, driver interfaces, device configuration, and user notification. When everyone communicates according to unified rules, plug-and-play become a reality, end users can use devices without worrying how to set them up.

From the PC industry to the IoT world, the situation is even more complicated. Fragmentation in the IoT industry is a long-standing problem. There are many players involved, and there aren't well-accepted standards for interoperability. Complexity increases costs and slows down the progress of enterprise IoT deployment and digital transformation.

IoT Plug and Play is Microsoft's answer to IoT interoperability. Building an ecosystem to provide seamless integration between off-the-shelf devices and cloud solutions.

An IoT Plug and Play model uses the following interfaces to describe and model any device:

IoT Plug and Play is also part of the Azure Certified Device program which enables device developers to differentiate and certify their IoT devices and a central catalogue for customers to discover IoT devices.

The rise of Low-code IoT development​

The benefits of plug-and-play go beyond just connecting two systems, it is also useful for accelerating IoT hardware and software development.

To achieve hardware plug-and-play, the interface should be standardized and the hardware should be modular. Just like Lego building blocks, various prototypes can be easily designed. From the rise of Arduino to various open-source hardware, such as Microsoft Jacdac, device manufacturers want ways to make hardware connections less expensive and more convenient.

From a software development perspective, graphical programming and low-code development are very popular. NodeRed and Microsoft MakeCode are two great examples. Anyone can quickly implement business logic and build prototypes without requiring deep professional knowledge and programming skills. Countless innovative projects around the world use these platforms to solve real problems.

M5STACK is a great example of a company that builds products that are both modular and use low-code graphic programming, this makes IoT development easier.

M5STACK, based in Shenzhen, China, is a technology company that designs and manufactures open-source IoT development devices for the global market. They're also an IoT device partner of Microsoft Azure, offering IoT modules and engineering services to enterprise customers. 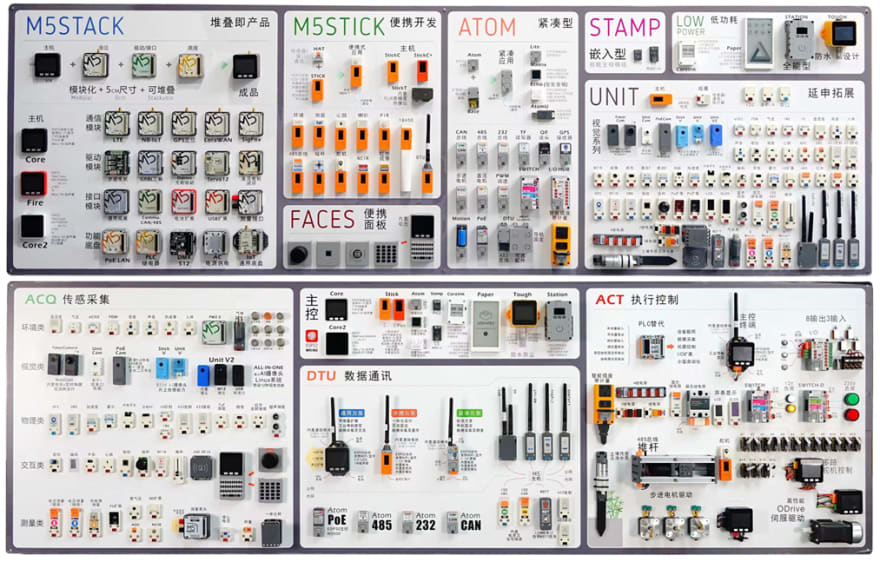 M5STACK builds hundreds of sensors, actuators, and communication modules that can be connected through standard interfaces. These modules plug and play with the UIFLOW low-code graphical programming IDE to give the best IoT project prototyping experience from entry-level hobbyists to professional developers.

With UIFLOW, a user builds a solution with single blocks, or they can implement more advanced scenarios by combining several blocks. For example, blocks can be combined to move data between industrial networks like Modbus to internet services over TCP/IP without requiring a deep understanding of these protocols.

M5STACK aims to cooperate with other companies to create a more open and interconnected IoT developer platform. Their kits are certified for Azure IoT Plug and Play. UIFLOW has advanced Azure IoT support built-in. Users can build a device with just a few clicks to connect to Azure IoT Hub or Azure IoT Central.

Project PnPFlow is the latest collaboration between M5STACK and the Azure IoT team. A better together experience for developer to build an IoT Plug and Play device without knowing the complexity of Plug and Play protocol and DTDL model. All you have to do is to drag and drop blocks to build a business-centric application in UIFLOW. The device will be automatically provisioned on Azure IoT Central and seamlessly will work with IoT Central template based web-UI .

Are you exciting about Plug and Play IoT development? Get some devices from M5STACK and go to UIFLOW to test it out.

What is Wia, and how I can use it

Publish an Event with ESP8266 to Wia via CoAP API

Thanks for keeping DEV Community safe. Here is what you can do to flag azure: