Our end goal is in reach: we now want to write a basic ML script for Python 1.6.

What "ML" do we want to write?

So here's the first question: what "machine learning" script or program should I develop?

First, we should consider computational power is limited. NeXT machines ran at double-digit megahertz speeds. Whatever algorithm we choose needs to be relatively simple.

This is not to mention that even relative to our limited computational power, Python is going to be slow. Nowadays, with supercomputers in our pockets, I think we often forget that Python is a "slow", high level language. When you are working on early 90s hardware, this point will be clear. (So GPU-enabled deep neural networks are off the table for now.)

Ultimately, I decided to implement the logistic regression algorithm. It's a classic binary classifier - often one of, if not the, first taught - and I love its elegance of transforming the classic linear model into the odds ratio into a probability.

For a visual refresher of the whole process, consider this video.

For data, I ran with the classics - I decided I would work with the Iris dataset. This is a data set most often used for multiclass classification, so we'll have to convert it into a binary classification problem.

A copy of the dataset is readily availble from the UCI Machine Learning Repository, and is easy to transfer to Previous with our NFS.

Interestingly, NeXTSTEP doesn't seem to have an IDE in our modern sense. There's Project Builder, which is certainly intended to be the "hub of application development", but this doesn't have a dedicated text editor environment - it offloads that duty to the "Edit" text editor utility.

If we're just working in text editors, we might as well default to the classic development environment: multiple terminal windows running a shell and Vi. (Vim isn't available by default on NeXTSTEP.) 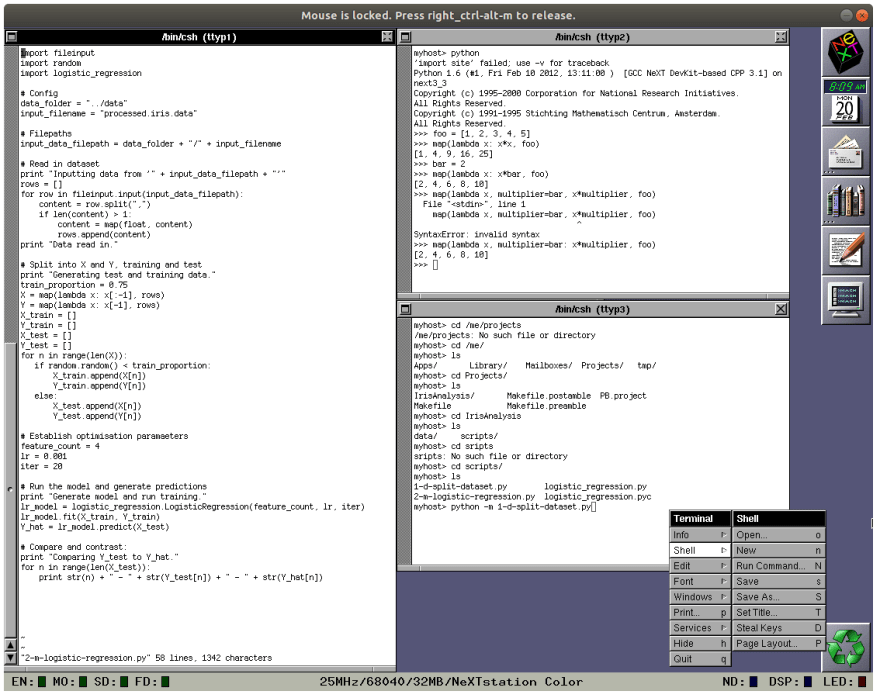 I wish this looked cooler. I'll have to figure out how to make it neon green text on a black background.

With the "development environment" up and going, I got to work on writing the scripts:

If you look at the code in the above files, it definitely looks like modern Python. Most of the hallmarks are there - indentation, clean syntax, all the things we love.

There are definitely a few major and minor differences in Python 1.6, though. In particular I noted:

Overall, while it's missing a lot of modern conveniences and there are some syntax differences, it's surprisingly quick to get moving in, provided you have the documentation open.

(I still desperately miss numpy and pandas, though.)

The proof in the pudding

Okay. Final proof. If we call the entry point to our machine learning script, will it run? 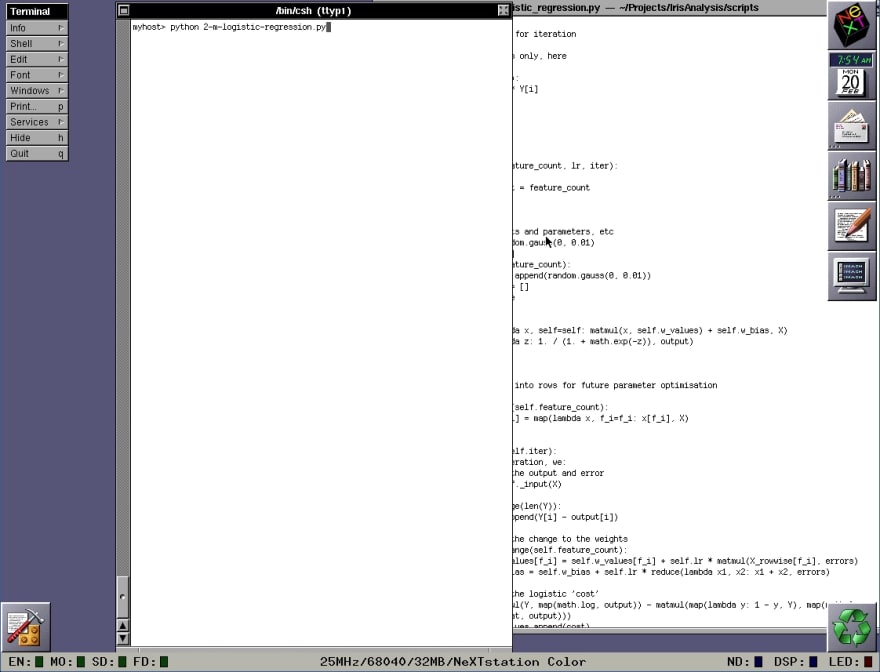 Yes! Albeit pretty slowly. Regardless, it was wonderful to see these scripts running to completion after all of the hard work and tweaking required to get to this point.

In this first article of this series, I set out to a challenge with three components:

The challenge has been achieved, and this silly trophy has been claimed!

Overall, this has been a really fun experience and a good way to spend a couple of weekends. Besides satisfying my curiosity around NeXT and NeXTSTEP, I've certainly picked up bit of technical know-how as well - in particular, I've broadened my horizons around software compilation (modern and otherwise) and *nix disk management and mounting.

That's all there is - I hope you've enjoyed this series, and I hope you can use my materials provided in these articles to pursue your own NeXT adventures.