At this point, I've managed to get the NeXT machine emulator going, found and launched NeXTSTEP 3.3, and even connected it a file server on my local network. We're almost ready to start compiling Python 1.6 from source - we just need to make sure we have the tools to do so.

Our goal in this session is to get some standard developer tools in NeXTSTEP installed so we can compile Python 1.6 from source.

What "developer tools" do we need?

The standard implementation for Python is "CPython" - this is the Python programming language written in C and Python code. (For interest, there are various other implementations such as PyPy or Jython that are worth exploring.)

CPython 1.6 is what we aim to install, so we'll need make sure we have some version of the standard C development tools installed.

...Do we already have them?

If you bought the $4,999 developer edition of NeXTSTEP/OPENSTEP, it shipped with "NeXTSTEP DEVELOPER", a second disk that had all of the NeXT development tools (see section 3.5 here for more details). This disk includes a precompiled instance of GCC, include files, linker libraries, and all of the custom NeXT software that made developing software 10x faster (according to NeXT's marketing team). These tools should be what we need.

However, none of the these programs and utilities are currently installed. This makes sense - the pre-built disk image I used to NeXTSTEP 3.3 was totally fresh and appeared to be at the first config step, so it's up to me to install those tools! 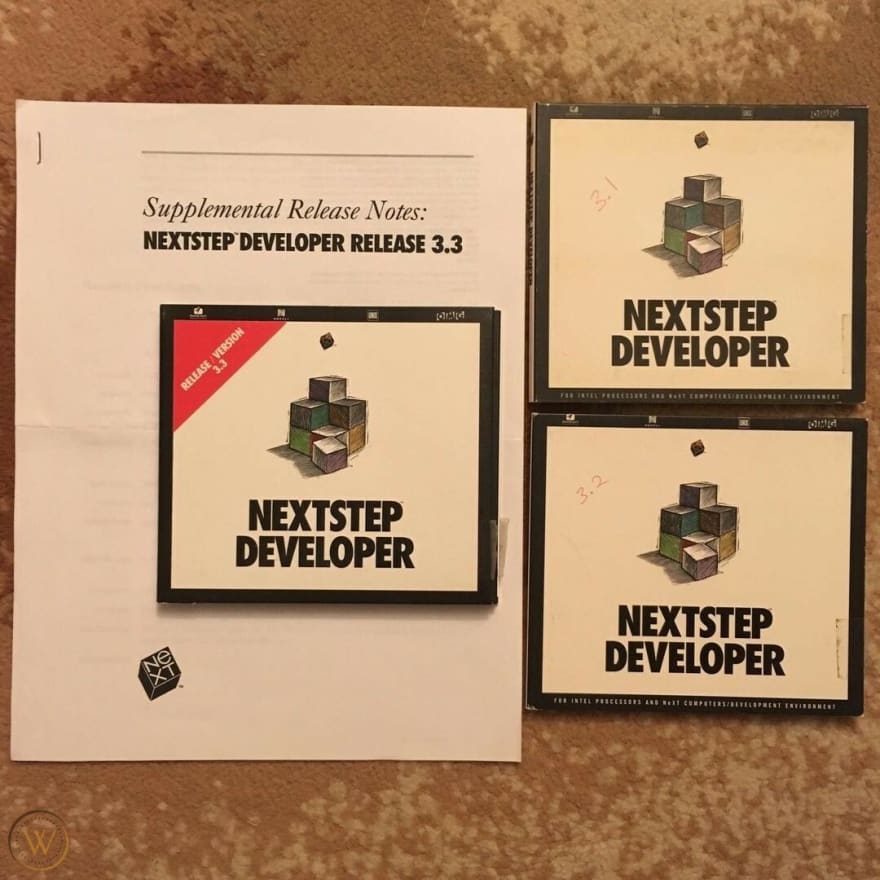 Very quickly I was able to find an ISO (disk image) of NeXTSTEP DEVELOPER on WinWorld, the same site that hosted the pre-built disk image of NeXTSTEP 3.3 I'm running. Thanks, WinWorld!

We've got an .ISO file sitting on our harddrive - now we have to get that into our virtual environment.

First, we need to mount the image into our environment. To do so, we'll use the SCSI connection options within Previous to create a virtual disk drive, and then mount the .ISO file. Our SCSI connections should look like this: 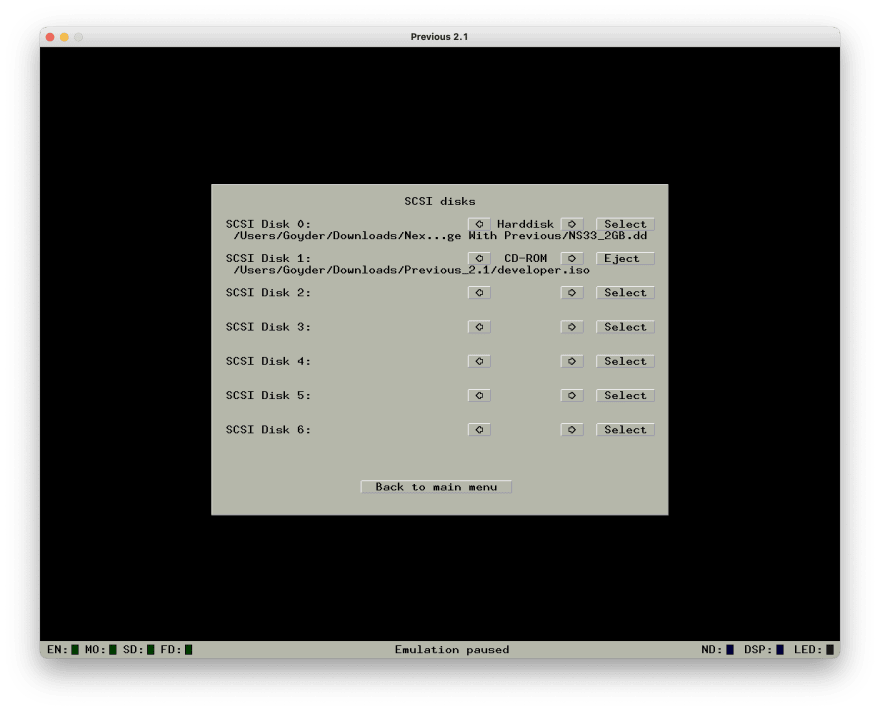 Effectively giving us a pretty standard machine, with a harddrive and CD drive attached: 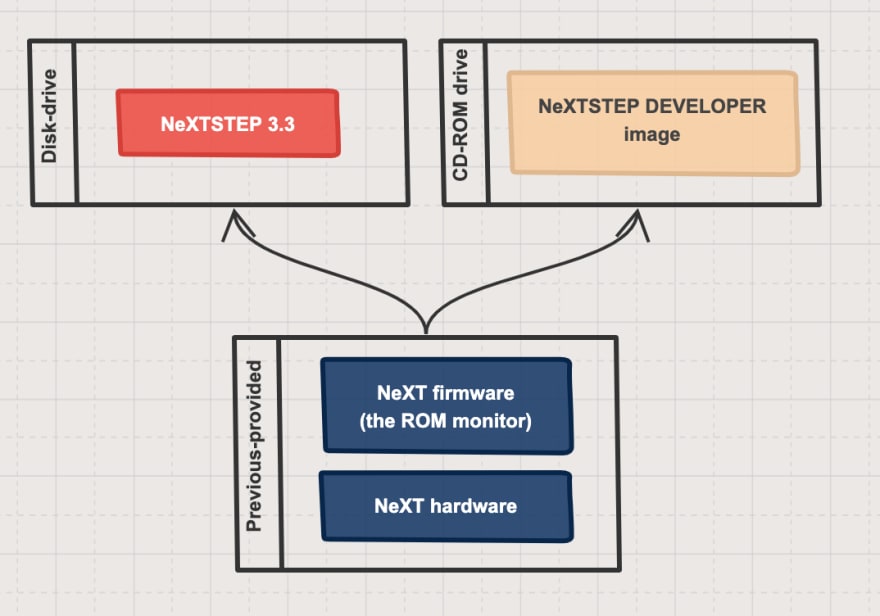 NeXT recognises the CD and it shows up as a new drive, just like on a modern Mac: 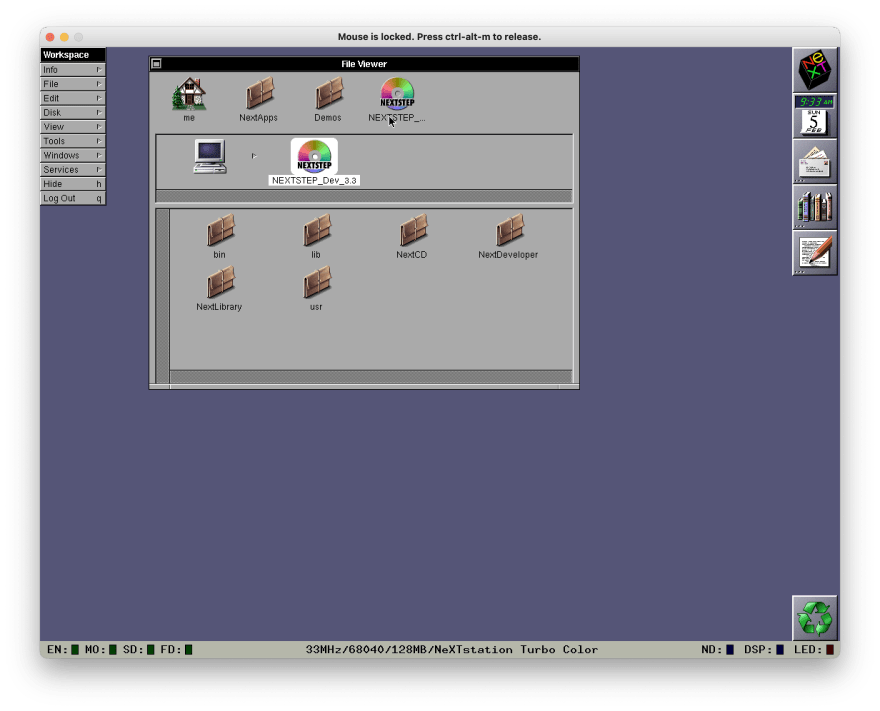 With the disk ready to go, we can now install the development tools. It turns out this is super straightforward - under the path NextCD/Packages/ there are four .pkg files:

And when we open these files, they load in NeXT's in-built Installer app, making installation a breeze. Just make sure to launch them as a user account with sufficient permissions via the OpenSesame utility.

Not knowing what order these should be loaded in (and noting that others were unable to find much information on install order, either) I went ahead and started installing in the following order DeveloperTools, DeveloperLibs, GNUSource, and finally DeveloperDoc.

Each installation was successful on the first run (provided I remembered to run with sufficient permissions!): 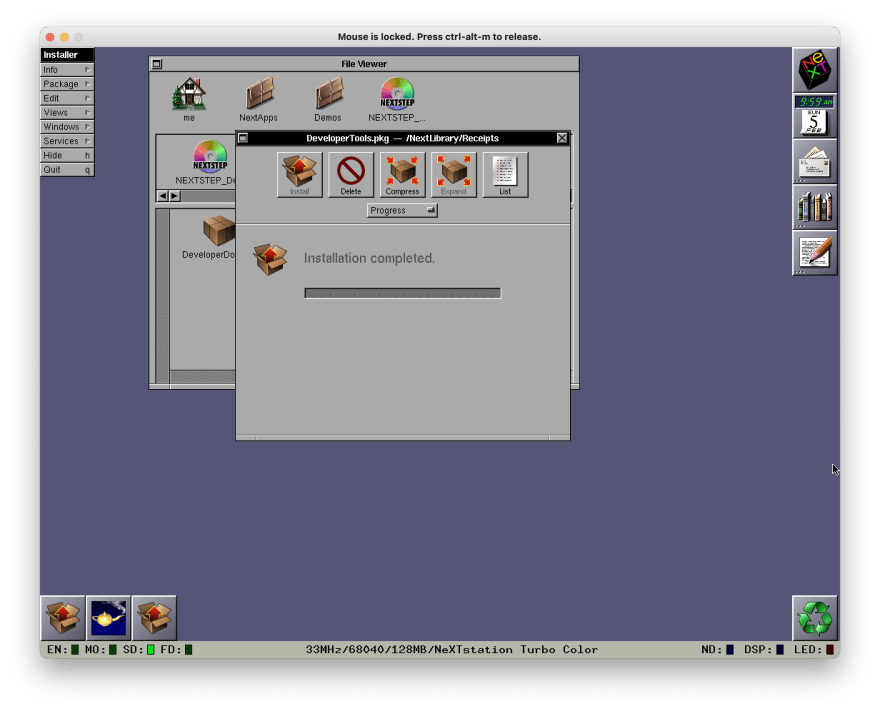 All in all, a surprisingly smooth process.

A final test to make sure this works

To make sure that we actually have a working set of C development tools working, let's write the classic stub of "Hello World" and make sure it compiles.

And fire off the compilation command and verification to check that it works:

And as we can see from the following screenshot - all good! 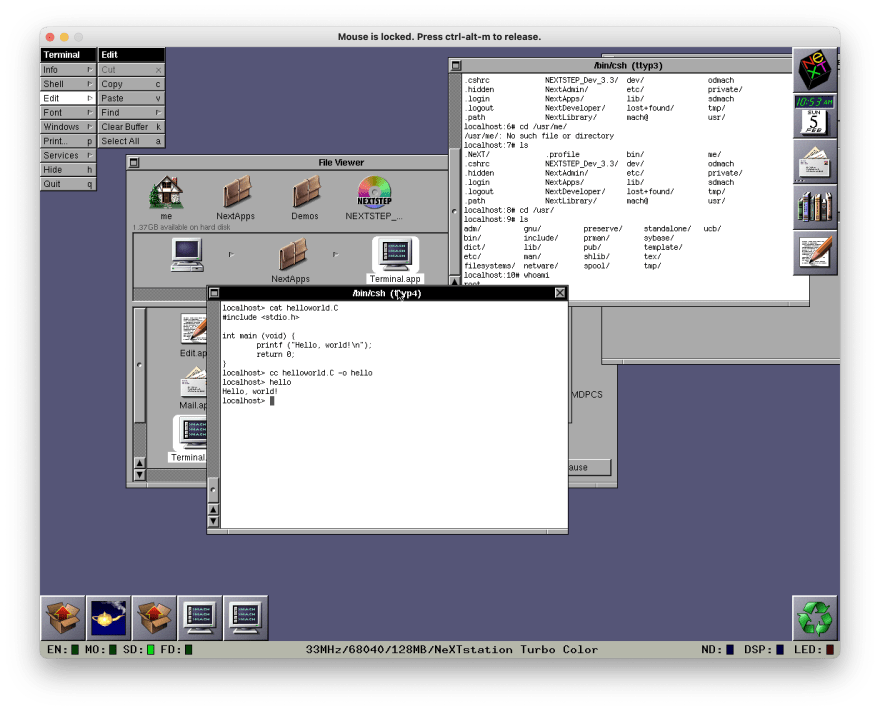 We've passed a basic smoke test and can venture into deeper waters.

With a working C compiler, we can now attempt to compile Python 1.6 from source.

Considering the scope of our "Hello, world" test run, this is a bit like going from building a blinky LED circuit to constructing a Volkswagen Mini, but fortune favours the bold!

Once unpublished, this post will become invisible to the public and only accessible to goyder.

Thanks for keeping DEV Community safe. Here is what you can do to flag goyder:

Unflagging goyder will restore default visibility to their posts.