We're now at the pointy end - it's time to attempt to compile Python 1.6 from source.

Our goal for this session is simple and clear: compile Python 1.6 from source, and confirm the interpreter works.

The source code for Python 1.6 is actually still available on the main Python website, although it's not well advertised nowadays.

Using the NFS previously set up, it was straightforward to move the source tarball into Previous, unpack it, and start to look through the README. 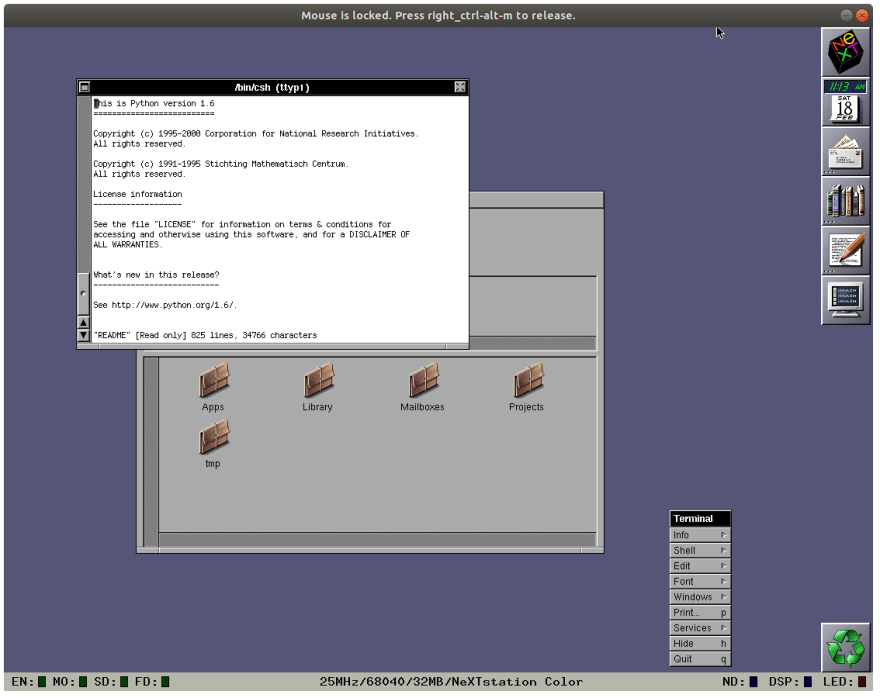 It's always valuable to look at the README.

Flicking through the README, I note that there's special installation instructions for each platform, including NeXT... however, there's nothing other than a note about "fat binaries" (a term which prompted a Google from me, but not much else).

The build instructions are straightforward: first, I just have to run the script ./configure, which I promptly do. This runs through a huge number of checks, all of which are satisfactory: 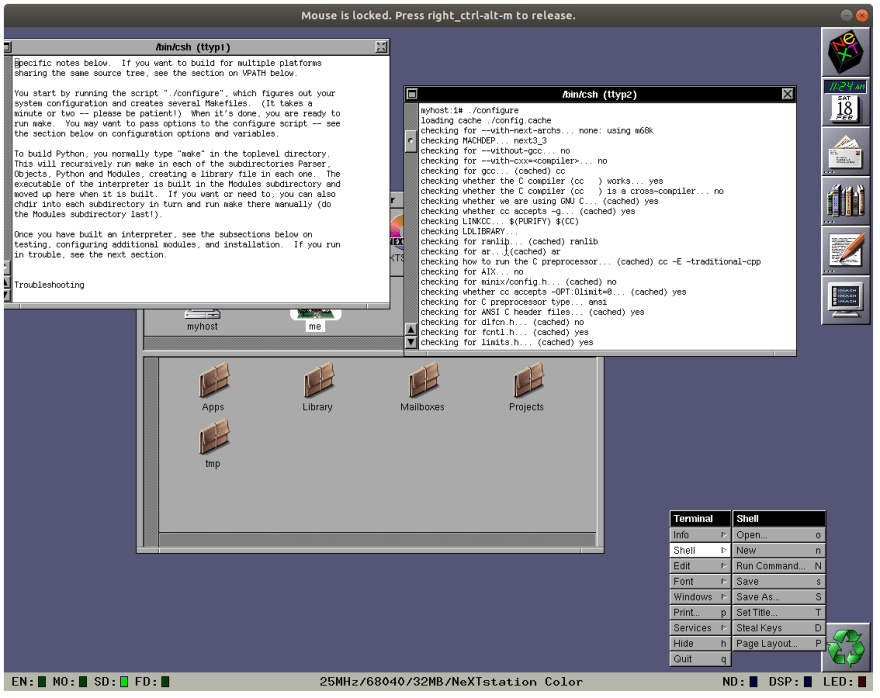 And then I just have to run ./make, which begins strongly: 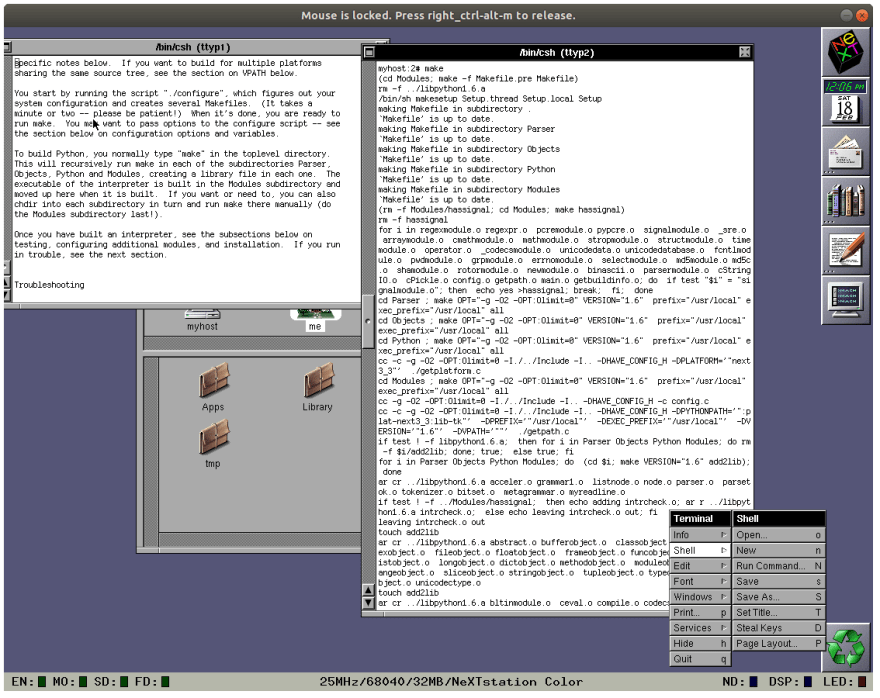 Look at those compilations fly!

Pretty quickly after compilation, it halts with the following error: 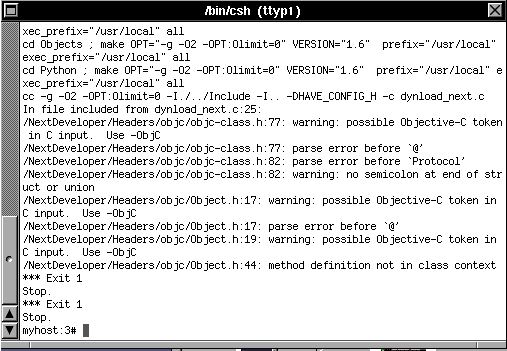 Seems like there's an issue with the NeXTSTEP DEVELOPER provided C standard library implementation - apparently they've mixed in some Objective-C. This is maybe not surprising (Objective-C was the primary language of choice for NeXT, and for Apple products from OS X onwards until Swift came along), but I am a little surprised it would be implemented in such a way to crash regular C compilation.

Fortunately, the fix has been provided in the error message (that's friendly!) and that can be implemented under compiler options in the very well organised Makefile, changing

With this change made, calling make has the compilation process buzzing along!

However, this doesn't last. Once we get to the Modules section of the compilation process, it bombs out on a compilation error - not enough arguments for a C function, it seems.

I'm not terribly familiar with C compilation, so I'm really coming up the learning cliff on this one, and I take a bit deep dive. After a fair bit of investigation I find:

Or, summarising these findings up in a chain of "whys": 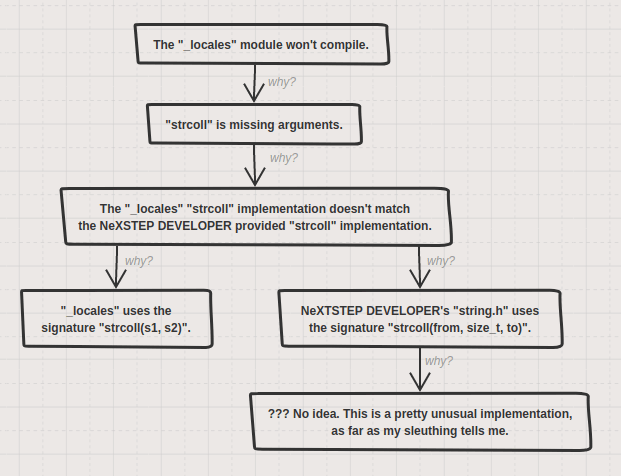 Overall, something's a little awry here - I would love to find out the history of this strange implementation, because I could find naught in my searching.

A limiting, but effective, workaround

Thinking there might be a solution in the README, I went back and re-read it. After reading from top to bottom, I found an interesting message for installing under SunOS 4.x:

When using the standard "cc" compiler, certain modules not be compilable because they use non-K&R syntax. You should be able to get a basic Python interpreter by commenting out such modules in the Modules/Setup file, but I really recommend using gcc.

This sounds good. We're certainly getting errors due to non-standard syntax (although perhaps not like they meant).

I'd previously looked into gcc, but couldn't find a non-NeXT provided implementation for NeXTSTEP. However, a "basic python interpreter" could certainly be sufficient.

Sure enough, I was able to jump into the Modules/Setup file and begin commenting out the troublesome modules as they cropped up during compilation. (Interestingly, it seems there's a lot of intended variation in what modules to install, based on the notes within this file.)

This feels janky, but effective. I can only hope the finished product is sufficient for my needs.

Slowly but surely I made progress until it is complete: the make process ran to completion (approximately 1 hour of uninterrupted compilation time) and I am greeted with a single blessed python executable file.

I run it, and I am greeted with the beautiful sight of a Python interpreter (and one minor error): 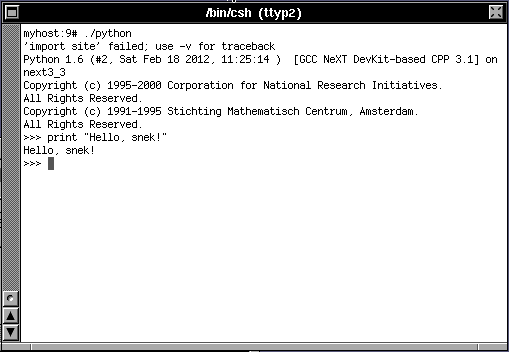 [GCC neXT DevKit-based CPP 3.1] on next3_3 - I'd like to think that's a compilation message that isn't often seen.

I ran some basic tests, instantiated and worked with a variety of data types - the interpreter seems good and functional. Success!

With the Python interpreter up and running, the only thing left to do is write the basic machine learning script in mid-90s era Python and claim victory!

How to clone a Django project from Github and run it locally (MAC IOS).