As outlined in the previous article, I've managed to locate, compile and launch the emulator for the NeXT hardware, charmingly named Previous.

At this point, it's a bit like the point where you've bought and assembled your PC but not yet installed the operating system (OS). What and how are we going to install on this fresh machine?

The high level goal here is to get some instance of NeXTSTEP up and running on Previous.

That sounds relatively straightforward - Previous is, after all, a emulator designed to run NeXTSTEP, so it shouldn't be that hard, should it?

Defining hardware vs software and the little inbetween

The first thing I found I had to get clear in my mind was what Previous was, and what it wasn't. This was a little fuzzy because of what you get when you first run Previous.

When you boot Previous with the absolute default settings, you are greeted with a very limited command-line interpreter - is this the boot-up of NeXTSTEP? Is this our OS? 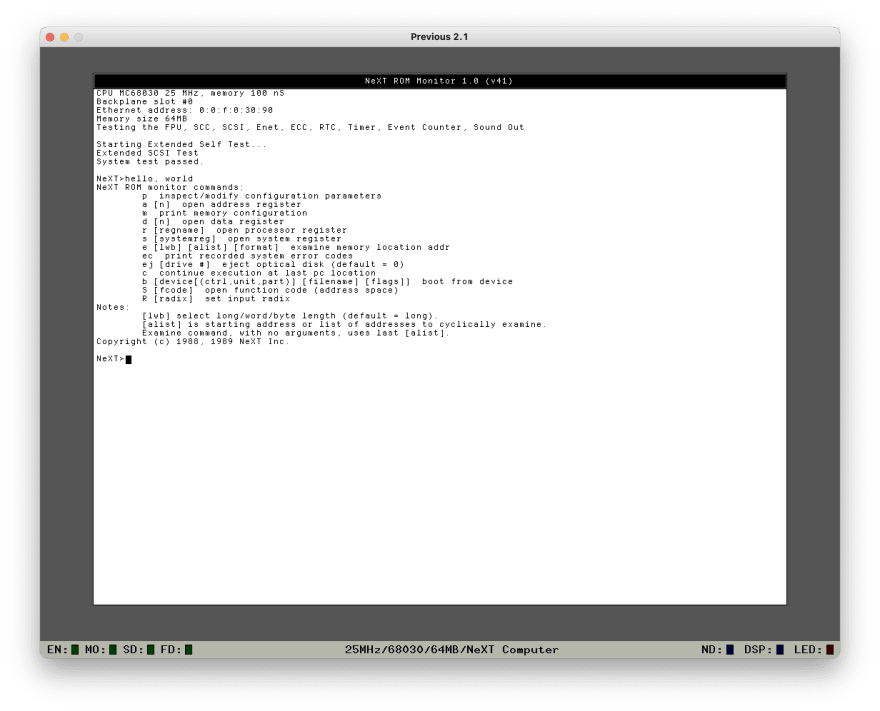 This is essentially the BIOS of the device. This is best described as firmware - low level software that talks close to the hardware. We can use this to boot into our OS.

But we are missing an OS to run on top of these. 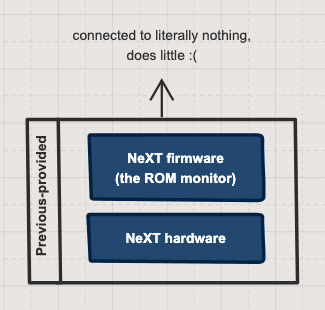 How do we get an Operating System?

The first question one might have is "where do you get 30 year old operating systems?", and the answer is, unsurprisingly, "the internet".

NeXTSTEP comes under the broad banner of "abandonware" - software that is ignored by its owner and manufacturer (the fact that NeXT went defunct 24 years ago may explain this). Crucially, this means that this software will often be archived and freely shared online, which is exactly the case here.

What version of NeXTSTEP to install?

A huge amount of development went on during this time, and hardware and software compatibility varied, so picking the right version is important.

After doing a bit of digging, I decided on NeXTSTEP 3.3 to start. This was the last version under the "NeXTSTEP" name, and was apparently quite mature and trusted - a lot of the references I see in software and READMEs are to this version.

From scratch or pre-built?

Okay, if we're going to run with NeXTSTEP 3.3, how do we want to go about doing so? We actually have a couple of options:

First, we can get copies of the original boot floppies and do a completely fresh install on a totally empty "hard-drive" using Previous - this is akin to putting in a fresh, blank hard-drive into your new computer and doing a fresh install from the system CD/USB. 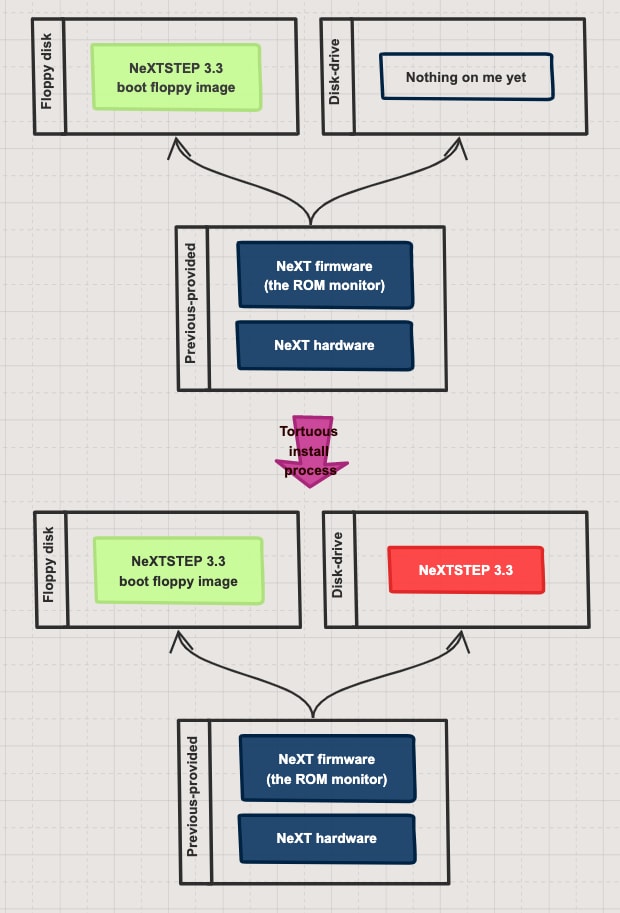 Secondly, we can download an image of a hard-drive that already has NeXTSTEP installed and boot that - a bit like putting in a hard-drive from your old machine with Windows already installed. 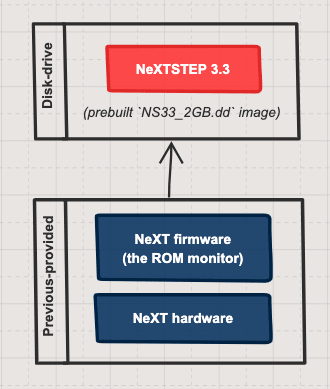 Ultimately, I went for the latter option - while I found some guides for installing from scratch, this path seemed fraught with challenges that may be NeXT and may be the emulation - a recipe for disaster. Let's take the "safe way" and see how that goes.

I picked the "NeXTSTEP 3.3 HD" download from WinWorld and away I went. (The fact that there have only been 72 downloads of these images in total via WinWorld makes me think I'm down a pretty esoteric path.)

Inside the compressed file, you'll find a file called NS33_2GB.dd - this is a pre-built image with NeXTSTEP 3.3 installed to the point where it's ready for you, the user, to start configuring and using it. It also includes a robust README that explains in very welcome detail exactly how to configure Previous to get the image up and going (neatly moving past the confusing ROM monitor from above).

When I followed those instructions, the boot went smoothly and I was greeting with a config screen: 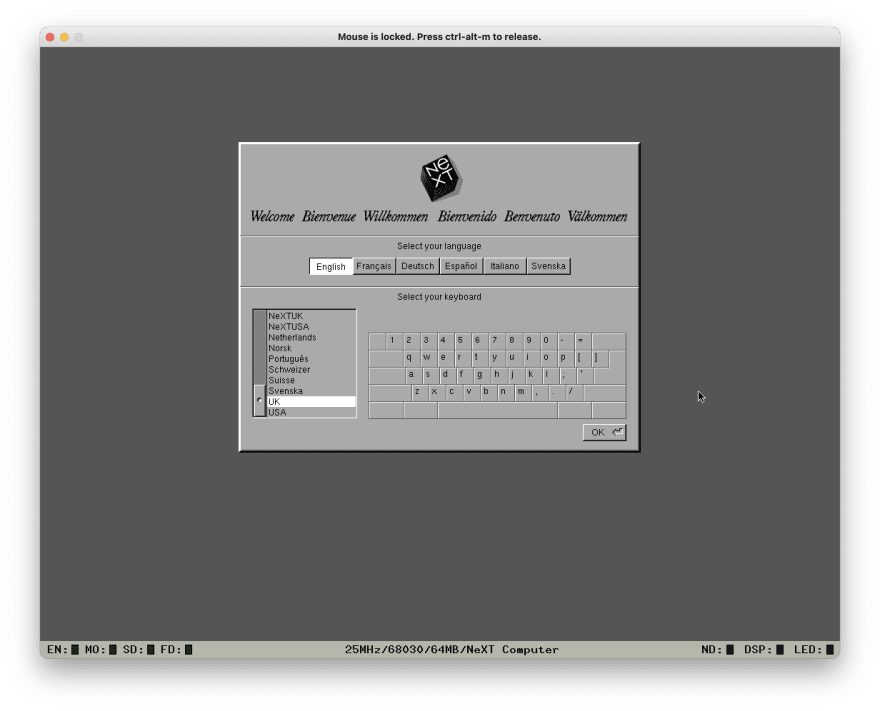 And, following the initial configuration and booting up the Mailbox app, I was greeting with the "famous" welcome email from the man himself, Steve Jobs: 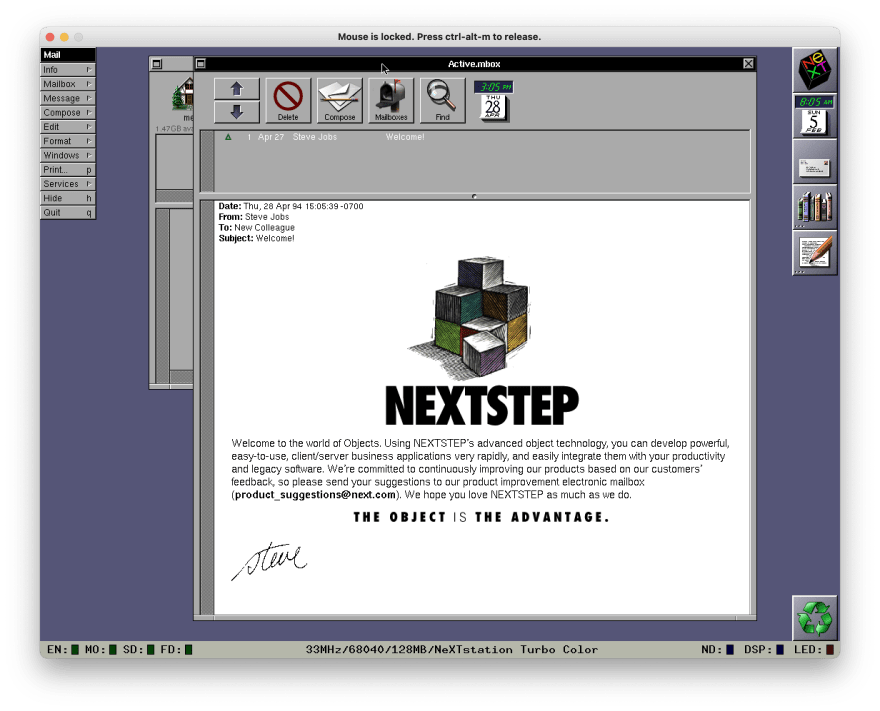 Looking good - NeXTSTEP 3.3 is up and running! Now to start using it...

With a fresh install of NeXTSTEP, we now have to figure out how to use it.

In this sesh, we:

How to work with Django forms.

Questions whose answers are worth knowing in Machine Learning for beginners!