Hey I am here with the second part,

So let's start with a problem.
Suppose you were given the following input and output values.

Take a closer look at these numbers and let me ask you a question.

Can you figure out what will be the output value if you put in 38 as the input value?

For example, an input value of 0 refers to a temperature of 0 degrees Celsius,
which corresponds to 32 degrees Fahrenheit.

Similarly, an input value of 15 refers to a temperature of
15 degrees Celsius which corresponds to 59 degrees Fahrenheit.
We get 59 by multiplying 15 by 1.8 and adding 32 like we see here in this equation.

What your brain just did to figure out the relation between these particular inputs and outputs, that's exactly what machine learning does.

Suppose you wanted to write a computer program that can convert degrees Celsius to degrees Fahrenheit using the relation F equals C times 1.8 plus 32.
With traditional software development, this relation can be easily implemented in any programming language by using a function.
In Python for example, this function will look like this. 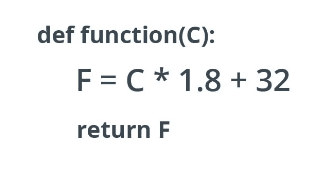 In very simple terms,you can think of the machine learning algorithm as a function that can tune variables in order to correctly map some inputs to some outputs.

Let us continue this to another one.

How to Easily use GRPC and Protocol Buffers with NodeJS

From firefighter to web developer (via nursing) - how Lee did it