Hey there,
This is most likely the third one in the series.

Lets start off with an intersting story

In ancient times, a King had a boulder placed on a roadway. He then hid himself and watched to see if anyone would move the boulder out of the way.Many of them goes around it without even caring the boulder.Many people loudly blamed the King for not keeping the roads clear.A peasant then came along carrying a load of vegetables. Upon approaching the boulder, the peasant laid down his burden and tried to push the stone out of the road. After much pushing and straining, he finally succeeded.After the peasant went back to pick up his vegetables, he noticed a purse lying in the road where the boulder had been.
The purse contained many gold coins and a note from the King explaining that the gold was for the person who removed the boulder from the roadway.

Every obstacle we come across in life gives us an opportunity to improve our circumstances, and whilst the lazy complain, the others are creating opportunities through their kind hearts, generosity, and willingness to get things done.

Always carry a load of vegetables

This example is the general plan for of any machine learning program. You will use the same structure to create and train your neural network, and use it to make predictions.

The training process (happening in model.fit(...)) is really about tuning the internal variables of the networks to the best possible values, so that they can map the input to the output. This is achieved through an optimization process called Gradient Descent, which uses Numeric Analysis to find the best possible values to the internal variables of the model.

To do machine learning, you don't really need to understand these details. But for the curious: gradient descent iteratively adjusts parameters, nudging them in the correct direction a bit at a time until they reach the best values. In this case “best values” means that nudging them any more would make the model perform worse. The function that measures how good or bad the model is during each iteration is called the “loss function”, and the goal of each nudge is to “minimize the loss function.”

The training process starts with a forward pass, where the input data is fed to the neural network (see Fig.1). Then the model applies its internal math on the input and internal variables to predict an answer.

In our example, the input was the degrees in Celsius, and the model predicted the corresponding degrees in Fahrenheit 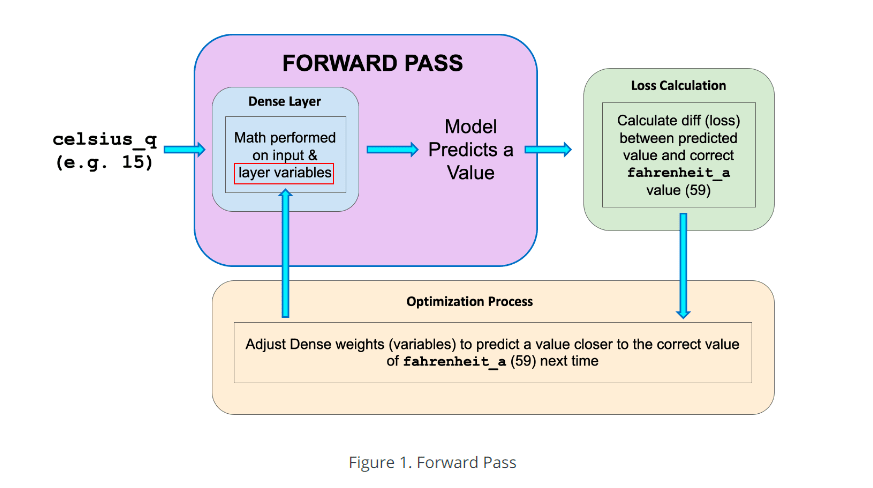 Once a value is predicted, the difference between that predicted value and the correct value is calculated. This difference is called the loss, and it's a measure of how well the model performed the mapping task. The value of the loss is calculated using a loss function, which we specified with the loss parameter when calling model.compile().

After the loss is calculated, the internal variables (weights and biases) of all the layers of the neural network are adjusted, so as to minimize this loss — that is, to make the output value closer to the correct value (see Fig. 2).

This optimization process is called Gradient Descent. The specific algorithm used to calculate the new value of each internal variable is specified by the optimizer parameter when calling model.compile(...). In this example we used the Adam optimizer.

By now you should know what the following terms are:

Very much interested in working with a space exploration team. Interested in human body anatomy. Currently a dev

An Intro to Raw React APIs

Sandeep Balachandran
Very much interested in working with a space exploration team. Interested in human body anatomy. Currently a dev
How to add custom theme in keycloak
#webdev #productivity #beginners #tutorial
How to install keycloak in local machine
#productivity #webdev #beginners #tutorial
How to loop through object properties with ngFor in angular
#javascript #angular #humour #beginners