In previous blog, we looked into the .describe() function of pandas and tried to understand it.

We will be using seaborn which is just an extended form of matlplotlib for visualization.

As our dataset contain quite a number of features 84. It is difficult to visualize it in a single graph. So, for better understanding we divided the feature sets into subset and visualize each of them individually.

Just like below we can visualize any interesting statistics coefficient by passing into function such as mean, 50% etc.

Let's visualize the BarPlot for std. 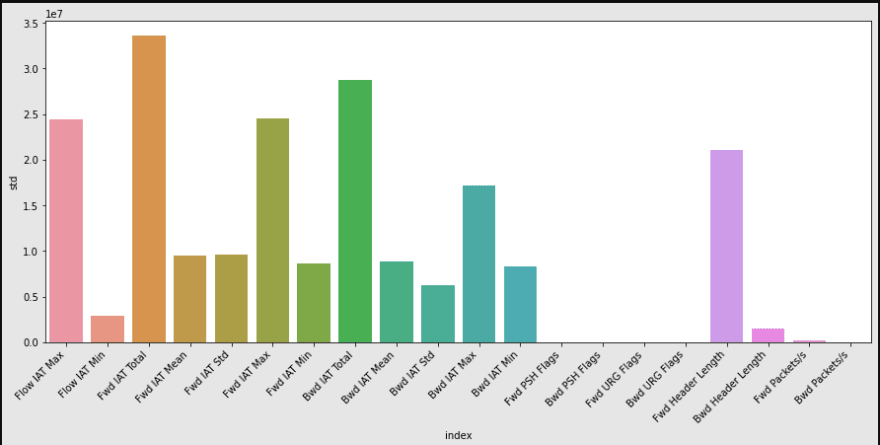 Fwd Header Length has a value of approximately 2.5 x 10^7 which indicates that the most of the value lies in the range of mean-std to mean+std. We know from the .describe function that MEAN for Fwd Header Length is -2.600024e+04.

Another, thing which in worth noting is that most of features are showing std near to zero. But as the unit of measurement is exponenital. We can't have a correct idea. Let's find which features have exact zero STD. 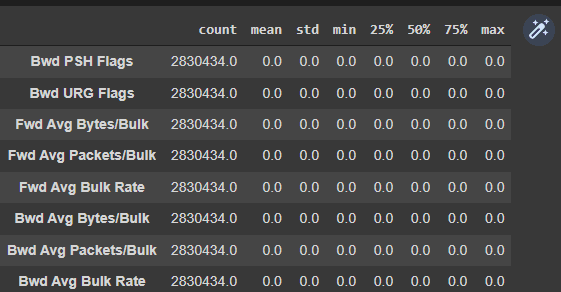 These features with ZERO standard deviation doesn't really contribute in learning of the machine learning model. We better of removing them before trainning the actual model. We will do this in the cleaning phase.

We can clearly see from the graph that all features have a larger MEAN than the Median which is the strong indication of outliers.

To get more insight that outliers are in the first quartile or the last quartile. We will call the following

One important aspect of understanding our dataset is seeing how different features corelate to each other.

Correlation measures the degree to which two phenomena are related to one another. For example, there is a correlation between summer temperatures and ice cream sales. When one goes up, so does the other. Two variables are positively correlated if a change in one is associated with a change in the other in the same direction, such as the relationship between height and weight. Taller people weigh more (on average); shorter people weigh less. A correlation is negative if a positive change in one variable is associated with a negative change in the other, such as the relationship between exercise and weight.

We can pass in the name of the feature to the function. We want to see correlation w.r.t to all other features just like we are doing with Flow Duration below.

The machine learing models work with numerical data. But often we have the categorical/string data. So, in order to make use of these features in our dataset. We need to make sure that these string features are represented in the numerical form which can be done in different way. We will see in the future blog. In order to do this first, we need to know which features are string features.
We can find them using the following way

Finding the feature/Column with Null Values

We need to deal with the Null/empty values as it effect the learning of our models. So, if one features has most of it's value as Null. Then, we may be better of excluding it. However, there are other ways of dealing with empty values.

Only FlowBytes/s feature contain the Null values. But to be exactly sure about how many of the values are NUll for FlowBytes/s.

If there is any Null/None value in the entire dataset.

What is the name of the features/Cols with null value.

Let's find out our dataset is balanced or not. Usually Balanced dataset is desired.

We can clearly see that our dataset is highly inbalanced which is a problem indeed.

But do not worry. We will see how can we balance this dataset in the future blog.

In case if there is some issue or I have gone wrong somewhere. Your feedback is welcomed.

The Easiest Database you could ever need!