There are three broad categories of methods for Feature Selection.

These methods are based on the intrinsic (natural) properties of the features itself. We don't use any classifier or model at this point.

If the variance for the feature is large such that data points are very spread out it tells that these features data points are very useful for distinguishing b/w different training examples. It will be easy to come up with boundaries to distinguish different data points if there is variance. The larger the variance the more better it is so we can simply remove the features with low variance. This is also known as UNIVARIATE Statistic. As only a single feature is involve. Another fancy term we often use is Information Gain that how much a feature contribute in distinguishing different data points.

The advantage of calculating variance is that it's really fast. And, the major disadvantage is that it doesn't take into account the relationship among features.

If we are involving more than one feature for the computation than it's nothing but Bivariate Statistics.

When two features are very correlated then we know that one feature is redundant and probably we can remove that from the dataset without losing too much information.

If we have a feature which are highly correlated with target variable than they are good features to use. Especially in the case of Linear Regression.

Pass in the name of your Target variable to the above function.

We know that Standard Deviation tell us about how spread out the data is in other words how much our data points deviates from mean on average. Whereas, Variance is nothing but the square of the Standard Deviation it also help us to understand the correlation b/w variables.

Anova also help us to find the correlation b/w the variables. 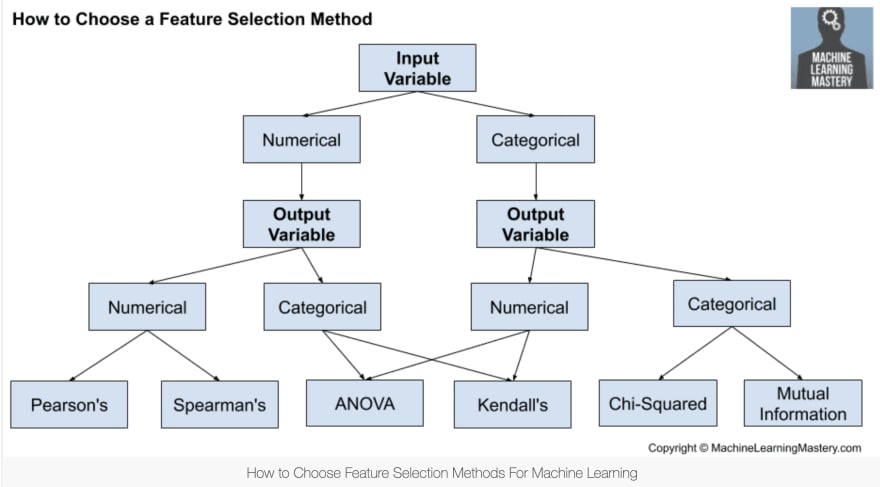 How Anova Selection for Feature Selection?

The thing is the F Ratio is calculate for each feature with the Target variable. We select the features with the highest F Ratio/Score as they are the most important.

This is just one of the many examples. We will look each of them in great details in the upcoming blogs.

They are based on our main objectives. For instance if we are interested in improving our prediction performance or time of prediction or may be training time. So, we may have different best features depending upon our objective.

The Wrapper Method is really expensive as it takes a lot of time to compute the result for each subset of the features as compare to the Univariate Statistics such as variance. So it's quite computationally expensive but it's also very good as it is directly dealing with the intended results.

Why use microservice in Embedded

How PWM Works in Embedded Systems