Let's have a brief overview of Regularization.

Regularization help us with the problem of overfitting model on the training dataset. Instead of just decreasing the LOSS function we also penalize the model complexity.

There are different form of Regularizatoin.

We will be discussing them in detail in the future blogs.

This L1 regularization can also be use as one of the method of feature selection. 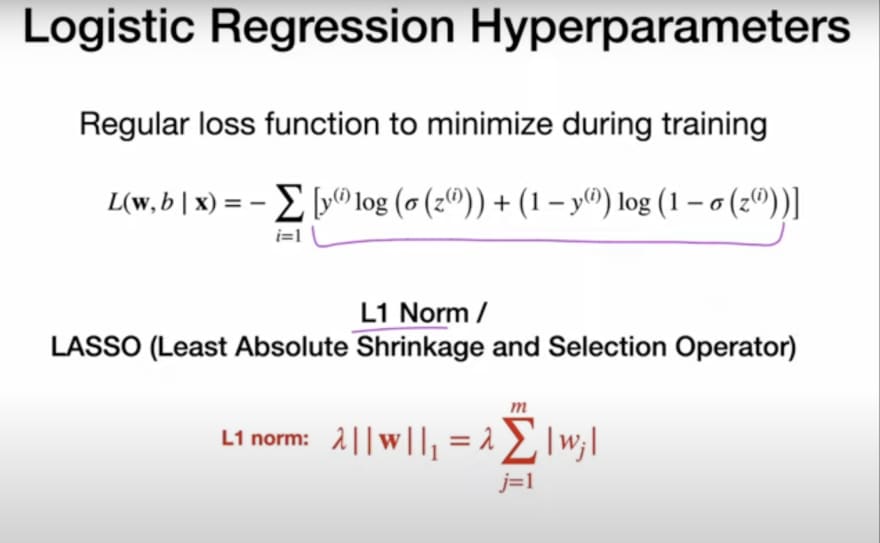 We will discuss the loss function minimising part in some other blog. For this discussion, the interesting part is the N1 Norm it plays the main role in feature selection. This N1 Norm is the measure of how big the weights are. Here, m is the number of features in the dataset whereas |W| is the absolute sum of all the weights. You can think of Lambda as the scaling factor it's a hyper parameter which we have to tune when we use it in practice. This N1 Norm is the penalty against the LOSS function greater the complexity greater will be the penalty and vice versa.

Our final LOSS function is

If we have large Lambda term, the trade of b/w minimizing the solution term and the global loss function lies where one of the weights is zero or usually more than one with is zero.

How can we use it for feature selection?

Most of this info is derived from this video.

In Logistic Regression, we are using all of the feature unless we are using L1 regularization which zero out some of the features. However, in Decision Tree the features selection is done implicitly. It is done such that a feature is selected which reduces the entropy the most. The goal is get the Entropy to 0. There can other criteria for selection of feature such as Gini or any other impurity in General. Also known as Information Gain.

We're open-source! The data-centric sibling of VS Code

Instruction to install pygraphviz package in Pycharm in MacOs