What is Empirical Risk Minimization?

Loss is the penalty for a bad prediction. That is, loss is a number indicating how bad the model's prediction was on a single example. If the model's prediction is perfect, the loss is zero; otherwise, the loss is greater. The goal of training a model is to find a set of weights and biases that have low loss, on average, across all examples. The Loss function is used to compute the Loss. It is also known as COST function.

Mean Square Error is an example of Loss function. It is used in many places in Machine Learning and even in Deep Learning for instance Linear Regression. It is simply the average error across all the examples.

For each example/instance of dataset,

Here, n is the total number of instances, examples in the dataset.

Computing Gradient for a function

If there is a function 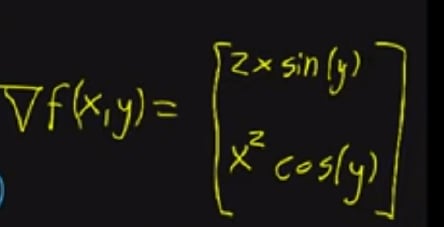 Intuition behind the Gradient

Gradient points in the direction of the steepest ascent( rise).

To have a complete indepth understanding of the Gradient, I compiled the playlist of videos on Gradient from Khan academy have a look at this.

We looked into the Loss function and see how it tells us about how well our model parameters (weights and bais) are doing the prediction.

But by just knowing how bad our Machine Learning Model is doing the prediction isn't really helpful. We want to know some method to change these parameters (weights and baises) in a way that our Loss/Cost function gets reduce and our Machine Learning model do even better. Here, comes the Gradient Descent. 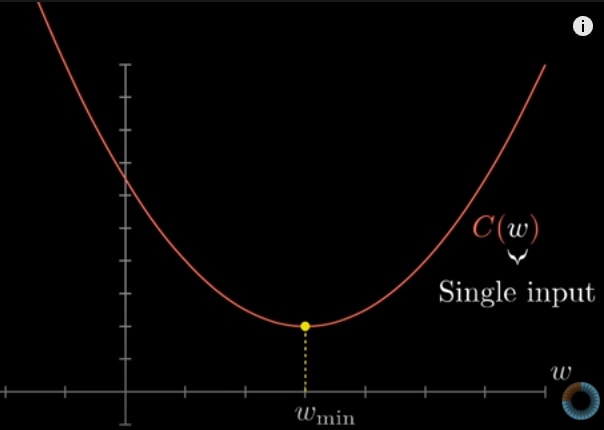 You can check the entire video around this topic over here.

We want to know what value of input to this function gives us the minimum output. One possible solution should be to find the value of W such that the slope of the function C(W) is zero that value of input will be the input value with lowest output. Another way of saying this samething is finding the value of W where derivation of C(W) w.r.t W is ZERO. This works for the CONVEX problem but not for the problem which are not convex like neural network where exist more than one MINIMA. Also, doing it for 1000's of weights make it even worse.

Convex problem is the problem/function which has only one global minimum. For instance function below is convex with only one minima. 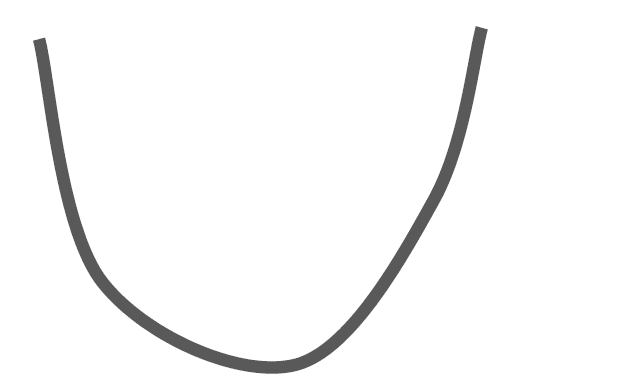 Now, we know what is the problem with above solution. The more feasible solution will be start randomly at any input value and then calculate the value for LOST function. Now, find the derivative at this point which is nothing but the slope of the tangent at that point. If the slope is negative that means our cost function is reducing so we will simply add to current input value and if the slope is positive that means our cost function is increase so we will subtract it from our current input value. In other words, if slope is positive it means our COST function increase however we want to decrease it so will shift to the left and if slope is negative it means our COST function decreasing we want to continue decreasing so we will shift to the right. If we keep on doing this repeatedly checking the new slope and taking the new appropriate step eventually we will approach some local minimum of the function.

In above story, usually the function is the COST function and the parameter are more than one which we need to optimize. This can not be done by taking slope at a single point because we don't want to find the minima w.r.t single parameter but a minima w.r.t all the parameters. The Gradient help us here.

Suppose our Cost Function graph is something like this 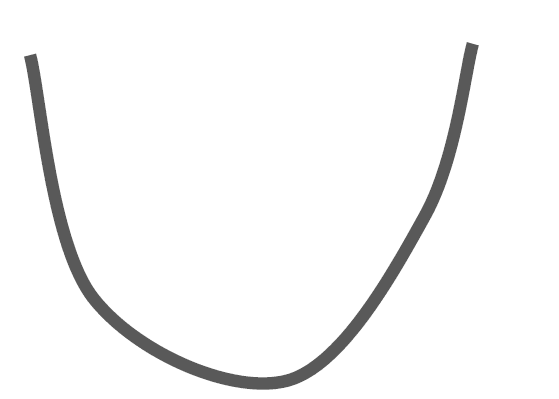 The first stage in gradient descent is to pick a starting value (a starting point) for w1. The starting point doesn't matter much; therefore, many algorithms simply set w1 to 0 or pick a random value. The following figure shows that we've picked a starting point slightly greater than 0:

Note that a gradient is a vector, so it has both of the following characteristics:

To determine the next point along the loss function curve, the gradient descent algorithm adds some fraction of the gradient's magnitude to the starting point as shown in the following figure: 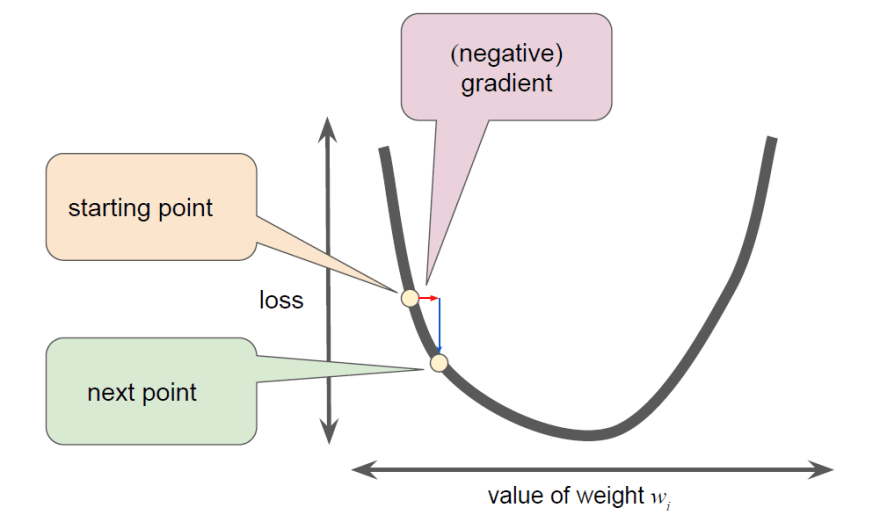 The gradient descent then repeats this process, edging ever closer to the minimum.

When performing gradient descent, we generalize the above process to tune all the model parameters simultaneously. For example, to find the optimal values of both w1 and the bias b, we
calculate the gradients with respect to both w1 and b. Next, we modify the values of w1 and b based on their respective gradients. Then we repeat these steps until we reach minimum loss.

We will use the Gradient to descend to lowest point in the Loss function, thus, this is why this algorithm is called Gradient Descent.

Gradient Descent identifies the optimal value for the paramters by taking big steps when far away and baby steps when it is close to the Minima.

But how is it happening. Thing is size of the step should be related to Slope, since it tell us we need to take a baby step or big step, but we need to make sure that big is not too big. Bypassing the MINIMA and even increasing the loss function. So, Gradient Descent determine the Step Size by mulitplying the Slope by a small number called The Learning Rate.

For example, if the gradient magnitude (slope) is 2.5 and the learning rate is 0.01, then the gradient descent algorithm will pick the next point 0.025 away from the previous point.

Most machine learning programmers spend a fair amount of time tuning the learning rate. If you pick a learning rate that is too small, learning will take too long: 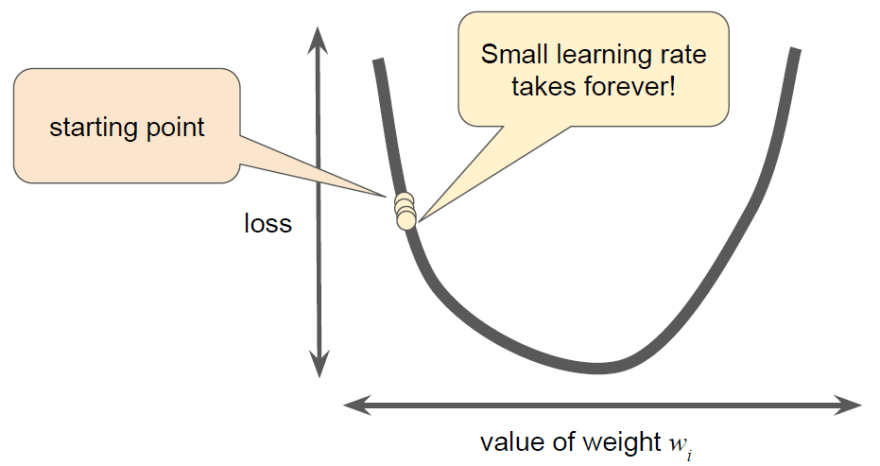 Conversely, if you specify a learning rate that is too large, the next point will perpetually bounce haphazardly across the bottom of the well and you may bypass the MINIMA and increase the loss value:

In practice, finding a "perfect" (or near-perfect) learning rate is not essential for successful model training. The goal is to find a learning rate large enough that gradient descent converges efficiently, but not so large that it never converges.

It's the learning rate, where gradient descent reaches the minimum loss/point in the the fewest number of steps.

What is meant by our model is converged?

If our loss stops changing or at least changes extremely slowly even after continuous iteration. When that happens, we say that the model has converged.

Why are we always subtracting the Step Size when updating the parameter?

We know that Gradient points in the direction of the steepest ascent (rise) and Step Size is using the Slope from the Gradient Vector in it's computation. By default Step Size (Gradient) will move towards the maximum but we want to go towards the MINIMA that's why we subtract it.

What if in case we want to reach the maximum?
You gussed it right. We will simply add it instead of subtracting it.

This is a good video explaining the Gradient Descent algorithm step by step.

We can also say that the stopping criteria for Gradient Descent is simply. When our model get converged.

Other variations of the Gradient Descent

Why there are other variants of Gradient Descent?

The default Gradient Descent doesn't work really well for large dataset it's efficiency really sucks. When we computing the gradient of the loss function Math's suggest that we should compute the gradient over all examples in our dataset. This is the only way to guarantee that our gradient steps are in the right direction. But for a large dataset with million or billion examples that would be a lot of computation in order to perform each step. As the Loss function will be really large and calculating it's derivative will result in large computation time.

Empirically, rather than using the entire dataset we can compute
the gradient of the loss function over the single randomly selected example over the dataset that mostly works too. Even though they have to take more steps but the amount of computation require to reach solution is often much smaller. This is known as Stochastic Gradient Descent. This significantly reduces the time spent calculating the derivative of the loss function.

In practice, we adopt an intermediate solution rather than use one example or entire dataset we use a small batch of randomly selected examples/instances somewhere between 10 and 1000 examples to perform our steps. This is called Mini Batch Gradient Descent.

In next blog, We will do the Python implementation of Gradient Descent for Linear regression.

See you there.
David Out