Before getting start with actual coding. Let's setup our environment.

As mentioned in the previous blog, after downloading our dataset. We will extract the downloaded zip file GeneratedLabelledFlows.zip. Once, we get all the files they will be upload to google drive in my case /content/gdrive/My Drive/project/dataset/original. Once, its done we will create a new notebook and connect it with google drive.

This may require permission for your google drive.

Hurray! Now, we are successfully connected with google drive which means we can easily create, edit or delete files using Google Colab as we would do in our PC using Jupyter Notebook.

Getting an idea of data

We will use pandas to create Data Frame in order to get an idea of how our data looks like. You can choose any file. I'm going with Friday-WorkingHours-Afternoon-DDos.pcap_ISCX.csv.

We can see that we have a total of 85 fields/columns in our dataset.

Combining all dataset files into one Pandas Data Frame

In order to merge all files into one data frame. We need to make sure all the files have same columns. Remember! All columns not number of columns.

We will create a list of dataframe. Each entry in the list correspond to the dataframe for the respective CSV file in the dataset.

Now, that we have a list of dataframes. We will check either all the dataframes have same columns or not.

If all the files have same columns then we will proceed which will be the case here. Otherwise, we will be performing further processing. Finally, we will merge all the dfs in one single Data Frame.

We will use merge_df.info to find the number of rows, columns and datatype of each field in the data frame. 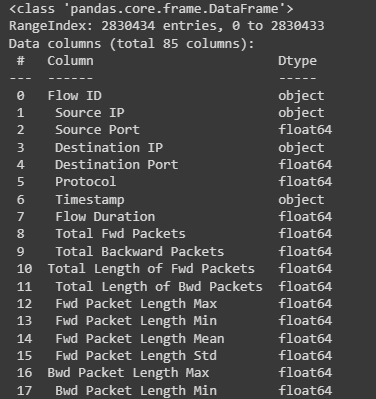 Here, object indicates this a datatype other than integer for instance boolean or string etc. However, to find the exact type access to the exact value is required then you can use the Python type operator.

The pandas.describe function is used to get a descriptive statistics summary of a given dataframe.

Desriptive Statistics involves describing, summarizing and organizing the data so that it can be easily understood.

The main goal is not to print this descriptive statistics but interpreting/understand it. So, we can utilize that in our further processing of data.

What if we observe a relatively high value for 25% or 75% percentile?

This could be the possible interpretation of having exterme outlier in the last or first quarter of the dataset respectively.

How mean and standard deviation help us understanding the data?

Even after all this talk these number still are quite daunting! Right?

Don't worry we will make them talk in the next blog.
David Out.