Now, what would you do if you have to print Hello World! a thousand times or a million times. Writing a million lines of code can be a solution but surely not an intelligent one. Not just the print statements, think of any set of instructions or tasks which you want to do repetitively. In cases like these, you can use loops. Loops are a utility to perform a task or set of tasks repetitively.

There are three types of loops we'll be looking into

Let's understand this by our previous example. Let's prin numbers from 1-5.

By writing int num=1 we declare and initialize a variable num to value 1. Instead of declaring the variable inside the loop, we can also declare it before the loop and then just use it

In the second part, we write a condition that our loop will check on every iteration. num<=5 is the condition we wrote for our problem statement because we want to print the numbers from 1-5. There can be some different ways of writing conditions. The same condition num<=5 can also be written as num<6. That makes sense right? Let the num be less than or equal to 5 or let it be less than 6 both are just different ways to accomplish the same result in the end.

You can also use a variable to specify conditions. For example, if you want to print numbers from 1-n where n is an integer entered by the user, you can do something like 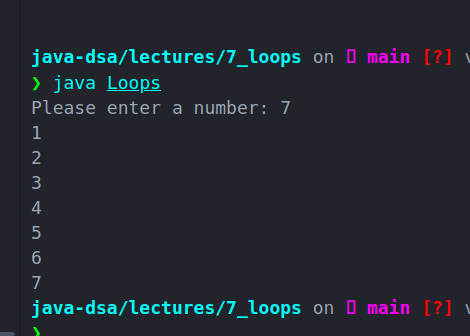 Increment or decrement of the iteration variable (num) as per the need. In our case we want the variable to increase from 1 up to 5.

There are several ways you can increment/decrement the iteration variable.

And same for decrement

Let's try and implement our previous example, but this time with using while loop

You can use both of the loops interchangeably as you prefer. The reason that they both exist is

Use the while loop if you do not know how many times the loop is gonna run.

For example, if you are given a problem to run the loop until the user inputs the letter x. It's not possible to achieve this using for-loop but you can do this using while loop as follows

So now the loop will continue until the user inputs letter x. 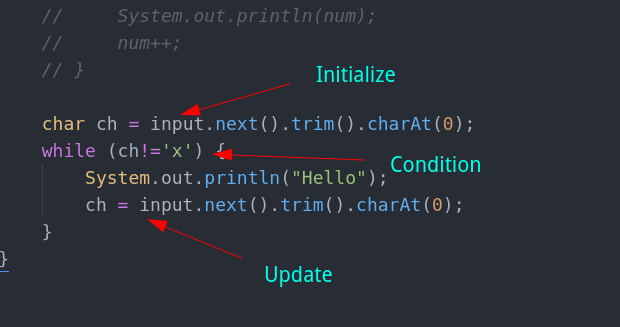 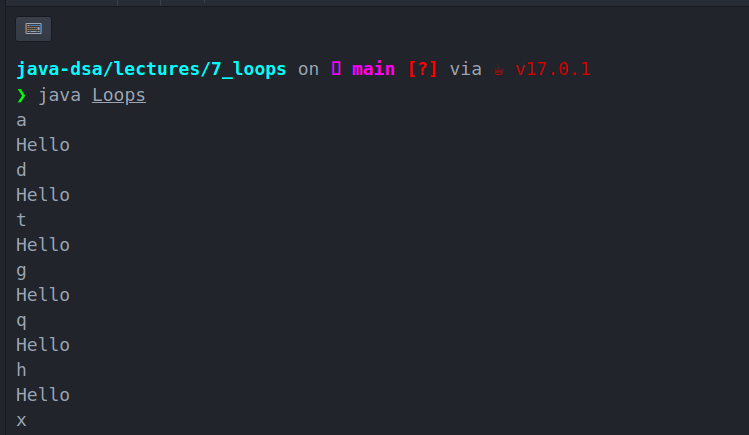 Loosely translated, a do-while loop can be read as

do something (body), while the condition is true.

Again, one might ask himself, when do we use a while loop and when to use a do-while loop? What's the difference between the two of them?

If you observe, you might notice the difference between the two loops.

In the case of while loops, the condition is checked first, and then the body is executed.

In case of do-while loops body is executed and then the condition is checked.

Look at the following example

Here the iteration variable is already violating the condition, so the while loop will not run at all. 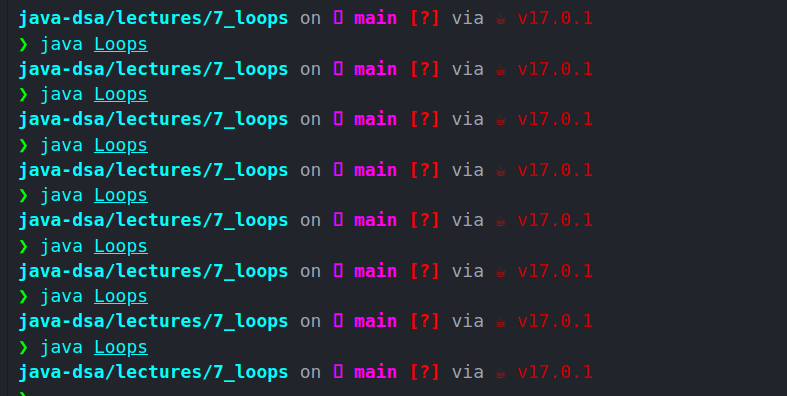 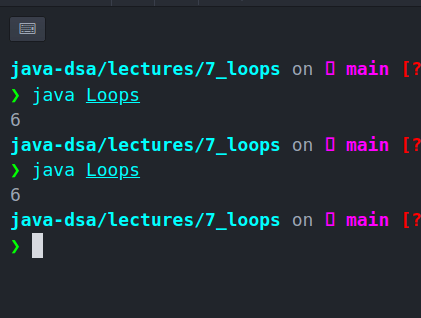 As we can see, though the condition is already violated, the loop still runs one time, it executes the body, and then after checking the condition it gets terminated.

So in cases where you want your loop to run at least once, you can choose do-while over while loop.

That's all about loops. Kunal has discussed some really important examples regarding Fibonacci numbers, Digit counts, Number reversal which is wholly based on the concepts that we have learned in this article. Do check out his video.

Also, consider checking my repo for the code of those examples.

Feel free to connect via socials