Let's look at all the primitive data types supported by Java.

Note:- All the statements in Java language are ended by a colon ( ; ) symbol stating that the current statement ends and a new statement begins from that point onwards.

Also notice that the syntax to declare variables is as given in the above example.

literal: These are the syntactical representation of our data. In very simple language these are the actual values of our variables

Now one might wonder if we have int, what's the need of long datatype. The same goes with float and double; this has to do with the size of a datatype. An integer takes 4 bytes of memory so anything bigger than that has to be stored in a long type data and the same is for float.

Do not worry much about these things now. We will study everything about size when we'll be discussing bitwise operators.

Below is a basic program demonstrating inputs we discussed so far.

If you try to enter an integer or float in a string-type variable you will get an error and the program will fail. The same is true when you enter a float to an int-type variable. On the other hand, if you provide an integer to float-type data, the integer automatically gets converted to float. 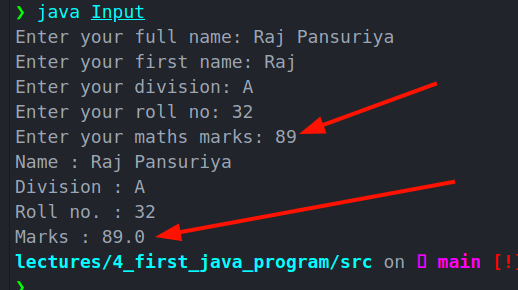 As you can see, in the above picture though the input given is 89 it gets converted to 89.0. Why does this happen? And why the reverse is not possible? Why do we get an error when given a float to an int type variable?

All of this can be understood by learning about type conversion and casting.

In some situations, we might want to convert all our data into a particular datatype which we can do explicitly. This is known as Type-casting.

For example, if we want all our data in int type by default and we want our program to tackle the condition where a user might input a float number. then we can convert the input number into integer explicitly using the following instruction

Now even if the user inputs a float number it will be accepted without any error because we have used the nextFloat() method instead of nextInt(). It will then be converted to integer type as our code demands.

This was all about Typecasting and data types. Have a look at the git repo below to start with some basic programs and try to understand and run them.

Change the program and play with them. You can always connect with me in case you have any doubts