This Travel Article App UI clone tutorial series was inspired by the React Native Universal Listings App Template that accommodates a wide variety of use cases, powered by universal features and design. This app template allows us to implement our own apps to list anything that belongs in categories and can be added on a map. Some of the examples of apps that we can build using this template are real estate properties, restaurants, bars, cars, dealerships, e-commerce products, marketplace used products, hotels, travel locations, etc.

In this first part of this tutorial series, we are going to set up the starter template for the upcoming tutorial parts. This first part will form the base for the overall tutorial by sectioning out different parts of the UI. Here, the idea is to start with a new React Native starter project using expo. After that, we will establish a basic project directory structure for the overall project including navigator configuration. Lastly, we will section out different UI elements in the app for upcoming parts of this tutorial series.

Now, we need to create a boilerplate react native application using expo. In order to do this, we need to run following command in the desired project directory:

After running the above command, we will be asked to choose the template for the boilerplate app. Here, we are going to choose the *blank * template. The blank template provides a very minimal app template as clean as an empty canvas. The selection screenshot is provided below:

As we can see, we choose the blank template and hit enter. Then, we need to enter the project name and after that, the boilerplate react native app is configured into our directory.

Now, we need to enter the project directory and then run the command:

Then, we will get the following boilerplate app in our emulator screen: 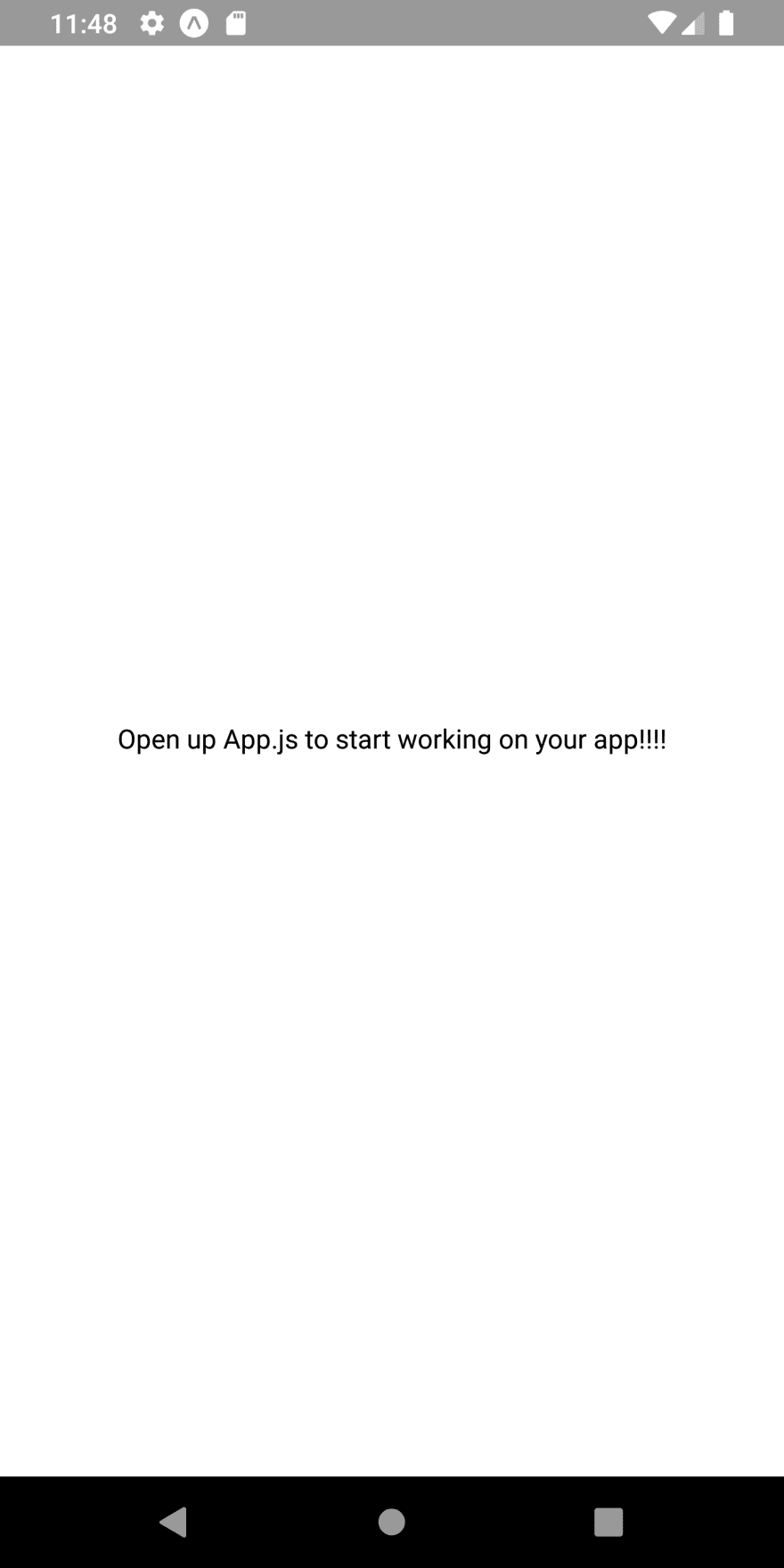 As we can see, we have got the starter template running in the emulator. The screen is not configured with too many styles and layout designs. Just a simple white screen with text in the middle. 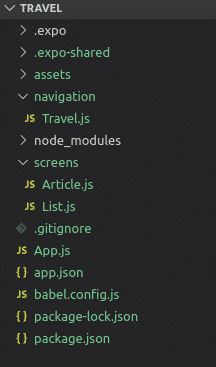 Here, we are going to set up our navigation configurations so that we will be able to navigate from screen to screen in our app. For that, we need to install the react-navigation package along with its supporting dependent packages as shown in the code snippet below:

Now, that we have installed the required packages, we can now set up our navigator in the Travel.js file. In Travel.js file, we will set up a stack navigator with List and Article screen as shown in the code snippet below:

Now, in the App.js file, we need to create an app container to hold this stack navigator. For that, we need to import our Travel.js file in App.js file and configure it as shown in the code snippet below:

Here in the App.js file, apart from the code in the above code snippet, we can remove all other unnecessary codes. Here, we have imported the createAppContainer function from the react-navigation package. We have also imported the Travel.js file as Travel which contains for navigator configuration. Then, we have passed the Travel navigator into the createAppContainer function as a parameter that is being exported.

From here on, our default initial screen will be the List screen as configured in the Travel navigator. But we have not set any template to our List.js and Article.js screens. So, let us set a default simple template for both the screens.

Setting up simple Templates for Screens

Here, we are just going to set a simple React Native template for our List and Article screen in the List.js and Article.js file. In the List.js screen, we can use the code from the following code snippet:

Now, in the Article.js screen, we can use the code from the following code snippet:

Here, we have just set up a simple template importing the necessary modules from react and react-native packages. Then, the templates only return a simple Text component.

Now, if we run the app in the emulator, we will get the following result in our emulator screen: 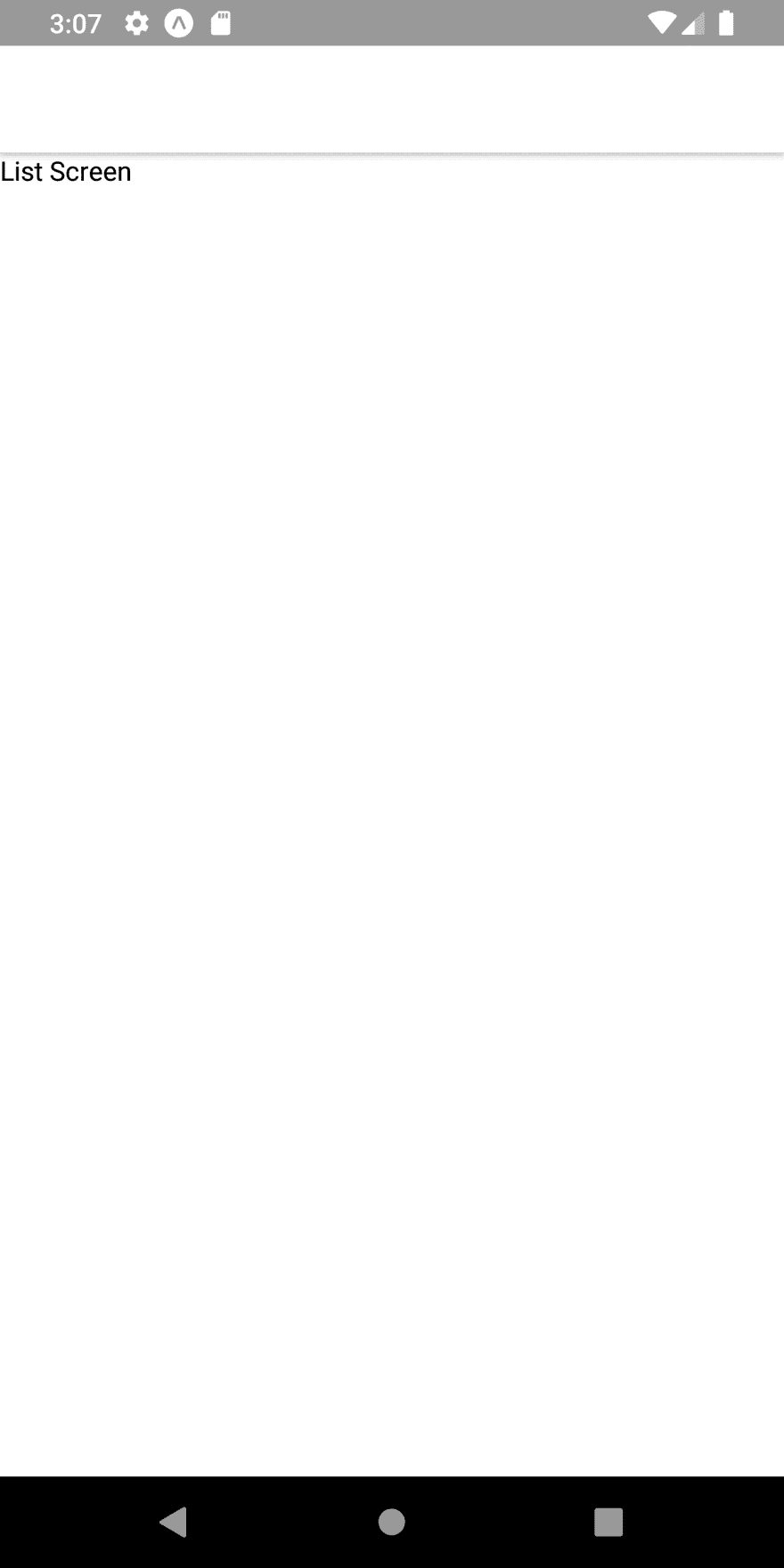 First, we will set up a header section by using the navigationOptions object provided by our navigator. The navigationOptions object is provided by default when we configure our app screens to any navigator. This object allows us to configure the headers as well as other elements as per the specific navigator that we use. Now, in our to section out the header section, we need to use the code from the following code snippet:

Hence, we will get the following result in our emulator screen: 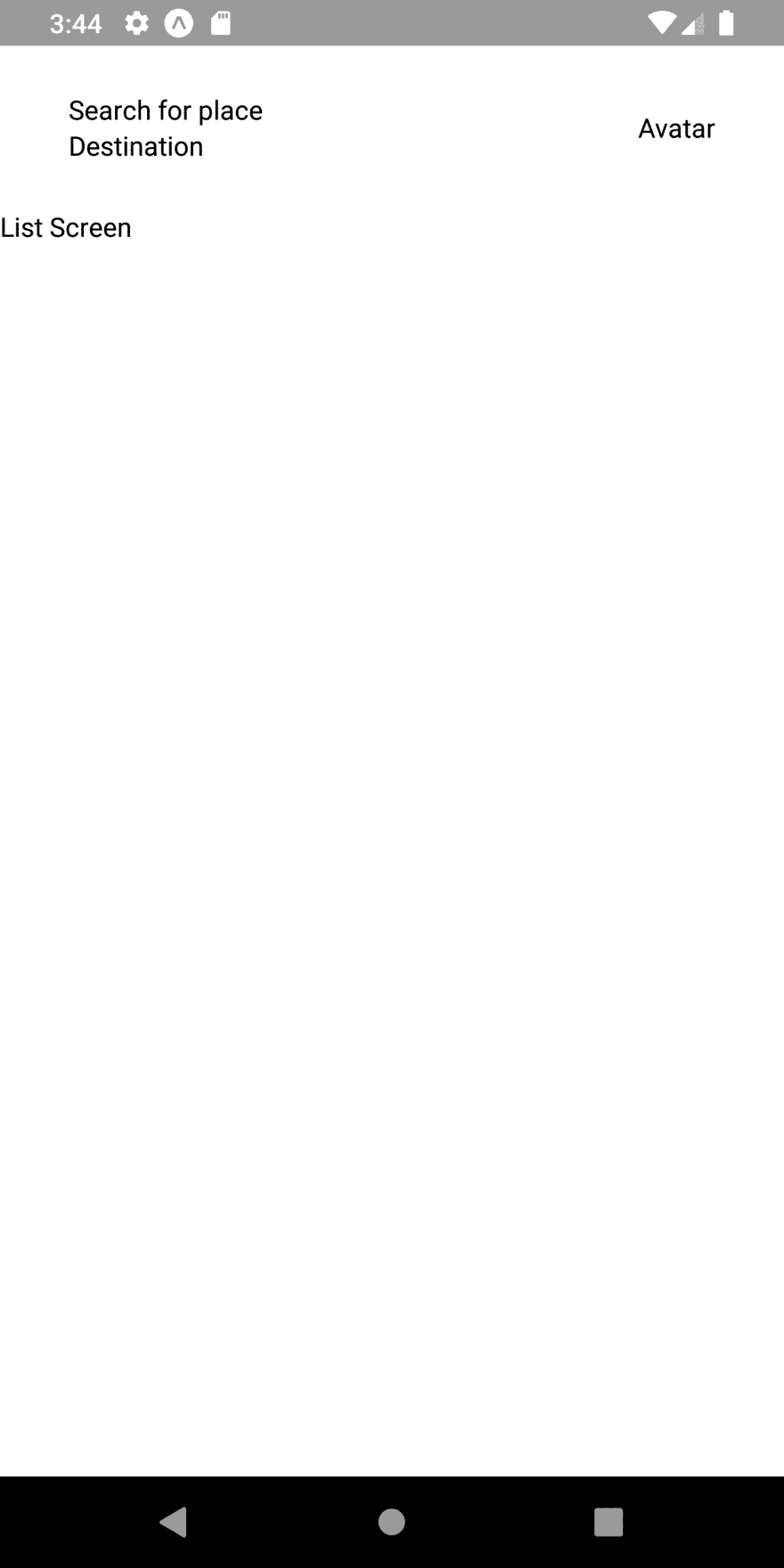 As a result, we have got the header section on our List screen. We will make it as in the actual app in the upcoming tutorial parts.

Note that if we get the error after performing this step then we may need to place the StyleSheet component before the class configuration.

Now, we need to call this function in our render() function as shown in the code snippet below:

The required styles are provided in the code snippet below:

Hence, we will get the following result in our emulator screen: 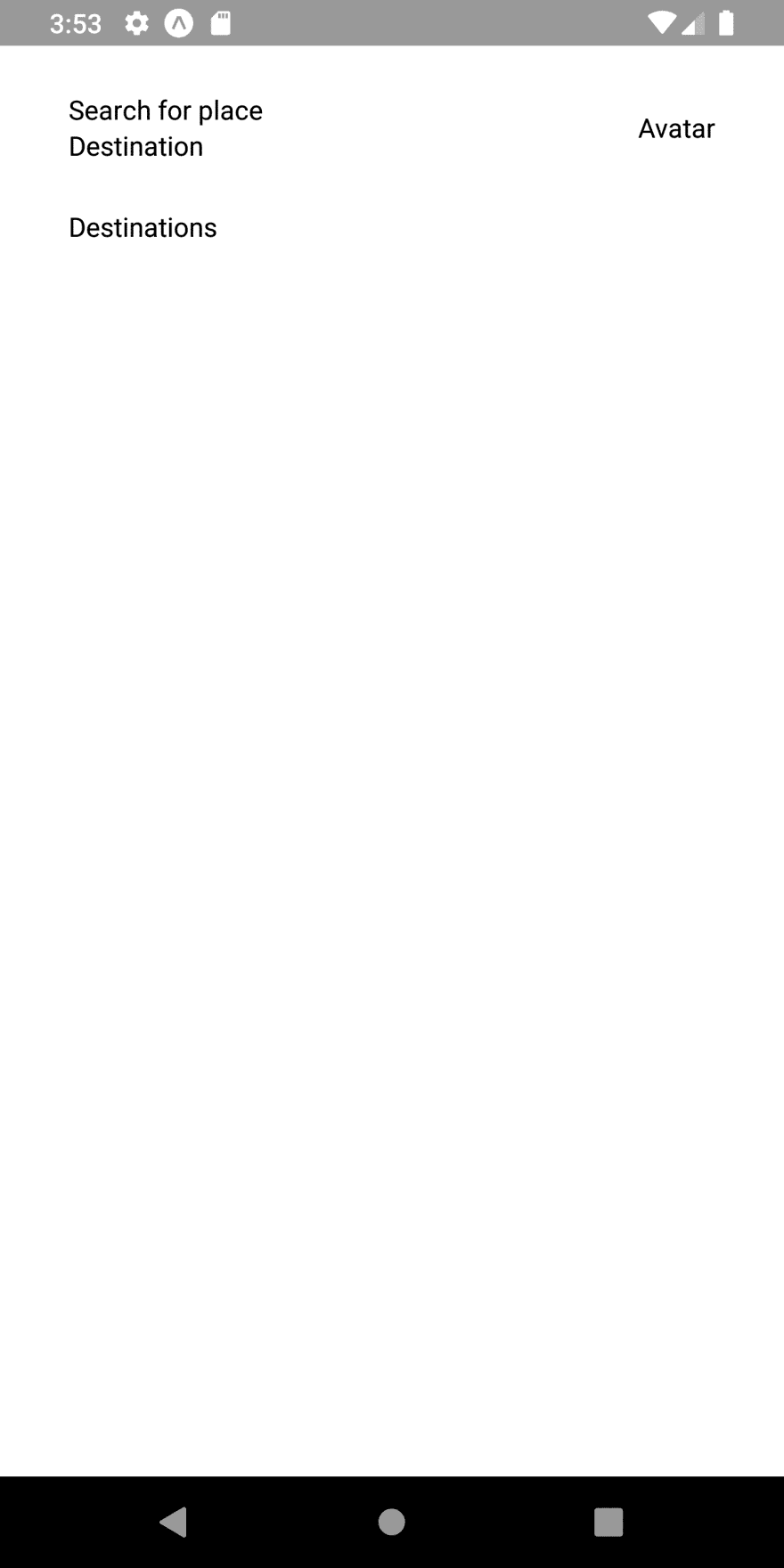 As we can see, we have got the recommendation section which we will implement in the upcoming tutorial parts.

Here, we are going to do the same as in the Destinations section. Thus, we are going to create a function called renderRecommended() . This function will return the template for the Recommended Section in our List screen. For now, we just going to return a simple View and Text components from this function as shown in the code snippet below:

Now, we need to call this function to our render() function as well:

Hence, we will get the following screen in our emulator screen: 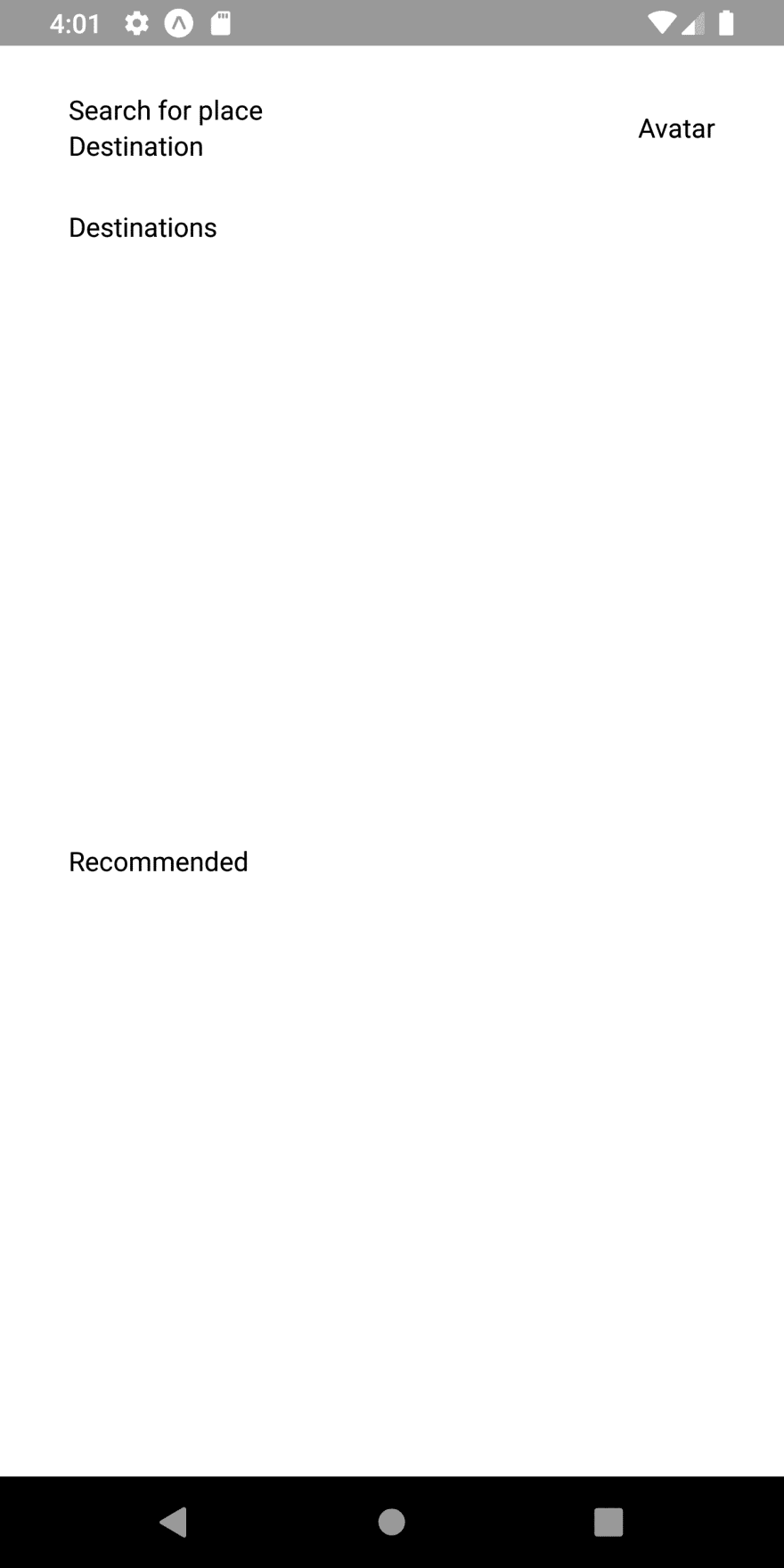 As we can see, we have separated out the Recommended section as well.

Now, these three sections will form a foundation for the List screen in our upcoming tutorial parts. Finally, we have successfully set up the starter template and sectioned out the UI parts in the List screen.

This is the first part of our tutorial series to clone the React Native Travel Article app UI. In this part of the tutorial, we first learned how to set up a stater react native app project by using expo. Then, we learned how to configure the screens directory in order to prepare for the app UI. After that, we got step by step guide on how to set up the navigator for our app screens. Lastly, we separated the List screen UI sections by defining functions that return the template of the particular section.

Well, this tutorial just paves the foundation for upcoming tutorials. In the next part, we are going to implement a portion of the Destinations section with Swiping/Scrolling transition.

Keep in mind that we may receive commissions when you click our links and make purchases.

Do you still use "position" to center align vertically and horizontally?