This series intends to show how I build app to serve content from my WordPress blog by using react native. Since, my blog is talking about react-native, the series and the articles are interconnected. We will learn how to set-up many packages that make our lives comfortable and learn how to deal with WordPress APIs. Here, the most prominent features talked about in the book are the dark theme , offline mode, infinite scroll and many more. You can discover much more in this series.this inspiration to do this tutorial series came from the React Native Mobile Templates

First, we are going to implement pull to refresh. For that, we need to define a state variable called isFetching which will handle the hiding and showing of refresh loader. The isFetching state is defined as shown in the code snippet below:

Next, we need to create a function called onRefresh() which will trigger when
we pull the pull to refresh trigger.

Here, we have changed the state of isFetching to true and also called the
fetchLastestPost function again. This will cause the re-fetch of the posts by
making an API call to the server.

And, in the fetchLastestPost function, we also need to change the state of
isFetching to false to hide the scroll loader. 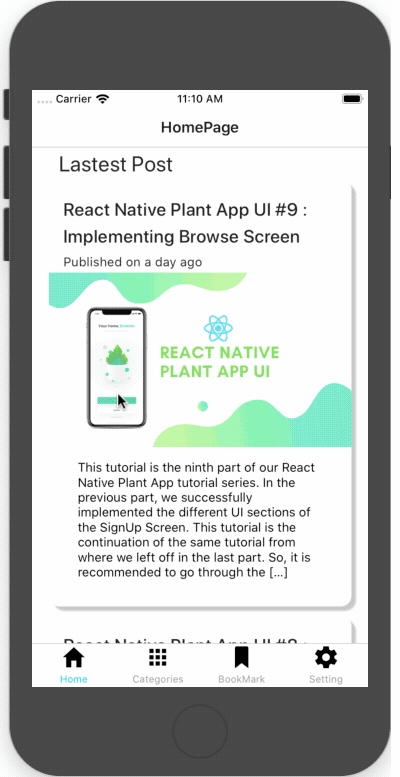 As we can see, when we pull the list downward the spinner appears and the list
is refreshed.

Then, we are going to create a new function called handleLoadMore and call it
in the onEndReached event of the FlatList. We are also configuring some
addition props to the FlatList such as onEndReachedThreshold which controls
the trigger of function based on how far we are from the bottom of the list. The
overall implementation is provided in the code snippet below:

Now, the implementation of the handleLoadMore function is provided in the code
snippet below:

Here, we have made increment to the page state variable and then called the
fetchLastestPost()function again.

Now, we need to make some configuration in the fetching of API as well which
will be based on the page number as shown in the code snippet below:

Now, in order to add the Infinite scroll, we need to make use of
ActivityIndicator component from the react-native package. First, we need to
import it as shown in the code snippet below:

Then, we need to implement a new function called renderFooter() which will
return the template for ActivityIndicator wrapped by View component with
styles or nothing based on the isFetching state as shown in the code snippet
below:

Here, if the request is not sent then, we hide the spinner. Hence, we will get the following result in the emulator screen: 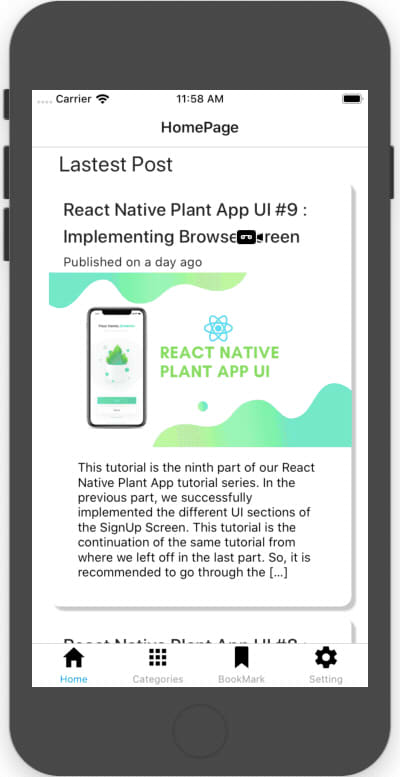 As we can see, the spinner appears and loads the addition article cards to the list.

Hence, we have successfully completed the implementation of the Home screen list. Now, we are going to create the template for the Single Post.

Flutter vs. React Native vs. Xamarin