This series intends to show how I build app to serve content from my WordPress blog by using react native. Since, my blog is talking about react-native, the series and the articles are interconnected. We will learn how to set-up many packages that make our lives comfortable and learn how to deal with WordPress APIs. Here, the most prominent features talked about in the book are the dark theme , offline mode, infinite scroll and many more. You can discover much more in this series.this inspiration to do this tutorial series came from the React Native Mobile Templates

Now, we are going to include the navigator component back to App.js. For
that, we need to import the Navigator.js file into the App.js file as
Navigator and use it in the render() function as shown in the code snippet
below:

Here, we are going to activate the dark mode in the** react-navigation**. The
react-navigation package provides us with a prop called theme through which we
can easily change into dark mode. For that, we need to use the theme prop in the
Navigation component that we are exporting from the Navigator.js file as shown
in the code snippet below:

Here, we integrated the theme prop to the component we are exporting from
Navigator.js file with theme as dark.

Hence, we will get the dark mode in the app interface as shown in the emulator
screenshots below on the next page: 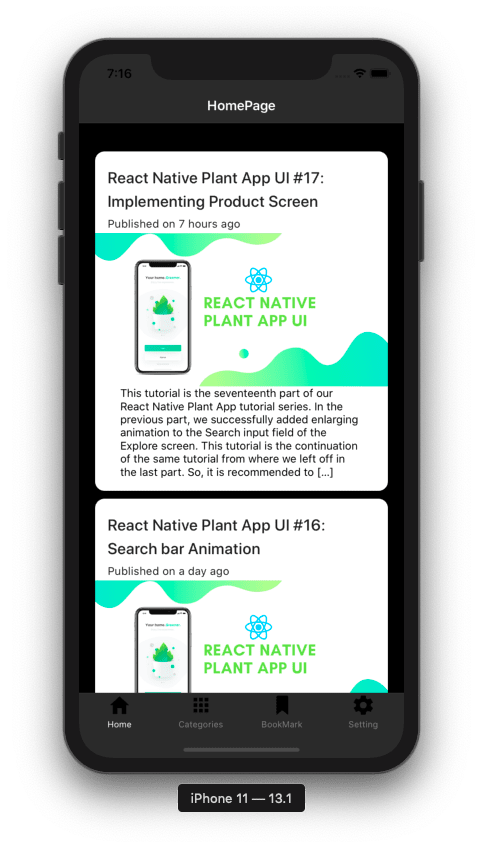 As we can see, we have activated the dark mode in the app interface but the
cards displaying the article posts are still in white theme. For that, we need
to configure the react-native-paper components as well.

Here, Provider component is the main Context class that makes the global config
of dark mode. The DarkTheme and DefaultTheme are set of configurations. Now, we
need to wrap the Navigation component that we are exporting from the
Navigator.js with the PaperProvider component. And then, integrate it with
the theme prop set to DarkTheme component as shown in the code snippet below:

Hence, we will get the following result in our emulator screens on the next page: 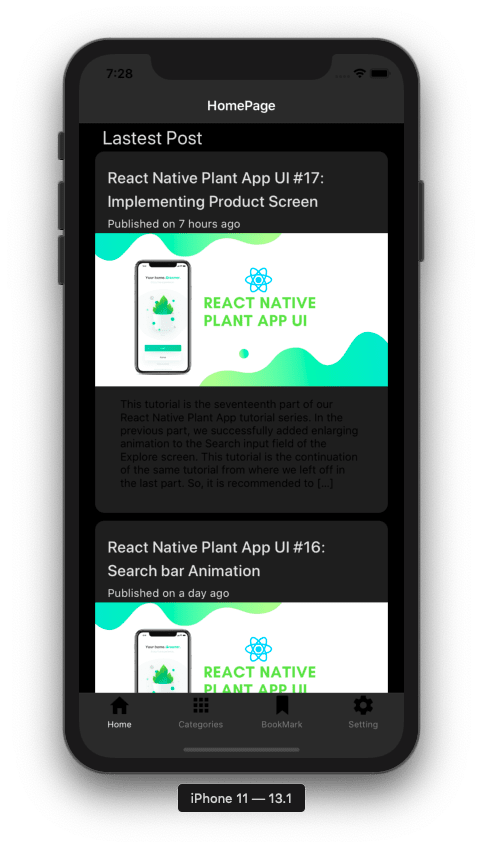 As we can see, we now have the dark mode activated in the article post cards as well. But, we can also see that there is some issue with the excerpt of the article that is being displayed in the cards. All the letters in the excerpt are in black color style. This is because we used the component from react-native-render-html package.

How to pass initial props from Android native.

Connecting a Meteor back-end to a React Native application