The builder is a creational pattern that can be used to construct “more complex” objects, without having to directly new them up in calling code.

Though the builder pattern is not my most used creational pattern (that’s the Factory), it is one that I often rely on for the creation of more complex objects than what the factory easily allows for.

The builder pattern is a design pattern designed to provide a flexible solution to various object creation problems in object-oriented programming. The intent of the Builder design pattern is to separate the construction of a complex object from its representation. It is one of the Gang of Four design patterns.

I can’t think of an exceedingly straight forward example that truly shows of the power of the builder, but I am going to throw something together as a demonstration. Also note that a lot of the .net core app bootstrapping works around the concept of a builder, IHostBuilder comes immediately to mind.

The above shows a bit of what the pattern can accomplish, but keep in mind this is going to be nothing like what the IHostBuilder will give you access to from the framework.

Let’s break down one of the similar methods exposed by the interface: IAddressBuilder WithAddress1(string value);. This method takes in a string value and returns an IAddressBuilder. What does that mean exactly? That means it exposes a fluent api!

Wait, what’s a fluent api? Fluent APIs allow for “method chaining”, which can look like this:

Because each “non build” method within IAddressBuilder returns an IAddressBuilder that allows for the “chaining” of method calls on the builder as seen above, finally culminating in the built IAddress when .Build() is called.

The above should be pretty straightforward looking, the only thing to me that seems “weird” if you haven’t seen it before is the return this; within all the With[x] implementations. The return this; accomplishes the method chaining discussed earlier in that “the instance (this) is returned from the method, and can immediately be invoked again”.

Here’s an example of it running: 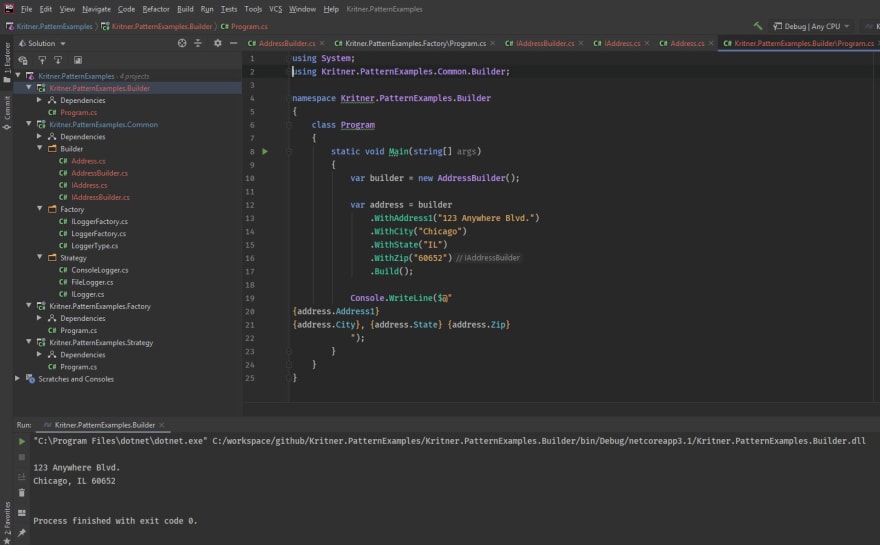 Reasons to use this pattern

It may not be immediately obvious why you would want to use this pattern, so hopefully this section will help shed some light!

Once suspended, kritner will not be able to comment or publish posts until their suspension is removed.

Once unsuspended, kritner will be able to comment and publish posts again.

Once unpublished, all posts by kritner will become hidden and only accessible to themselves.

If kritner is not suspended, they can still re-publish their posts from their dashboard.