The decorator pattern is a structural design pattern that can be used to add functionality to classes without modifying the original class or its interface.

I’m not sure if that made sense, so hopefully an example will help clear things up.

For our abstraction, we’re going to create a service that retrieves the weather for us:

In the above, we have an interface IWeatherGettinator that has a single method, which takes no arguments, and returns the weather; simple enough.

For this example, we’re going to pretend that to get the weather is an expensive operation, just because it makes one of the decorators of IWeatherGettinator more interesting and easier to see the point of it all (IMO).

So for the implementation of the IWeatherGettinator:

On getting the weather (which is a ~5 second operation), we get a random temperature and a value that indicates if it’s going to rain or not. Each time GetWeather is invoked, it takes another 5 seconds to retrieve a random “weather” instance.

The above implementation should look something like this when you ToString the retrieved Weather via a GetWeather invoke: 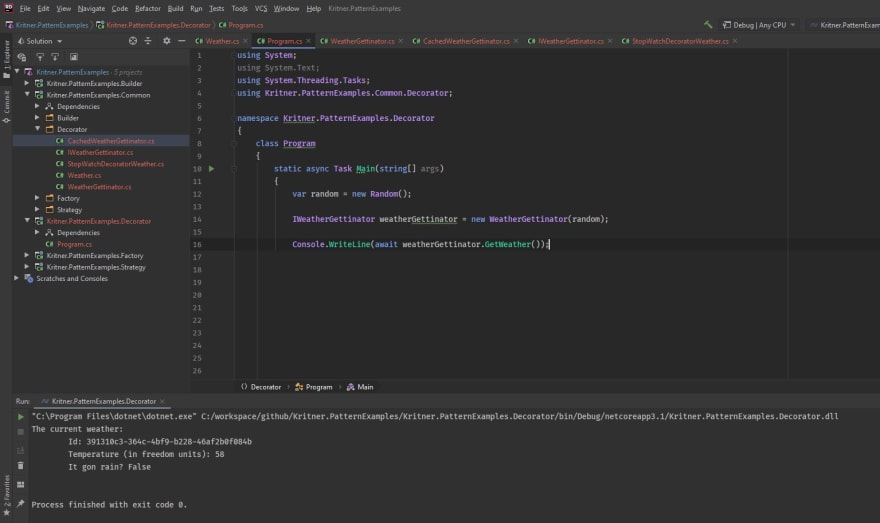 Getting the weather seems to take a pretty long time! Perhaps we can introduce our first decorator to get some timing information on the implementation of IWeatherGettinator:

Now you probably wouldn’t actually write a decorator exactly like the above, but you could do something like it, especially if you were to make use of a logging framework. Logging the above could make more sense, especially if the invoke took more than a certain amount of time.

How does the above get used? Well, you could “compose” your object like so:

You would actually want to be constructing these objects via an IOC container or something similar, this was to just get the point across… also there is some complexity to registering decorated objects with at least the .net core built in IOC container; though you could also use a factory to accomplish it more easily.

What does the above construction mean? Well, we’re instantiating a new instance of a StopWatchDecoratorWeather which itself depends on a IWeatherGettinator instance, in this case we’re passing in a concrete implementation of WeatherGettinator.

Running the IWeatherGettinator while making use of the StopWatchDecoratorWeather would look like this: 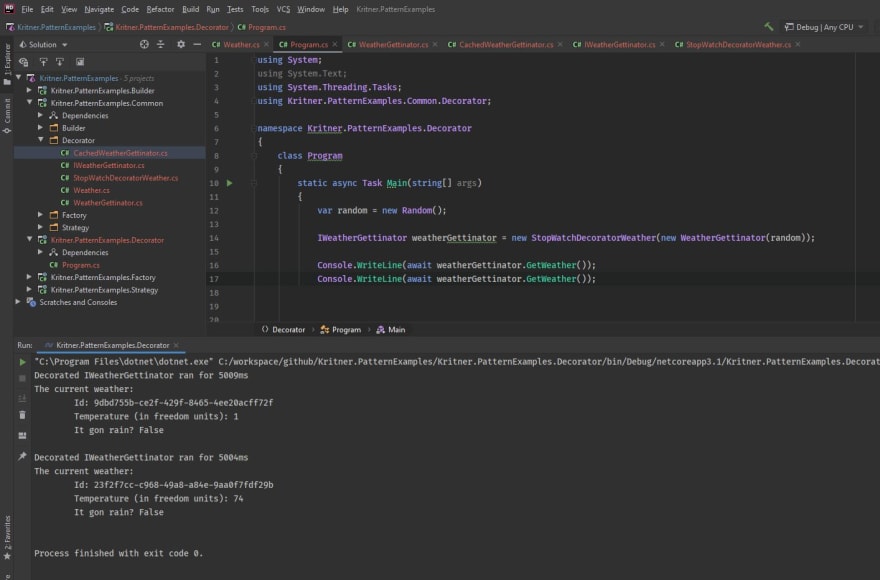 The issue with inheritance

Inheritance has an issue; an issue that can be solved through composition. I’ve mentioned this several times now, but it’s kind of hard (at least for me) to convey what I mean.

Say we wanted to introduce another piece of functionality; in this post we’re going to be doing it through the use of decorators, but just imagine for a moment that we weren’t.

In c# a class can only ever extend a single other class. If we ever wanted to “mix and match” behaviors of an abstraction that relied on inheritance, that can be extremely difficult to do. If we have an interface IFoo, with an implementation Foo, then had separate implementations A and B, both of which extended Foo, how would we go about introducing yet another implementation C, that needed some of its own unique characteristics, as well as the additional functionality provided by both A and B? This would be challenging with an inheritance scenario, but is really trivial when making use of decorators.

To demonstrate that, let’s introduce another decorator to our IWeatherGettinator.

We’ve done some testing with our StopWatchDecoratorWeather and determined that we could save a lot of time getting the weather if we introduced some caching. Thankfully, introducing caching via a decorator is very simple, and should look pretty similar to our first decorator!

In our new CachedWeatherGettinator, we’re making use of some instance state to return the previously retrieved weather if it’s less than 30 seconds since it was retrieved. You’ll notice this implementation, like our first decorator, both implements and depends on IWeatherGettinator.

We can now try out our new decorator like this:

And you’ll see that the “first” call to the IWeatherGettinator will take the 5 seconds, but another call made immediately after will return much faster.

But even more interesting that that, is we can make use of multiple decorators for the same abstraction, the construction of which is considered composition.

We’re “composing” our object by decorating our base WeatherGettinator with multiple decorators! We have decorated the base object with both a StopWatch as well as Caching layer, mostly to demonstrate that the caching layer is in fact working. Let’s take a look! 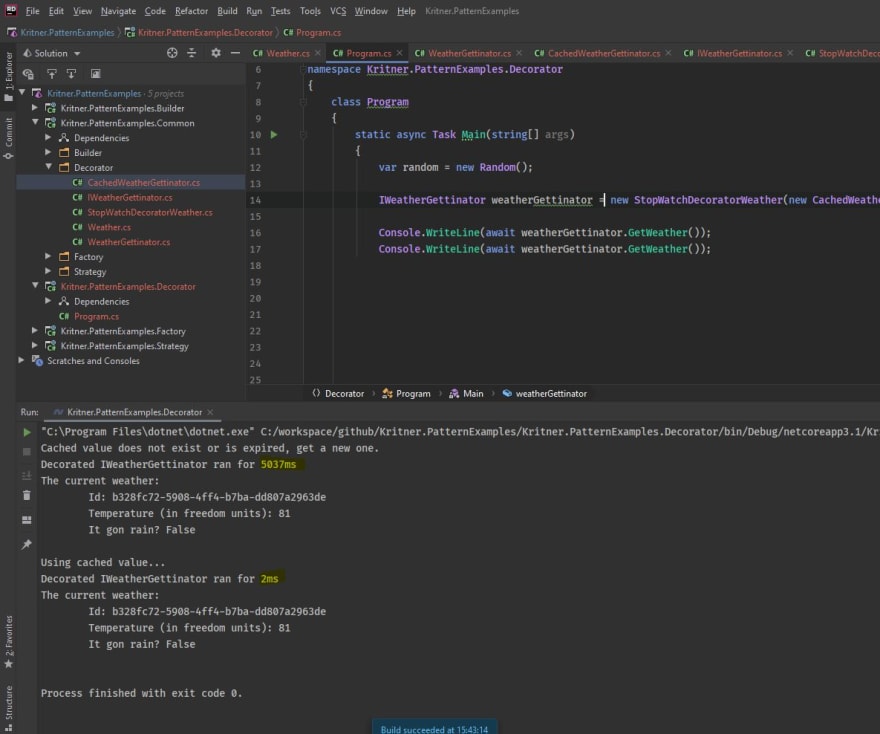 Reasons to use this pattern

Hopefully it should be pretty clear after going through the post why this pattern can be quite powerful, but just to reiterate:

C#: Understand about IEnumerable vs. IQueryable vs. ICollection vs. IList

Anatomy of a Go Program

ASP.NET Core MVC - What is IActionResult?

Once suspended, kritner will not be able to comment or publish posts until their suspension is removed.

Once unsuspended, kritner will be able to comment and publish posts again.

Once unpublished, all posts by kritner will become hidden and only accessible to themselves.

If kritner is not suspended, they can still re-publish their posts from their dashboard.