This is the #2 post of the IoT series that I am writing, in this article I will talk about IoT basics and how it works.

The internet of things, or IoT, is a system of interrelated computing devices, mechanical and digital machines, objects, animals or people that have the ability to transfer data over a network without requiring human-to-human or human-to-computer interaction. When we talk about smart devices, automation, communication between two different devices through the network, this is just possible because of IoT.

Industries, companies in the logistics and security sectors are adopting IoT to become faster, more efficient, improve the decision-making process and also expand the reach of their services. With IoT, these companies can operate in distant areas, which would have been unfeasible until then. Drones, robots and automatic machines are examples of smart devices connected through an IoT system, that has a network behind.

An IoT environment is loosely based on sensors/devices, brokers and client applications. The devices generally are microcontrollers with chips and sensors, these microcontrollers detect variations through its sensors and send it to the connected brokers. Brokers are usually hosted at cloud platforms, and when they receive a new topic that was published from a device, they register it and stream to the subscribed clients (pub/sub). The client applications receive all the information from the devices, and its function is to automate processes, analyse the collected data, display it, generate graphics, Big Data, business intelligence and all these stuff... 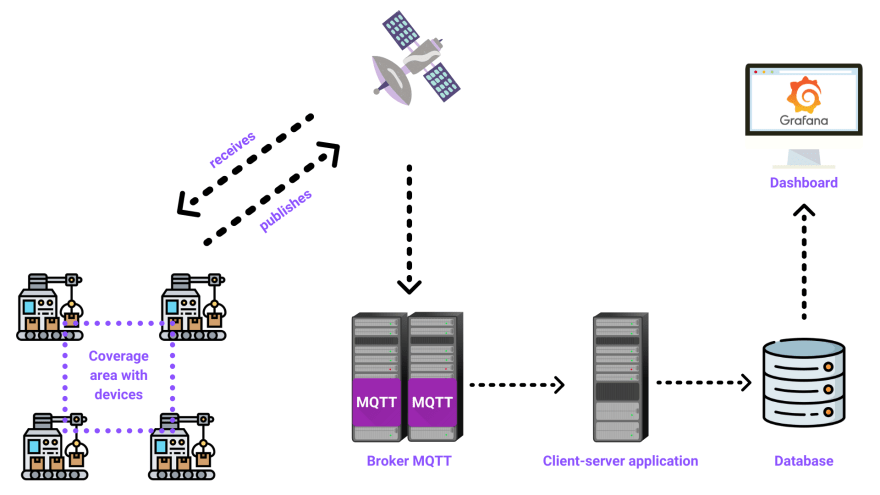 The image above represents, in an illustrated way, the functioning of a complete IoT environment, from the devices/sensors to the client-server application and the dashboard to display the analysed data. In this representation, the devices are doing the communication via satellite, this is because in many cases, the devices are located on distant and remote areas, so the signal is too weak and the only form to have data coverage is to send it by satellite.

Top 3 Free Docusign Alternatives To Use in 2022