You know it already, it's all over the news: Elon Musk has bought Twitter for 44 billion dollars.

I think it's a good moment to pause and reflect:

Do I really want to spend so much of my time and attention there?

How much money is that anyway?

What does 44 billions mean?
How to we make sense of such huge numbers?

The World Food Program USA asks another interesting question: How Much Would It Cost to End World Hunger?

They did the maths and found out $40 billion each year would be needed to end world hunger by 2030. So one Twitter would be enough to solve World Hunger for 2023. See ma', Silicon Valley could really make the world a better place!

I'm not saying Elon Musk will do that. He obviously won't.

As Shakespare used to say: to twitt or not to twitt, that's the real question.

Spoiler alert: I dislike Twitter for both accidental and structural reasons.

The accidental reason for which I dislike Twitter is that for me its leaders are morally bankrupt. And here I'm speaking about both the Elon guy and the people before him.

They have insisted enough already that their meaningless "free speech absolutism" bullshit justifies somehow - mostly by trusting their ideology over their lying eyes - not doing the work necessary to adress the needs of women & other habitual suspects being harassed every day, all day long, on their platforms.

Or even when they allow their engineers to do the hard but necessary work of detecting fascist propaganda, they enable it... but only in Germany 🤦🏻‍♂️

I'm just scratching the surface here, if you want to know more, I highly recommend Mike Monteiro's book Ruined by Design: How Designers Destroyed the World, and What We Can Do to Fix It.

Why a Twitter-like Service Wouldn't Work For Me

There is also an essential reason why I dislike Twitter.

At my worst, I am what Germans call Besserwisser and what xkcd readers call this dude: 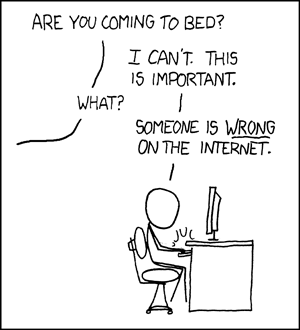 So what happens when lots of people like me share an endless feed, designed by psychopaths for "engagement" over meaningful communication, on all polemical topics of the day, all day long, every day, forever?

My advice is to give up.

The discussion has been locked. New comments can't be added.
Locking the discussion because I think we have discussed long enough already, not everyone will agree and that's fine.
View full discussion (72 comments)