The main superpower of a programmer is her ability to automate almost everything. That's where GitHub Actions shines... if you can write with confidence a GitHub Workflow in YAML to solve your particular problem. That's a big if. But if you can't, there is still hope.

YAMLs and JSONs surround us more and more frequently. While their syntax is simple and they allow defining hierarchical data easily, the tendency is also to overuse them for more complicated scenarios where a power of a regular programming language would be beneficial. This library aims at filling this gap, utilizing Kotlin as a modern general-purpose language with good internal DSL support. 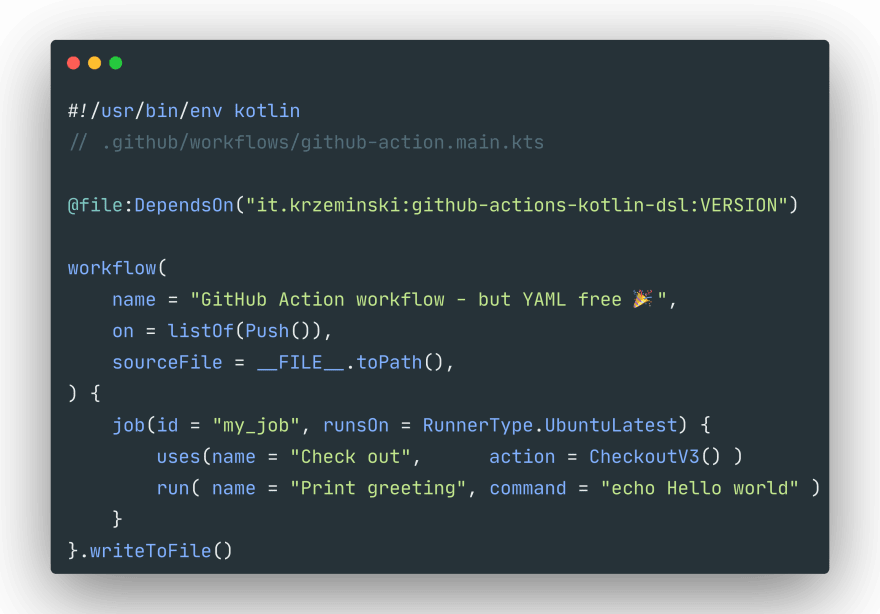 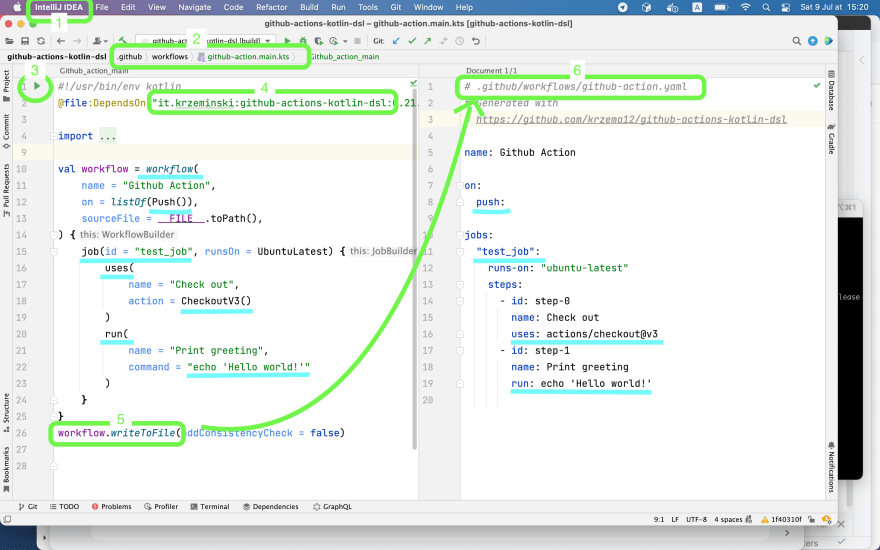 github-actions-kotlin-dsl(*) is a library that allow you to generate a GitHub Workflow for Kotlin Actions in a type-safe way.

(*) I know that's quite a mouthful. I personally call it github-actions.kts

1) Edit the script in IntelliJ IDEA Community Edition which is free and awesome
2) Put the script in the folder .github/workflows, make it executable
3) Install Kotlin
4) github-actions-kotlin-dsl is the library you use to build a GitHub Workflow object
5) At the end, you call workflow.writeToFile()
6) which generates .github/workflows/$NAME$.yaml which you can then run on GitHub Actions.

You can see underlined in blue that the main components of a YAML workflow have a striaghtforward Kotlin equivalent: workflow() Push() job() uses() run() GithubActionNameVxxx()

At that point, you may ask yourself:

GitHub Actions is a Wonderful Service But...

The main superpower of a programmer is her ability to automate almost everything.

Since that's precisely what GitHub Actions is for, all good right?

Unfortunately most people struggle to write a GitHub workflow solving their particular problem: And that's because YAML is a bad programming language - see below.

So instead we resort to copy/paste programming, trying to find someone that has already spent the time writing a workflow to solve a problem hopefully similar to ours.

Don't get me wrong, copy/paste programming is better than nothing, and I have written myself a guide to get a CI up and running in no time for Java/Kotlin developers 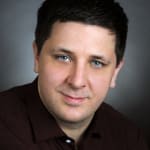 How do I setup GitHub Actions for my Gradle or Android project?

But we are missing out if we can't automate our particular problems.

So what's the issue? 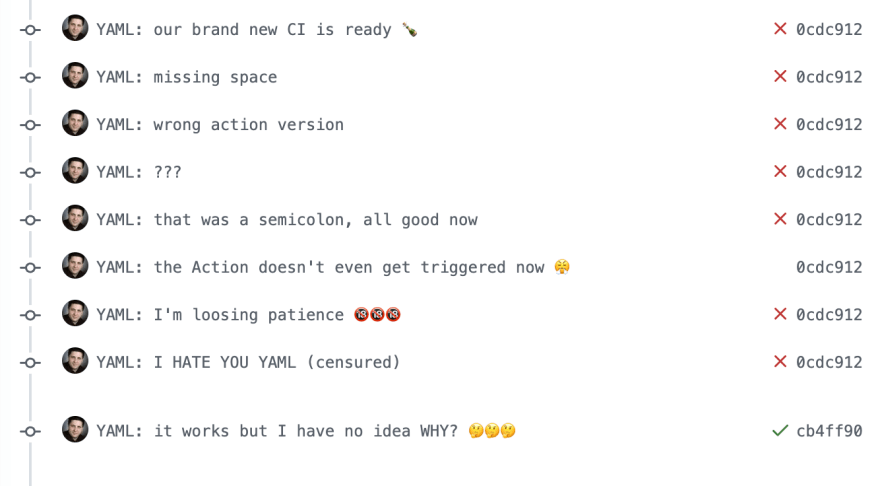 Average YAML developer trying to get things done, loosing ten minutes or more between each iteration.

YAML in general is just a different way to write JSON.

With a different set of issues...

But GitHub has extended YAML to something we should recognize as a programming language, according to the principle of Duck Typing.

*🐥 GitHub YAML as a programming language: 🐥 *

The issue here is that YAML was never designed for this

Therefore support in your IDE is quite poor. They do try to help but it's nowhere as good as with an actual programming language. Also the reason that YAML looks fancier than JSON is that its rules are less simple, but which means you are more likely to screw up.

What you can't see in the picture above is that the GitHub Actions YAML developer might be wasting 10 minutes or more for each iteration of her script!

So is there a way out of the YAML wasteland?

In YAML, an incorrect syntax looks very much like a correct one.

Which syntax is the correct one?

This time there is no debate. The simple existence of a type system makes all sort of tiny mistakes disappear!

The library also guarantees that whatever content it produces is valid YAML. No more waiting for the CI to produce a MalformedYamlError...

In addition there are runtime checks that will fail on you now and quickly, instead of failing slowly and later.

Can you find the 7 errors in the workflow above?

Let's have a look at the Kotlin equivalent

By just compiling and running the script we can prevent plenty of small errors that would have wasted each 10 minutes of our time on the CI.

Have a look a how this action is configured:

There are three issues here:

At the time I write those words, we have 89 supported action wrappers

GitHub Actions also have a powerful syntax for expressions.

And I think you get it now: we havre a type-safe alternative for them too:

So now I can see what you are thinking:

This is pretty cool, and I wished I had that when I got started.
But now I have YAML workflow that work,
and I don't want to restart from scratch.

I hear you.
I had the same concern.

And then a diabolic idea was born in my mind:

As it turns out it's possible, and after some intense hacking, the script-generator was born. It allows you to automate your migration to Kotlin.

You can then make sure the new YAML is equivalent to the old one by doing a semantic diff with https://yamldiff.com/

I won't go in all the details: read the friendly documentation

Behind the scenes: the Wrapper Generator

When I discovered the project, there were maybe a dozen of actions that were supported by the library.

My main concern was: how do you scale that up?

There are dozens and dozens of GitHub Actions. And they have new release adding or deprecating parameters all the time.

The answer: the maintainer Piotr Krzemiński and I introduced automatic generation of the action wrappers.

Creating this wrapper generator was a lot of work but it is worth it:

At the time I write those words, we have 89 supported action wrappers

Behind the scenes: GitHub Actions

The other thing that allows us to scale up with our limited time to the challenge is: GitHub Actions itself.

We are the first users of our library, and leverage the power of GitHub Actions:

For the motivated, our actions are available at: https://github.com/krzema12/github-actions-kotlin-dsl/tree/main/.github/workflows

This really hits home for me: what a superb asset GitHub Actions can be if you can feel confident that you can write a workflow to solve your particular problem.

What if I Don't Know Kotlin?

We are doing only basic stuff here. We build a Workflow object by calling workflow() then job then run("my command") or uses(MyActionWithParameters(....))

The only thing is that you need to install IntelliJ IDEA Community Edition but it's free and awesome.

The YAML and the Kotlin will get out of sync if you don't run the Kotlin script before committing it, if you forget to commit the YAML file, or if you edit the YAML file directly. We have a consistency check to fail early when that's the case. Just use workflow.writeToFile(addConsistencyCheck = true). The trade-off is that the CI will be something like 15s slower.

GitHub's YAML has a huge number of features so you may stumble upon one not supported by the library yet. We have a type-unsafe alternative to compensante those gaps. You can also look at open issues or create your own.

IntelliJ does not support Kotlin Scripts as well it does normal Kotlin programming. Hopefully this gets better with time.

Compiling and running a Kotlin script is slower than you are used to with an interpreted language like Python or JavaScript. But it's still two orders of magnitude faster than having to commit, push and wait 10 minutes on the CI.

If you use it in a team, you have to make sure that your colleagues undertand that the YAML file was generated by the Kotlin script. Mind you the first YAML line tells it: # This file was generated using Kotlin DSL (.github/workflows/hello_world_workflow.main.kts).

You are welcome to send them a link to my article :)

I'm a GitHub Action maintainer, can I help?

The one thing missing from the action.yml spec is the type of each input parameter. We are currently adding this information in our repository but it would be much better if it could live in your own repository in a action-types.yml file as some nice earlly adopters already do.

The title for this article was stolen from Michel's Pardo talk Kotlin: a new Hope in Java 6 Wasteland which made want to switch to Kotlin back in the days.

That's all I have friends. Thanks a lot of you made is this far.

I'm especially happy to be back writing articles, something I didn't manage to do since almost one year.

I would love to hear from your feedback if you give it a try.

Announcing Postman v10: The API Platform for an API-First World