Take a good look at this article, that will give you a quick grasp of what is Django, and why you should use it! 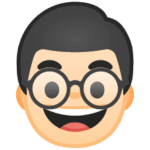 What is Django, and why you should use it 🐍

What you will learn 📖

Continuing with this article, here you will learn:

The source code of this tutorial is available in this Github repository:

A begginers hello world guide to the django web framework.

First of all, you have to install Python, which is one of the most loved languages in the world, and Django is built with it!

Check out the python downloads page 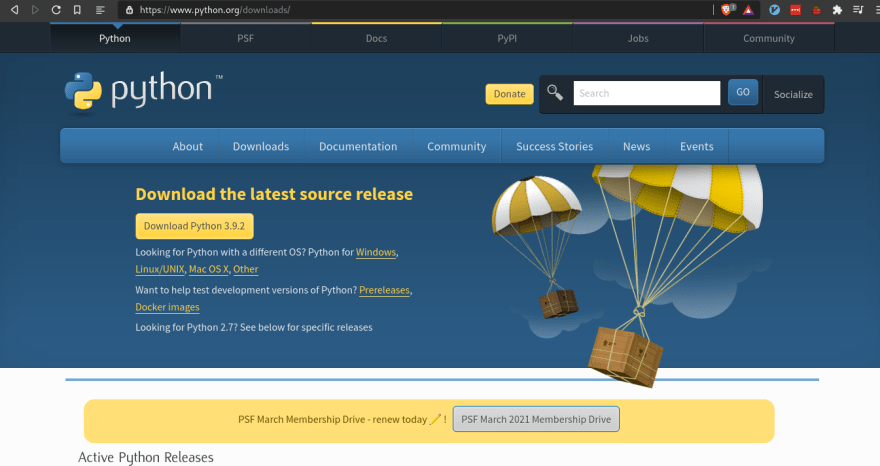 And install the Python 3 version for your operative system: Windows, Mac or Linux

Reminder: Most of Linux distributions, comes with Python Preinstalled so you don't have to worry about install it.

Depending in your operating system, you have different terminal emulators installed, so let's take a look of each terminal for Different OS.

In windows you have to preinstalled options, CMD and Powershell. Both are terrible 😂, but you can get the job done with them.

Note: In windows the file structure is different from UNIX based (Mac OS and Linux), so usually I recommend to install Git bash, that lets you to run the same commands I'll be using in this tutorial, but I let it up to you.

In these operative systems, you have built in terminals and you can search it directly in your programs search bar. 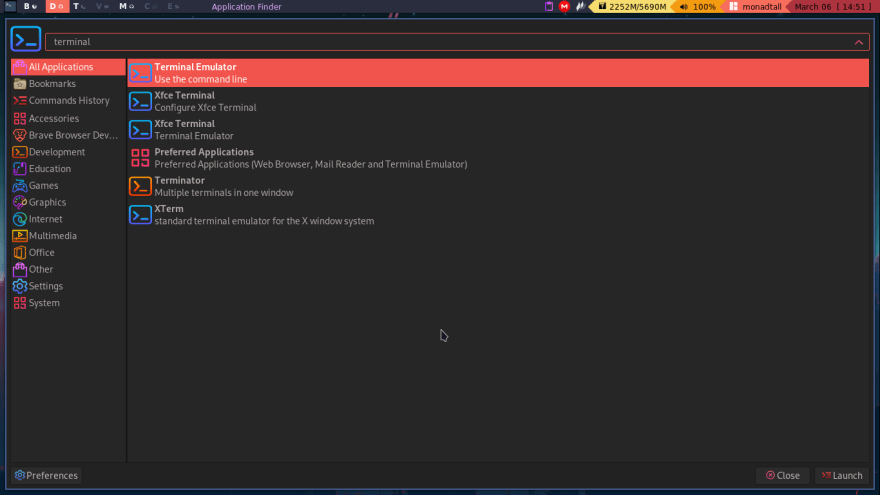 Also if you find too complex to use your system terminal, just use integrated terminals from different code editors

For example Vs Code 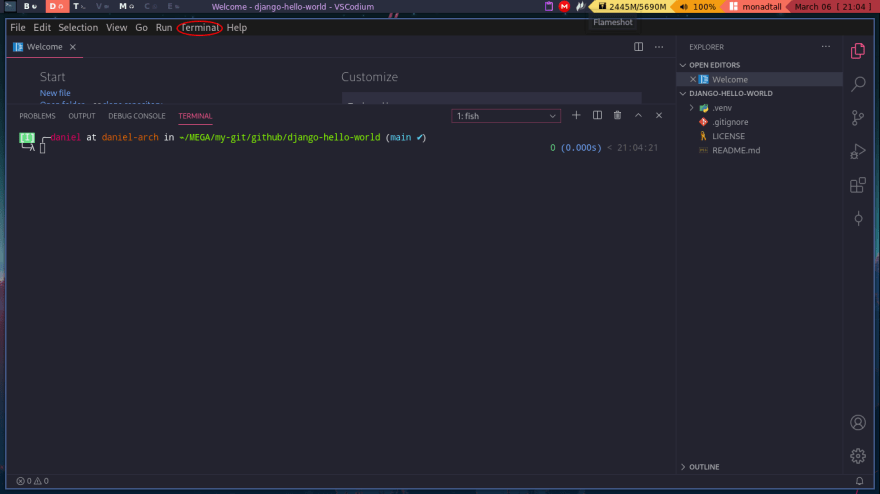 Now that you know to open up your terminal, let's check if we have Python installed

If I run this command I get:

Which means that the Python version. I have installed in my system is Python 3.8.6.

pip stands for PIP install packages. It is a Python package manager, that will allow us to install different useful packages, included Django 😆

To check if pip installed, we use

Before we can install Django, we should set up a virtual environment, to do that, we run

This will create a Virtual environment with the name of .venv.

If you want to know more about virtual environments, just take a look on this post.

You can easily install Django, with a simple pip command

You will see something like this in your terminal 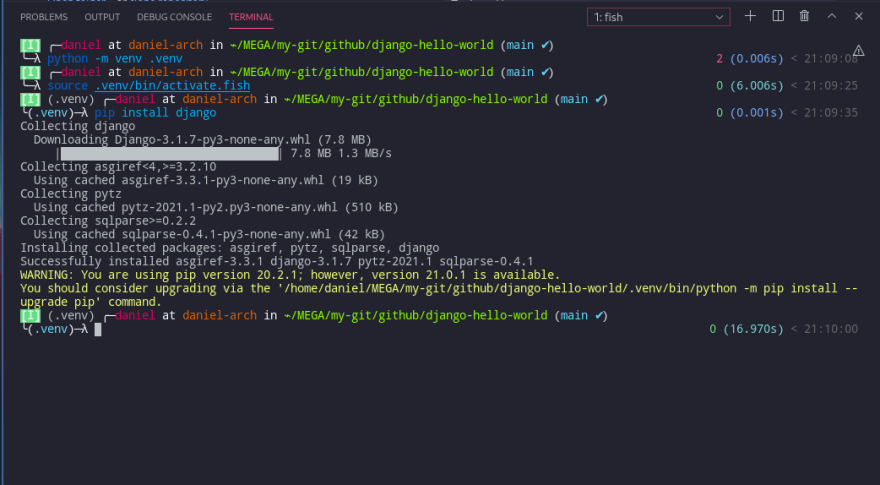 As you see I installed Django 3.1.7, which is the latest version of Django, in this moment.

Advice: I always recommend to use the latest django version, since it has the more patches and security fixes.

But if you are already working with a team, or for a company with an older Django version, you should continue using it.

Anyways the Django project team, had been doing an amazing job, because no matter if you learn the Django 3.x version, 2.x or even 1.x (Don't use it please 😆), most of the core functionality still the same.

To create a project in django, you will use the following command

This will create a folder name helloworld, and inside that folder, there will be another folder named hellowold, and a Python file manage.py

I know this file structure could be confuse 😕, so I'll explain it in detail.

As you may notice, when you create a project in Django, there will be two folders named the same, but these two have differences.

The root folder /helloworld is just like a container, it doesn't matter for django, and it is only there for organization purposes.

You can rename it with whatever you want.

In the other hand there is the inside folder /helloworld/helloworld. It is a Python package since it has a __init__.py.

We will use it to configure our Django project, and to import everything from other apps. (Later we'll see what is an app 😉).

Inside the helloworld package, we can found another important files:

Finally the manage.py file, is a command line utility that let us interact with the Django framework.

To run a local server, run the following command

You can specify a port for the server. So this time I'll use the port 8080, as an demonstration.

Note: You will see warning about migrations, but don't worry you will not manage them in this tutorial.

After running that command, go to your browser and type:

After doing that, you should get a page like this, that confirms the installation 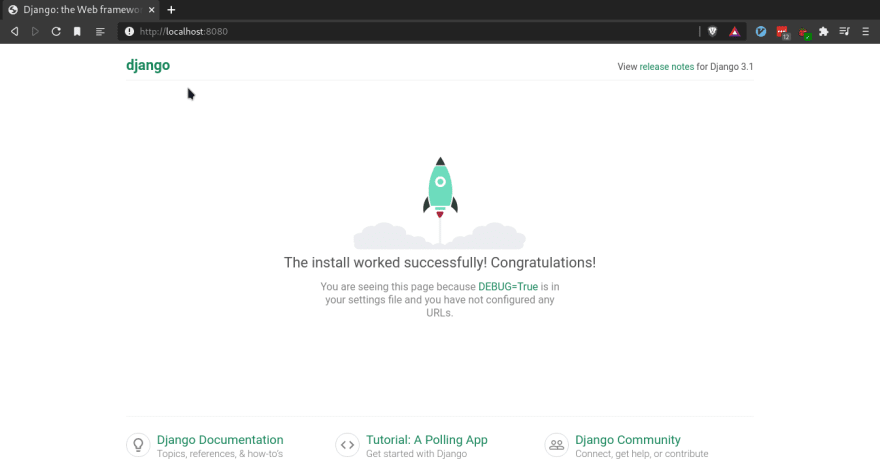 Ok, you got it. You installed your first Django project 🦄

Before continue, I want to tell you about the MVT pattern or Model, View, Template. I know that it sounds confusing, but please don't turn off your brain 🧠, and don't give up 👏. 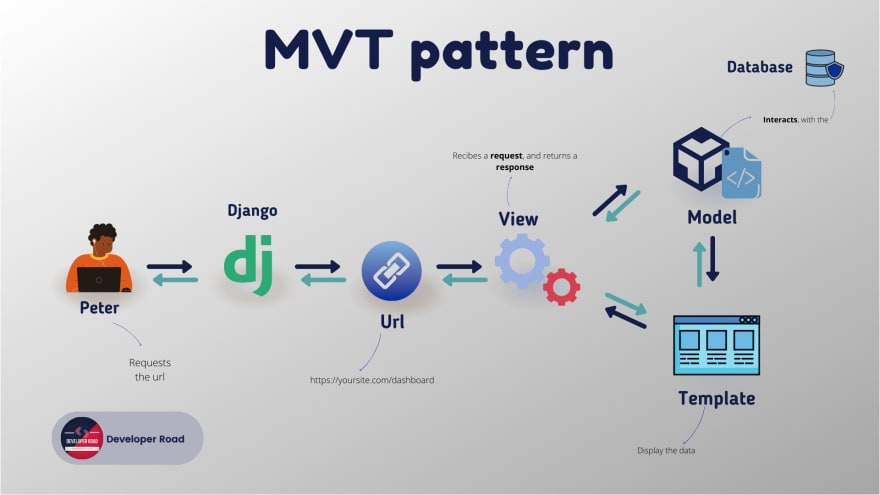 First of all, why Django uses this pattern? 💭

Django uses this pattern, because it allows the developer, to skip the tedious part of creating a custom controller.

Now, let's get into the different parts of this design pattern: 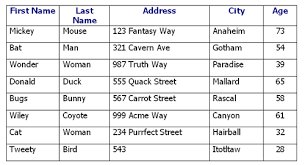 Due to the models, we as Django Developers mustn't learn SQL 💽 (although it would be a good plus).

That return of html files, is called *Template *. 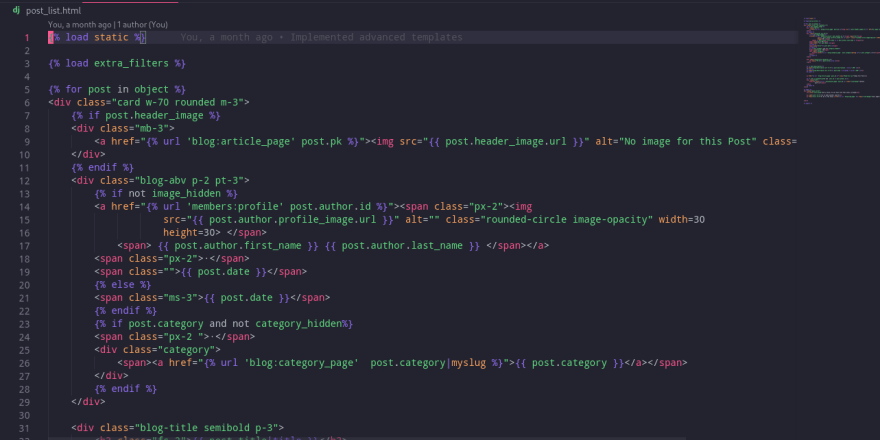 These templates, are designed to "Don't repeat yourself", since Django uses a special language DTL, to build them.

Since this is a beginners guide, we will only use, Urls, Views and templates 😉.

Before continuing, we're going to create a django app.

Our app is called myapp, and it contains several files and a strange folder named migrations 😮.

Let's take a look at the structure of our app.

Differences app and a Project

Do you remember that we already created a project, called helloworld ?.

Well now we just created an app, and here are the differences.

Until now, we haven't touched any code, so let's get into it.

We just created an app, so let's install it in the settings.py file

After installed our new app, we can get into url patterns.
Go to the urls.py file, in our project folder and modify the following things.

Here we imported the function include, that as the name suggests include the url patterns of external apps 😀.

Then we created another path, with the destination of '', that means that when a user hits the url, without any other pattern, we call the urls of the app myapp

As you may noticed, we are calling the urls as a Python package, so myapp.urls means:

But you would say me: Daniel! are you crazy 🤯, that file hasn't been created.

And yeah, you are right. So we need to create it manually.

You can create it from your code editor, or from your terminal

After creating that file, we are going to made the fun stuff! 😝

Here we imported the HttpResponse class and we passed a variable response, with a value of: "Hello world .."

Ok cool, but next we have to create an url for that view, let's go to the myapp/urls.py file.

As in the urls.py of the project folder, we imported path, and created url patterns for our app. Also we used a new concept, we passed a view to our path function.

All of the stuff we just do, means that each time that we hit localhost:8000, we request the url pattern of "".

That url will call our view function named helloworldview, that takes our request, and returns a HttpResponse, with the content of "Hello world".

Not that hard to understand, right 😅?

Now run the server, and watch your first app working! 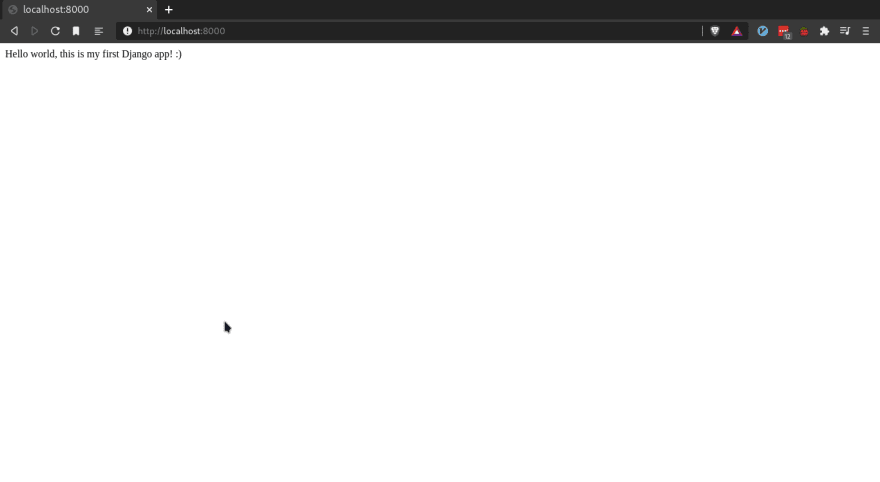 The last part of this tutorial will be about, Templates in Django 😀

Your first template in Django

Before using templates, we need to create a folder in our app to be able to use it.

So let's create one:

You just created a directory, named templates. That tells Django to search for templates in that folder.

Create a file, named index.html, that will be our first template.

Now, paste the following html, in the template.

After that we are going to modify the helloworldview, in order to render our template

Here, we used the function render, that takes as parameters, the user request, the name of the template, in this case index.html, and the context, that we will see how to use it later.

After that minor changes, you'll see something like this. 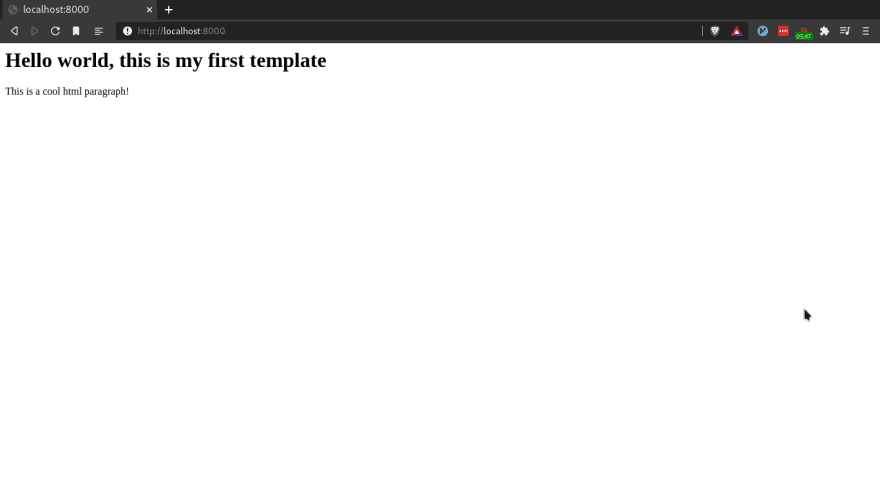 Now we will see the basics of Django template language.

Create a file base.html, inside the templates folder.

There we will paste the basic structure of a html Document.

But with a little change we are using DTL tags. Those are of the shape {% tag %}. The tag we used in this case, is:

That tags, allow us to put html code, in block codes, as we are going to see now.

Here we just do a strange thing! 🤯, we used template inheritance, and DTL blocks. 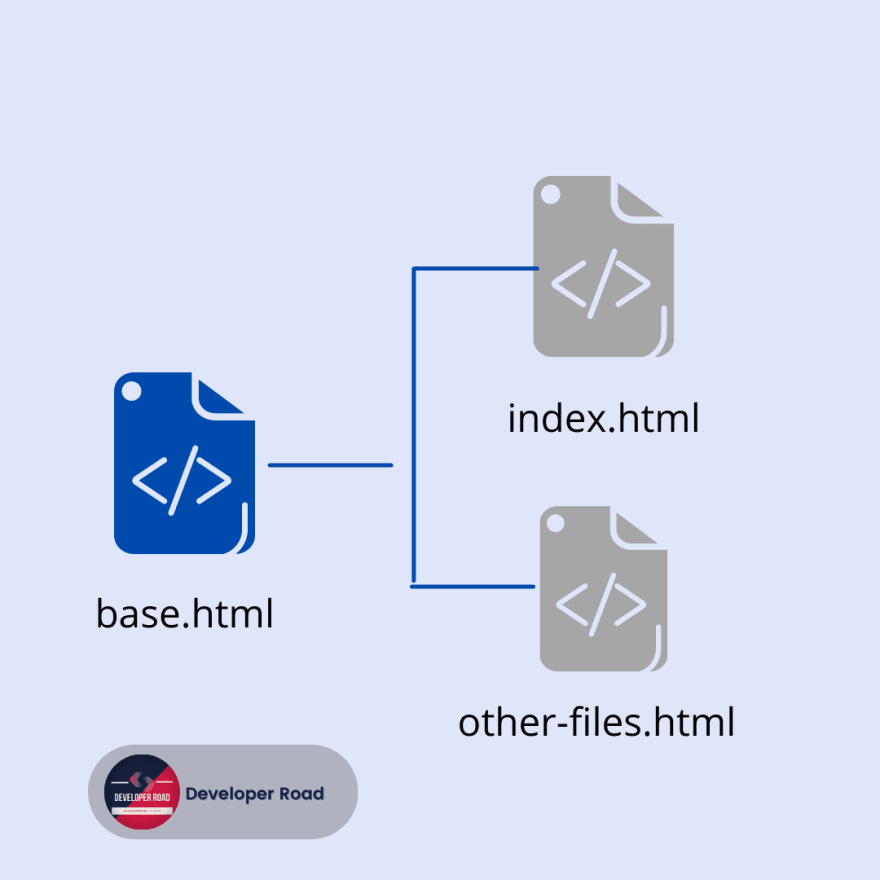 You call, the inheritance with the tag {% extends "name of template" %}

If we look at the source page of our page, we get something like this.

Context variables and for loops

We are going to pass context variables from our views. so let's modify the view

We are passing, a context dictionary to our template. Our key "people" is a list of strings.

Now we are going to make a for loop, to iterate through that list 😁.

As you may notice, the for loops in DTL are exactly the same as they are in Python.

And variables, in DTL are represented with {{ name_variable }}

If we check our server, we'll get something like
this. 🤯 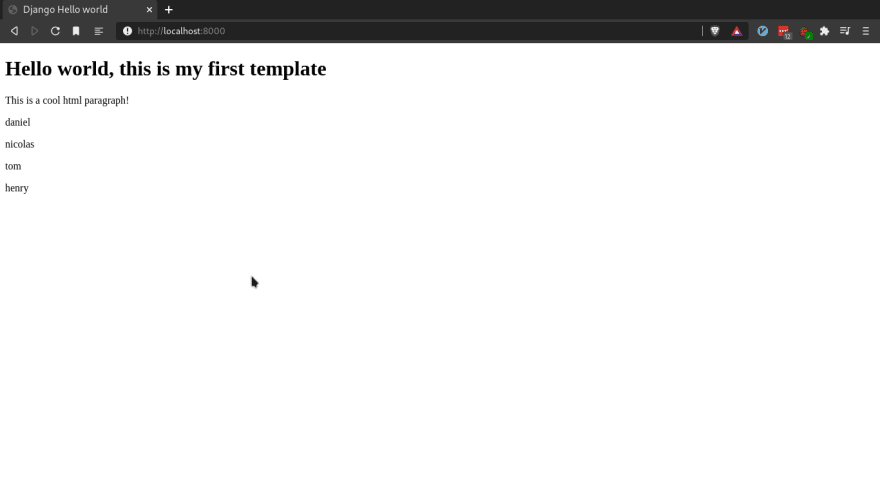 In this tutorial, you learned the basics of django.

From creating function based views, to building url patterns and using the Django template language 😃.

Any questions or doubts ? Let me know in the comments

Follow me in My blog,
to get more awesome tutorials like this one.
Please consider supporting me on Ko-fi you help me a lot to
continue building this tutorials!.