The Command pattern wraps the request into a specific object that has all the information necessary to perform its task. You can think of it as the next stage of refactoring, where at first we extract the code to a separate method, and then to a separate object, taking the arguments needed to execute the request in the constructor.

Since the request is an object, it can be sent to a separate object (CommandProcessor) for execution, which allows for their queuing and facilitates logging events. The same command can be used in different places in the system, encapsulating the entire logic of the request execution, which prevents code duplication. It does not have to be the same instance, but the class.

The request object, in addition to the standard execute() method, may contain a method like undo(), i.e. undoing the changes made by the request. Virtually all graphics programs or word processors have this option. They could be storing each change in the form of Command in some buffer with limited capacity (hence the possibility of e.g. only 3 undos), and if the user wants to undo the last change made, theCommand is pulled from the buffer and the changes made by it are undone.

As already mentioned, by default the Command object has an execute() (or equivalent) method. There are several other classes in this pattern: 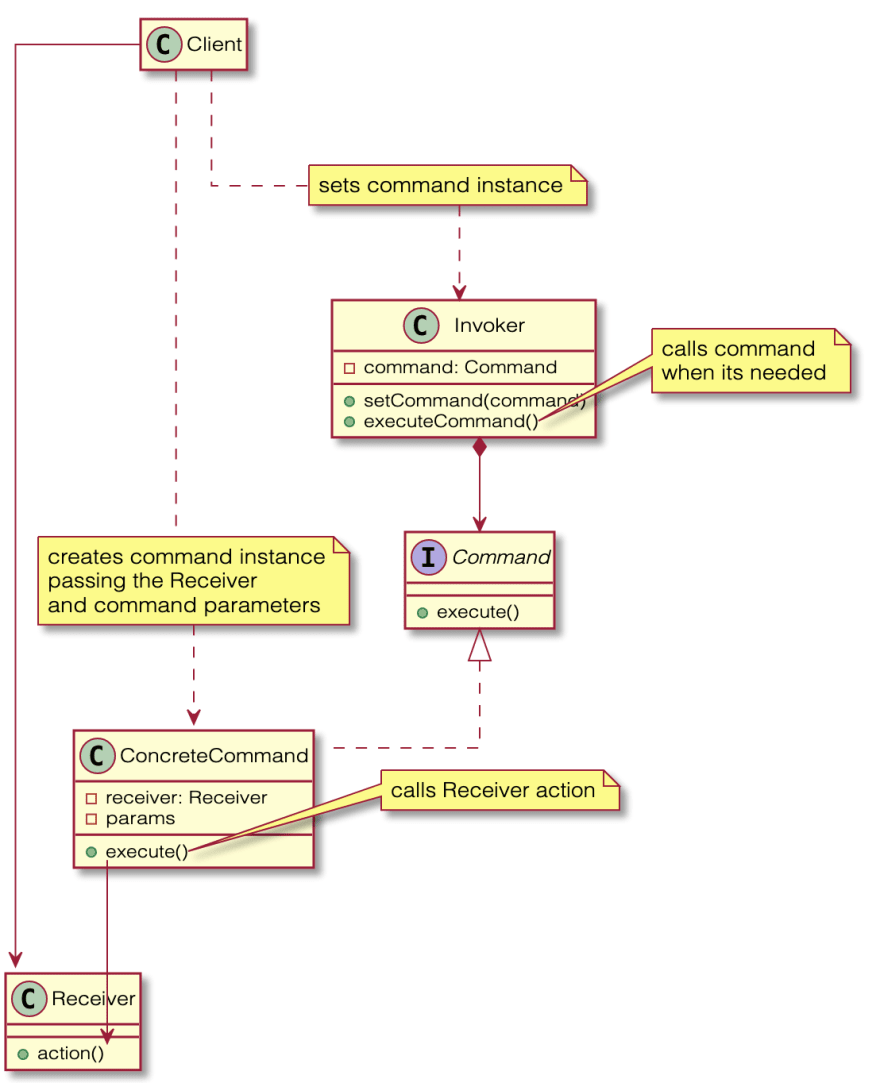 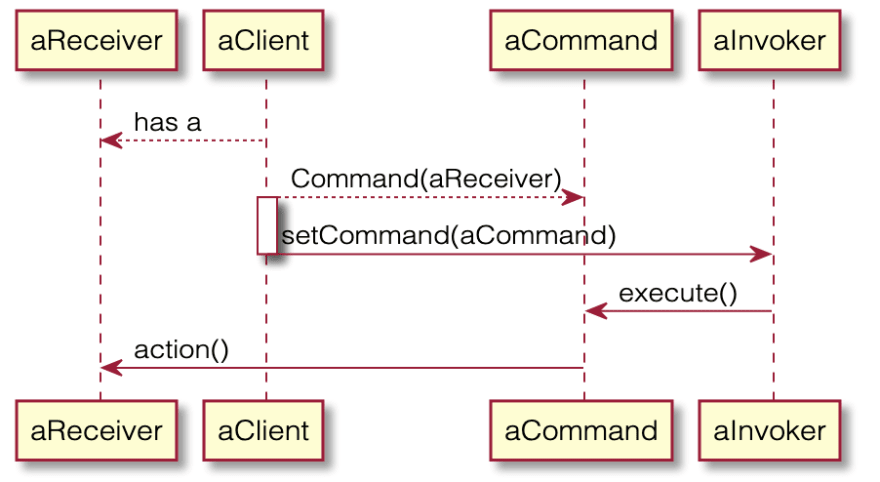 In such generic form it can be implemented like this:

The command may return some value. However, this will not always be a good practice. While returning Success/Failure will usually be OK to inform the calling class about the command execution status, returning some specific data will conflict with the CQRS - command query responsibility segregation approach. The point is that the command either changes something or returns data.

Let's take this situation: you display a list of names, each list item can be edited and the name is changed. A name change is encapsulated in a command that operates on some data repository. Should such command return anything, and if so, what exactly? The whole list of names with the updated name? What if list is paged, do you return just the page with the updated item, or whole list of items up to this item? Or should the command return the changed name itself, so then Invoker has to update the displayed list. But then you have 2 representations of the names list: one in the repository and second one in the view, even if values are the same (but there is nothing to guarantee this).
It's better if the command returns simple Success, which will cause the view to download the current list of names from the repository or show errors message. Or better yet, if the view always keeps its list up-to-date with repository by some sort of data-binding or Observer. After executing the command, the list will update itself, and you don't even need to return any Success/Failure from the command, unless you need to handle the error.

Another way may be to pass some callback in the execute(), but maybe let's not go that way :)

Closing the entire command in an object allows it to be passed to the external Processor instead of being executed immediately. The Processor can queue and execute commands according to its internal logic, but from the Invoker point of view, it doesn't really matter. The Receiver can be moved from a command to the Processor, thus the commands will only take its parameters, and the rest will be handled by Processor when calling the execute().

However, make sure that the execute() method always has the same signature, and you do not have to implement special handling inside the Processor due to the type of the command. As long as Command and Processor are in the same domain (e.g. HTTP requests to a specific API, sending messages via Bluetooth), there should be no problems with that. If a given Processor needs to pass different Receiver type when executing commands, it may suggest that they should go to a different Processor.

The CommandProcessor is an object that processes commands sent to it. Adding new commands does not block their execution because it runs in separate scope. In this case, commands that return nothing will work best. You just throw them on the queue, and the command effect (if needed) should come through a different channel, as in a proper CQRS. Queue and thread management is on the Processor side, the Invoker doesn't have to deal with it, or even know if there are coroutines, Java threads or some RX. Commands are executed sequentially, one after the other. Combined with delay() for the Receiver action, this has the effect of immediately adding commands to the queue, and laboriously executing them.

Queue commands execution can also be done in parallel with multiple launchProcessors taking Channel as parameter:

But this will also mean that i.e. if Command 1 takes longer to execute than Command 2, the latter will be finished sooner which may not always be a good thing. It depends heavily on the case.

Commands may have a method that allows undoing the changes they have made, i.e. undo() known from graphic or text editors. The implementation will strongly depend on the case, but it can be assumed that the command remembers the state before the change and restores it, if necessary. Holding multiple states in history eats memory and therefore the history buffer is often limited to the last 3 commands (or similar). Undo execution of a command can also be achieved by executing a command with the opposite parameters, then there is no need to hold the state, and the execution of undo() itself can be saved in the history. Undoed commands may end up in a separate buffer, allowing them to be executed again with redo().

Strongly simplified example of undo() with keeping the before-execution state:

Why not just use lambdas?

It may seem that creating a whole class and then an object to perform some action is a redundancy, and that the same functionality and readability can be achieved using lambdas.

Example using a similar processor from the previous case:

We tell the CommandProcessor: execute this block using your Receiver instance. However, we lose the ability to parameterize command objects. Lambda can take parameters, but they will be used at runtime, which is in the CommandProcessor. Of course, they can be passed in the process () method, but then it is difficult to talk about command encapsulation if you have a block of code in one place and parameters need to be passed in another.
If the action() method were suspend, it would need to be handled in the lambda block, wrapping the call in some CoroutineScope. It could come from CommandProcessor just like the Receiver but this is another complication that occurs when Lambda is created.

To sum up: if you want to have a parameterized Lambda, passed to the processor and use it in multiple places of the system - create a class.

It may be my professional bias, but controlling remote devices is perfect for a real-life example of using the Command pattern.

Lets have some devices that can be turned ON or OFF and a remote control to set these devices. The remote control is not directly connected to any specific device, it can control any of them, or multiple at the same time. The remote is also not aware of the device it's controlling, it just handles pressing its buttons.

Adding the Command suffix to the names of specific commands seems to make sense. It clearly defines what the class is used for. In the case of the Receiver or Invoker, which by nature already have their specific tasks and just found themselves in this pattern kinda "by the way" would only be confusing. You can see that in the last example of Home Automation.

The Command is one of my favorite patterns, most of the time I have used it with some form of CommandProcessor. It perfectly encapsulates the request and allows it to be moved and reused. It facilitates refactoring because it is easy to replace one command with another, or to change the internal implementation without affecting the clients of it.

Command objects can contain a method to undo the changes they made. This is done by keeping the state of the Receiver before executing the command, or by executing the command with opposite parameters. Reverted commands can be put on a separate buffer, which allows them to be redone if necessary.

How To Combine Flows In Kotlin