The Strategy design pattern defines a family of algorithms and allows them to be used interchangeably. By algorithm, here I mean any logic, be it sorting, searching, or computing some value from data. It does not matter. It is, in a sense, an extension of the Template Method pattern, but inversely to it, Strategy prefers composition over inheritance. Strategies do not inherit from any specific class but only implement a common interface. This allows for easy code encapsulation and algorithm replacement without the inheritance overhead.

An example of a problem that can be solved by the Strategy may be the way of calculating the price taking into account the promotion kind:

I'm aware that Double is not the best type to use for money operations, but for the ease of use in this post examples I decided to use it.

We have 3 promotions here, one of which NoPromotion does not change anything. The implementation of the method calculating the promotion is in the Bill class - so in addition to collecting products, the class also calculates the final price, we do not have the Single Responsibility Principle preserved here.

If there happens to be a new promotion request, just add an enum and its implementation inside Bill class. The IDE will report that the new case is not handled if you forget. It doesn't look extremely bad, other than the lack of SRP.

Now let's assume that in addition to the standard receipt, you want to be able to issue an invoice that takes into account the same promotions.

You could copy the code that calculates the promotion, or you could artificially extract some abstract receipt class with promotion implementation from which Invoice and Bill would inherit. Unless, of course, they are not already inheriting from another class.

And then there will be some class that does not fit into this hierarchy, which will also require the implementation of promotions...

And then the 'Strategy' comes in, all in white 1. It allows you to easily transfer the method of calculating individual promotions to separate classes with a common interface. In such a way that customers do not even need to know what specific promotion are they using.

Let's start from abstract implementation to understand all pieces of this pattern:

We have here the Context class, so the client using the Strategy. It only knows the strategy interface, not the concrete classes. This allows you to easily expand the family of strategies with a new one, without updating the customers. Due to the use of the interface, and not the Strategy class, specific Strategies are loosely related to each other, while guaranteeing clients a common API. 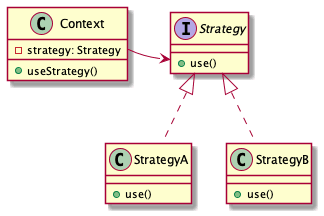 Promotions can be encapsulated in specific classes:

Having such implementation of promotions, the Bill class gets simplified to:

Maybe this is not the best example, because we still don't have SRP - the Bill still calculates the final amount, but now at least delegates it to thePromotion object.
Adding a new type of promotion doesn't cause any update in the Bill class. The same promotion classes can be used in the Invoice class or any other class that needs to include them.

It is much easier to test the logic in separate classes than in the initial example with the when condition. Adding another promotion will not cause the need to fix the existing tests, but only add new ones for the new class.
In order not to spoil this testing awesomeness, make sure that Strategy gets all the values it needs in the public method or the constructor, rather than magically extracting them from some configuration.
Often the 'strategy' does not need to store its state, but only performs some actions on provided data. This is one of the few cases where the use of Singleton makes sense.

OK, with single strategy it's cool, but nothing stops us from making Bill have many kinds of strategies. Final price may vary depending on taxes or loyalty program.

Strategies can be passed as a parameter in the method where they are to be used, but they can also be passed in the constructor of a client object. Below is an example with default values (probably the simplest kind of Builder in Kotlin), which allows you to overwrite only those strategies that are actually to be different than the default ones.

The calculation of the individual components of the final amount must be performed in a fixed order, you cannot charge tax from promotion, etc. Similar to the Template Method approach, the Bill class is responsible for the correct sequence of steps, but the Strategy pattern allows the implementation of these steps to be replaced.

Different taxes would apply to specific types of products rather than the entire bill. However, assuming that tax law is constantly changing, the use of the Tax strategy allows for quick response to new regulations without the need to update strategy clients.

I admit that I'm not a fan of such operations queuing with the run () methods. Fortunately, this can be improved by using the extension functions:

And then we have:

Because the Strategy tends to have a single public method, you can consider using the invoke() operator. Additionally, the annonmous class instead of a default implementation of the strategy, to not multiply the NullObjects:

Naming conventions may vary from team to team or project to project. I personally prefer the meaningful domain name rather than using pattern-function-part modifiers.

Using the first style, I don't even have to think if I'm using the Strategy Pattern. I'm using the domain Promotion class that knows how to calculate the final price with its internal rules. What information does it really give me to have the Strategy in the name? Should we also add Singleton to every Kotlin object name?

This preference stands for all design patterns. Sadly common practise (especially in older projects) is to strictly stick to often unwritten rules. So you can immediately know that the class is part of particular pattern. Because someone (like a junior-dev with 20 years of experience) has memorized a book with patterns and is able to implement it only fallowing the template strictly.

If you are interested in this topic, I can recommend a great talk by Kevlin Henney - Seven Ineffective Codding Habbits of Many Programmers, where amongst others, he talks about naming.

The Strategy pattern creates a family of algorithms, enclosing the differing logic in separate classes while hiding it from clients behind the interface. It enables the interchangeable use of implementations. The use of the strategy simplifies the customer code, avoids code duplication and conditional statements. Significantly simplifies testing - by separating client testing from strategy algorithms.

This pattern should be used quite often, even if initially the whole "family" of strategies will consist of 1 class. The advantages of encapsulating code outweigh the disadvantages of adding an interface and a new class. Often, sooner than later, it turns out that a given algorithm needs to be used somewhere else, or there is a need to add another one.
However, don't overdo it. There will be places where creating the Strategy is pointless, when an algorithm is 1 line of code used in 1 place with no prospect of spreading.

Kotlin offers interesting possibilities for using the Strategy, thanks to named arguments, using theinvoke ()operator and theextension functions. However, you should pay attention to whether the syntactic sugar makes it difficult to test or to use the code elsewhere.

What is Authorization service and why does it matter?