As the name suggests, the Adapter pattern transforms the class interface to another one requested by the client. Using the Adapter allows incompatible classes to interact with each other. Another term for this pattern is Wrapper.

The adapter allows you to "map" an adapted interface (Adaptee) to the expected interface (Target) by the client class without adding another level of inheritance. Such inheritance would not always be possible if Target was a class rather than an interface. The new class would have to be both Target andAdaptee at the same time.

Instead of creating a new Adapter class, you may also add a method in the client that takes an object with an Adaptee interface, but it will cause the class to expand with a lot of similar methods. The client class can also come from 3rd party dependency, and then it will not be possible to change it.

The adapter is essentially a single class, but it's important to understand its surroundings. 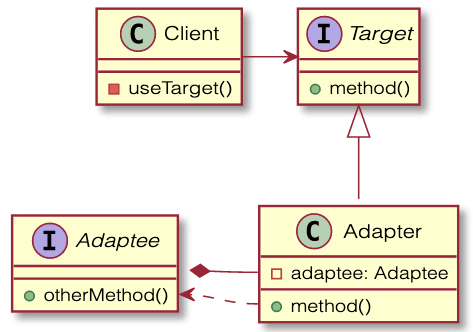 You can see here how the Adapter class uses the Adaptee object within the Target interface. The Adapter encapsulates the logic of mapping one interface to another. This avoids unnecessary extending or modifying the client or Adaptee only for a specific client.

Different clients can use different adapters of the same Adaptee class. Thanks to this, there is no need to adapt Adaptee to a specific client or several clients. Just look at this monster:

The adapter will work well for a list of elements on which we want to perform an operation for which they were not created.

Using the Adapter allows a clean link between classes that we have no control over (from external libraries) with our code with different interfaces. It is a good practice not to use the 3rd party interfaces in the whole system, if possible, but only at the point where the library meets our code. That provides the exchangeability of libraries, easy version update, and protects your code from the forced changes dictated by API alterations in independent software pieces.

I realize that this is not always possible, and sometimes it is even not worth creating an intermediate interface. However, it would be stupid in a long-lived project that multiple teams are working on to have a problem because some silly utils library changed its API after update.

If something quacks like a duck, swims like a duck and flies like a duck, it must be a duck. Contrary to strong typing where we know for 100% that the object is a duck because it inherits from the class Duck, here we are interested in the available behavior of the object. You can see that in Python or JavaScript. Kotlin is strongly typed language, and does not allow for multi-inheritance, but extension functions do allow you to "append" functionality to a class. So we can have a species-fluid dog: 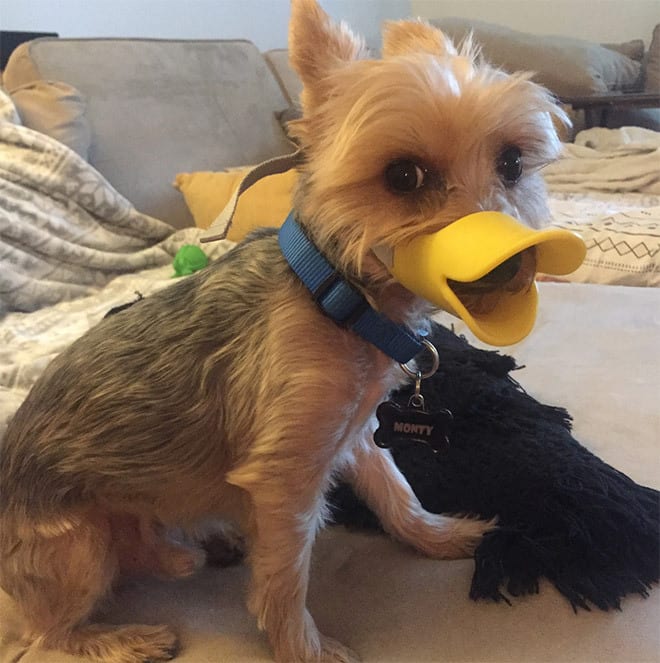 This York doesn't look happy. And it's definitely not a duck. But if it can quack, and that's all we need, it should be good enough?

Going back to the list example, instead of creating an Adapter, it would be enough to add an extension function for Item:

Extension functions are generally a great feature, and in such a simple example, they'll probably do a better job than the additional Adapter class. They can also be added to classes that we have no control over, such as those from libraries.

The problem arises when we start adding more and more of these functions to a specific class, in various places in the code. The IDE is great at suggesting possible methods, you can easily jump to implementation, but during the code review, it can be hard to figure out where the class has a given method from - because it is not in the class implementation. It can also obscure the class interface or implicitly override methods.

In this example, I have added 3 extension functions. The case of prettyPrint is especially interesting, where the implementation is different for the genericItem interface and for the specific AnotherItem class. The IDE and the compiler don't see any problem. The second method will be just used with AnotherItem. The extension functions can be written anywhere in your code, even in very distant places from where the class is declared.

Imagine a situation where you created the extension function to a generic interface and used it for a long time without any issues with all the different types implementing this interface. At one point a completely different team needed an extension function for a concrete type, so someone wrote a method with the same name and signature at a convenient place in code (for them), overriding your method for the generic interface. Without any override keyword :) tests may catch it, but they don't have to. Code Review was probably done by someone on the other team, so until something starts behaving in an unexpected way, you probably won't find out about the entire operation. And then looking for the cause of the error may not be pleasant...

We have a few problems here:

Closing all "extended" functionality in an Adapter, for example, ItemPrinter would avoid misunderstandings and aid code review. In Git, you can easily see who authored or recently modified this class and add them to a pull request as well. For extension functions, this option also exists, but methods can be scattered throughout the system, making it harder to find authors, and if something is more difficult than hassle-free, no one will do it.

We have a Shape interface which is implemented by e.g.Circle. Additionally, each shape has its own 'ShapeManipulator', an object that knows how to modify the size, position, etc. of a specific shape.
The Window class displays the figures on the screen

And now we want to be able to display the text on the screen, next to the geometric shapes. However, the TextView class is not a shape, it has a different interface and comes from 3rd party library, for example. It is also such a complex class that there is no chance of rewriting it using the Shape interface, or changing the behavior of the Window class.

I have intentionally omitted here return types or display logic of elements. Such an 'Adapter' in a real project would be much more complicated. But I hope the idea here is clear.

Here I have mixed feelings about whether adding Adapter in the name is necessary. On the one hand, it's clear information that the object only maps one interface to another. On the other hand, this information may not be needed at all, clients are only interested in the interface. Does ItemAdapter or ItemWrapper say more than ItemWithPrettyPrint? Moreover, if we create more adapters for different clients for Item, naming them ItemForClient1Adapter doesn't look great.

Therefore, I tend to name adapters from the object they adapt (Adaptee), and the interface they implement (Target).

The Adapter or Wrapper Pattern allows you to "translate" one interface into another, expected by the client class. It is especially useful when the adapted object comes from 3rd party library, and you do not want to make your system depending on that interface, creating the so-called anticorruption layer. Adaptee interface changes will only affect the Adapter and not the rest of the code.

Kotlin allows, through the extension functions, to provideAdapter-like functionality without having to create an entirely new class. This will make sense when you are not interested in the type of object but its capabilities, which is often referred to as Duck Typing. However, extension functions can obscure the actual class interface, override one another, and cause chaos in general. By limiting their scope, you can deal with it, but if their number starts growing for a specific class, it may be worth setting up a separate wrapper class to organize them.

How to get matrix columns without numpy in Python

C/CPP and the NISTIR 8397 Standard, Minimum Verification Tests for Cybersecurity