While being aware of our struggles and finding healthy coping mechanisms are necessary, we receive enough negative messaging on a daily basis. This article is all about how ADHD traits can be a benefit when you're coding.

When I started this series, my goal was to normalize the daily struggles of those coding with ADHD. As a result, I barely mentioned positive aspects of ADHD traits. When I did, it was mostly to say the structure of development jobs can mitigate some of our struggles. I've realized that highlighting the struggle wasn't enough - it's time to celebrate being a firework in a world that wants you to be a cube.

Absorbing All the Information

As I'm taking in the whole picture, I'm naturally inclined towards full-stack, systems thinking, and product engineering. Rather than being pigeon-holed into one system, I enjoy traversing the whole stack and thinking about how the puzzle pieces fit together. I love projects about getting the front-end and back-end to talk to each other. Where other people can get tunnel vision just making sure a feature works on its own, by default, I'm thinking about its role in the system and whether the user would actually benefit from the design.

If you're hyperactive, the constant flow of thoughts can be daunting. I can rattle off several ways it makes my daily life harder. However, it is the definition of brainstorming and coding is a creative endeavor. We can struggle to execute or choose the best ideas, but there is no lack of them. In a team environment with a work prioritization process, this natural brainstorming is supported and can really shine. 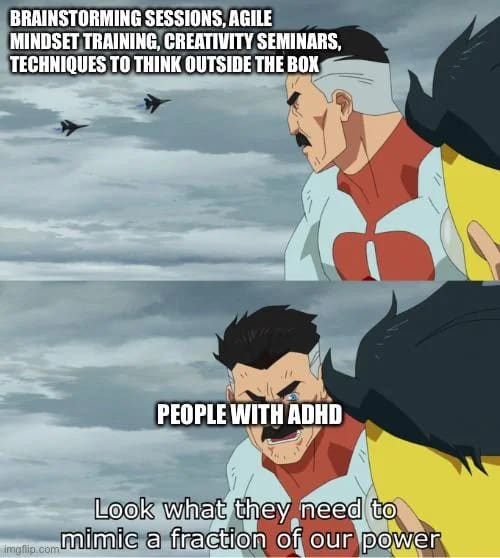 If you're not hyperactive and your inner monologue is less or not at all constant, that doesn't mean you don't have plenty of great ideas. People with ADHD often reject the status quo. I know "we've always done it this way" has never worked on me. I'm up front with employers in interviews - if you don't want someone who asks lots of questions about your process and design, don't hire me. Uninhibited by the status quo, inquisitive, and constantly making those unexpected connections, we're thinking outside of the box automatically.

If you can explain to me why I should care, I'll be all in. The passion people with ADHD feel for a subject or task often becomes all-consuming hyperfocus. This includes not stopping to question if it's hard, being too willing to work long hours, and wanting to talk about it non-stop. In fact, during the interview process, many hiring managers took the way I talked about coding and learning to code to mean I was the elusive Passionate Programmer. In reality, I'm passionate about anything that grabs my interest and coding puzzles are really good at grabbing my interest.

ADHD people love to go down a research rabbit hole. If it piques my interest at all, I'm Googling it. Development is made up of Googling rabbit holes. I can think of numerous examples of how reading about a JavaScript quirk because I was curious came in handy months later.

If you think about it, troubleshooting a bug is a series of rabbit holes that leverages many of our skills. It combines systems thinking with brainstorming every possibility. Once you've thought of a possibility, you have to research and test it. We're often hungry to keep throwing stuff against the wall to see what sticks because we need to know the answer. 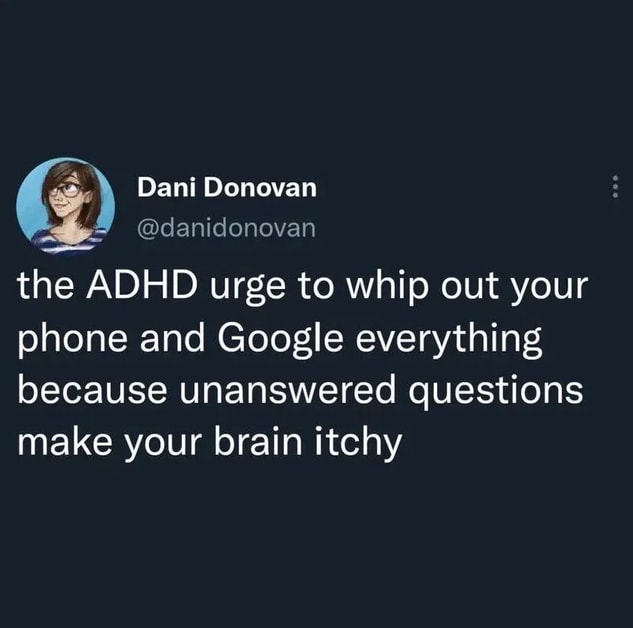 Easy to Reset and Reward

Those with ADHD often experience more intense emotions, but they also experience them much more quickly. Even if we're stuck in rumination about something, an external distraction that grabs our attention can snap us out of it almost immediately. This means we're pretty easily bribed to move on from something that went poorly with new things, which is a common situation in a development role. Work broken up into sprints really suits us because we know some novel work is often just around the corner.

We're also often sensitive to criticism and praise. Many of us struggle with perfectionism. This means you may have to be more delicate with feedback, but we're highly motivated to refactor our code. In general, frequent rewards and praise from a manager are usually highly effective for those with ADHD. In that vein, I strongly recommend any developer keep a brag document, but it can be especially important for those with ADHD.

The response to this series has been overwhelming. I am truly touched by the sheer number of comments rejoicing in feeling less alone. I've also read a lot of comments clinging to decades-old stigma, sometimes in an honest attempt to relate. My response was to try and keep this series helpful for and focused on those with ADHD, and in doing so, I've gotten much further in my own self-acceptance journey. My ardent hope is that if you struggle with ADHD symptoms, this series can help you wherever you are on your journey too.

Did I miss a way that you feel your ADHD has helped you in your coding career? Leave a comment!

Use PostgreSQL the Right Way!

How to Be Productive When You Have Too Much Time