The idea that anyone should be able to sit down and focus for four hours on command is a dangerous myth. Any brain requires glucose to keep your brain going and breaks to keep you engaged. ADHD brains add an extra hurdle when you're trying to focus on a schedule. You'll have to keep pivoting in your strategies. What works today may not work tomorrow and might begin to work again a month from now. 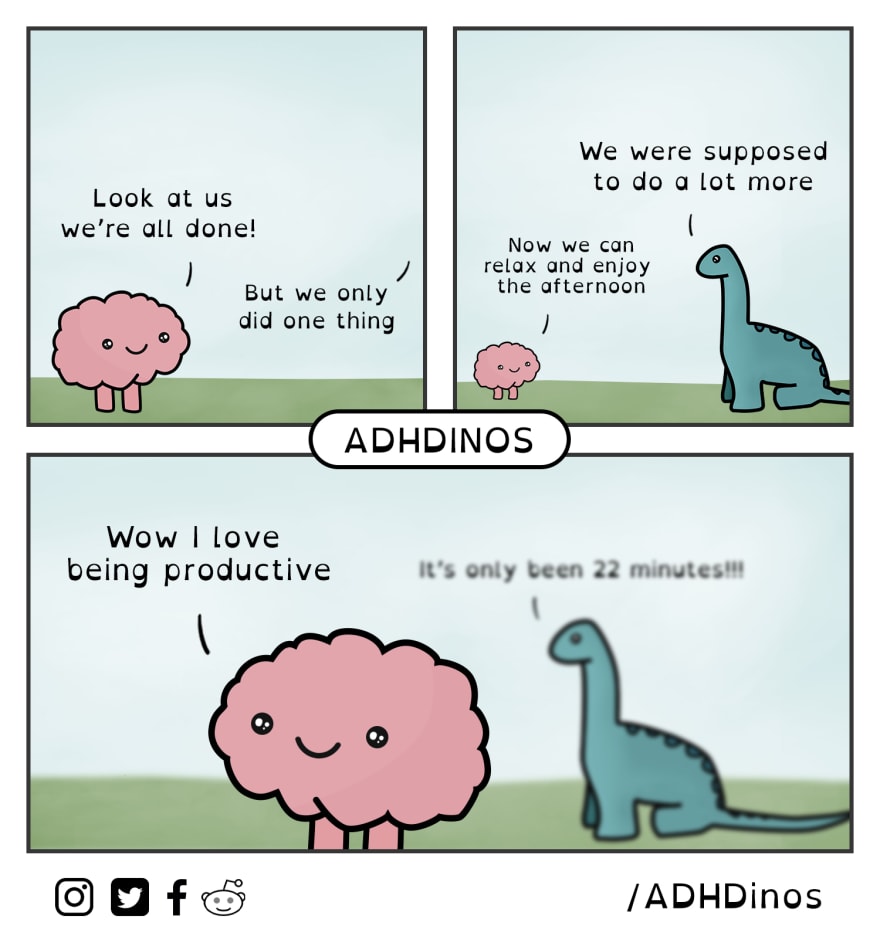 I'm hyperactive, so counterintuitively, my ability to focus often relies on fairly loud background noise I've chosen. For coding, it's usually music (and often lofi beats). For me, this blocks out smaller sounds I might want to investigate and provides a back-up focus for when I get bored. I pick noises that can't sustain my focus for long, so I'll naturally gravitate back towards doing the task. It really helps when I'm waiting for the development server to load, for example.

For the less hyperactive, sustaining focus often involves blocking out all distractions. This can be anything from temperature to lighting to clutter to the clothes you're wearing.

I've heard many people describe putting a note on their office door or desk asking others not to distract them during focus time. Phones and computers often have a focus mode that can limit notifications for a set time.

During classes, presentations, and meetings where blasting music would be rude and I desperately want to move, I take notes, try to come up with questions to ask the presenter, draw, and use fidget toys.

Creating a thought dump can be very helpful. We all know the feeling - I have to act on this thing I remembered NOW or I won't remember it 30 seconds from now. If you have a place to write those thoughts down while you're working, you'll know you can come back to it later.

Working with Your Brain

You can use every trick and tip in the book, but ADHD brains love to change the rules for what will work constantly. If you find patterns in your productivity, use them. For example, my best time for getting work done is like 2:00pm to 5:00pm. Sometimes I can get in the groove when I sit down at 9:00am, but if I can't, I focus on tasks that will set me up for success later. I'll do organizational tasks I've been putting off, check and respond to emails and messages, and sometimes time block the rest of the day. This is another area in which developer jobs can suit ADHD brains. They're often pretty lenient about schedule as long as the work is getting done.

Notice things that regularly provide just enough time for you to get distracted. We're developers, so these are opportunities to automate! In a comment on the last blog, @destynova describes automating alerts when his builds and tests finish, @gwenshap recommends streamlining your CI/CD pipeline, and Josh Comeau recommends chaining npm start and npm install. 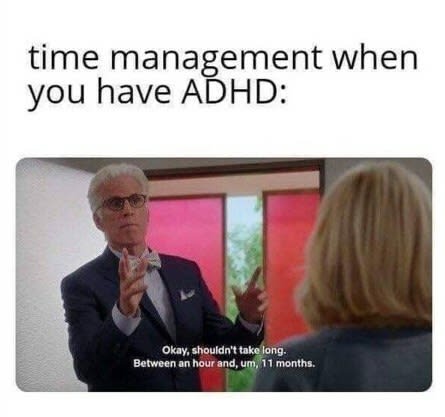 Often for people with ADHD, acknowledging the desire to pivot between tasks is very helpful. If you can't get started on one task on the list, but kinda want to do another, do that one. As long as you're still moving towards the goal, there's no harm in bribing yourself with 10 minutes of the thing you want to do just to get going on the thing you don't want to do. Working with the way your brain focuses will probably work better than trying to force it to focus like someone else's brain would.

Another counterintuitive tip - rewarding yourself at the beginning works way better for ADHD brains than promising yourself a reward at the end. Literally, eat a square of chocolate (or whatever you can bribe yourself with) and then try the thing.

Finally, celebrate that you did the thing! I don't care if the thing isn't done or it isn't done perfectly, congratulate yourself for trying and putting in effort. Anything you can do to give your brain positive feedback will help combat the shame and negative messaging you've received in the past.

Embrace the Lack of Schedule

ADHD people do not form habits like neurotypicals. There's some variation in how long it takes people to form habits, but it's normally somewhere in the months range. I've been trying to cultivate a morning routine for 30 years and at this point I can reliably wash my face and brush my teeth but putting on moisturizer is still hit or miss.

Everything about planning out our day and making sure things get done is manual. I leave calendar notifications on and write down every event I have to attend on my to do list and still end up being late or missing meetings. I've had success asking my teammates to ping me if I'm RSVPed yes to a meeting, but nowhere to be found. Every time I got a ping, that person got a shout out in retrospective. 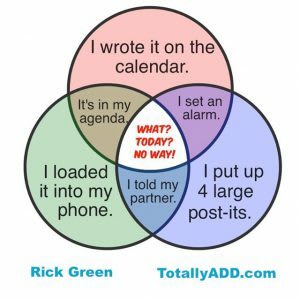 I even have to plan breaks or I will find a way to entertain myself (productively or not) with my computer for several hours. Based on how my brain works, my daily goals are be available during my scheduled work hours, make progress on 1 ticket, 2 - 4 personal to do items like watering the plants, an amount of water to drink, and planned meals and breaks. Nothing else is strictly scheduled, because I will ignore alarms and then declare the task failed because I didn't do it "on time."

The biggest gift I gave myself was accepting that tasks often take me longer than they "should." As long as they're getting done, that's something to celebrate!

It's tempting to expect yourself to be able to accomplish the same amount every day. ADHD brains naturally have an ebb and flow. One day I'll be in a shame spiral about my inability to start a ticket, and the next day I'll get 3 days worth of tickets done. However, that really productive day will take its toll. If I manage to chain really productive days together, I'll often crash and have an equal or larger number of unproductive days. 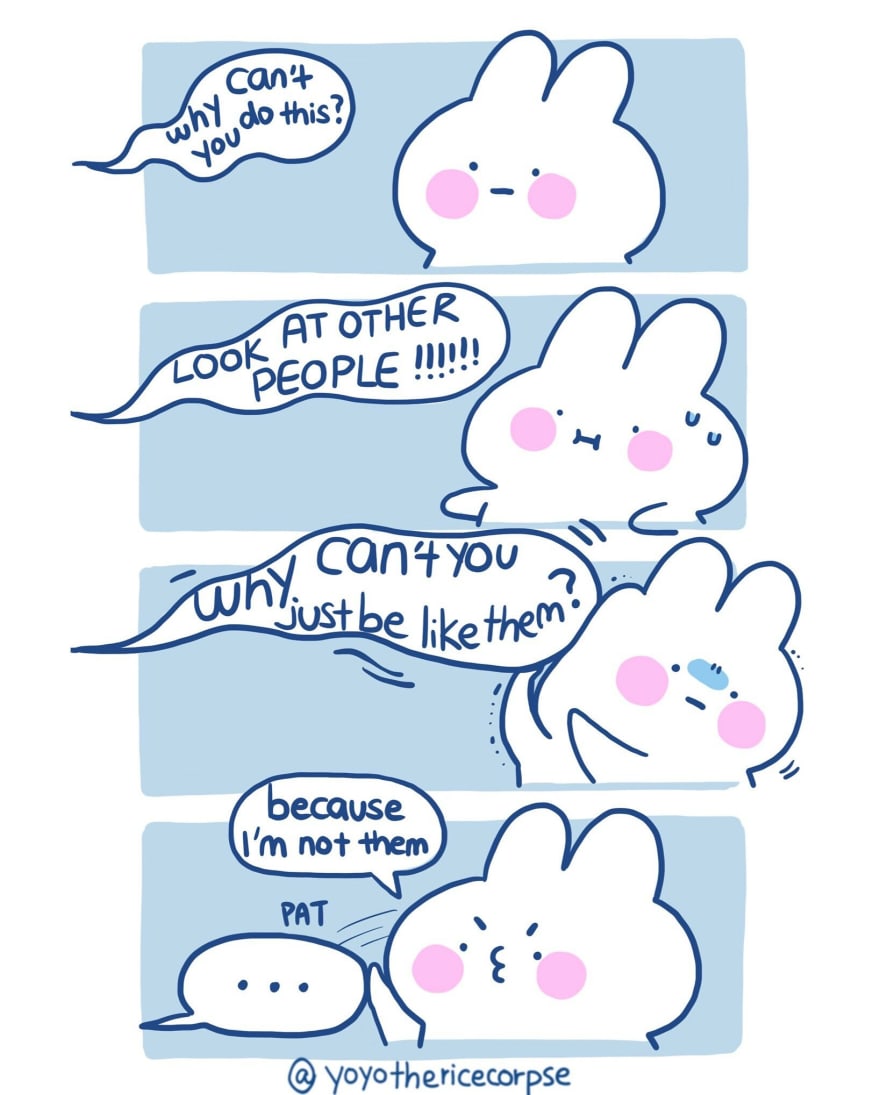 If I start to feel exhausted, frustrated, or overwhelmed, I have to remind myself to try eating food or taking a 10 minute walk. Often that is enough to get me back on track. If not, I ask myself if I'm trying to multi-task again or re-evaluate my plan for the day and take some items off.

Ultimately, this is another area in which people with ADHD struggle to separate themselves from the constant negative messaging they get about their productivity from society. I'm still trying to internalize that I do not need to be productive to earn rest.

Did I miss a resource or tip you love? Interested in fidget toy reviews? Leave a comment!

How to Use Push Method In React Hooks?