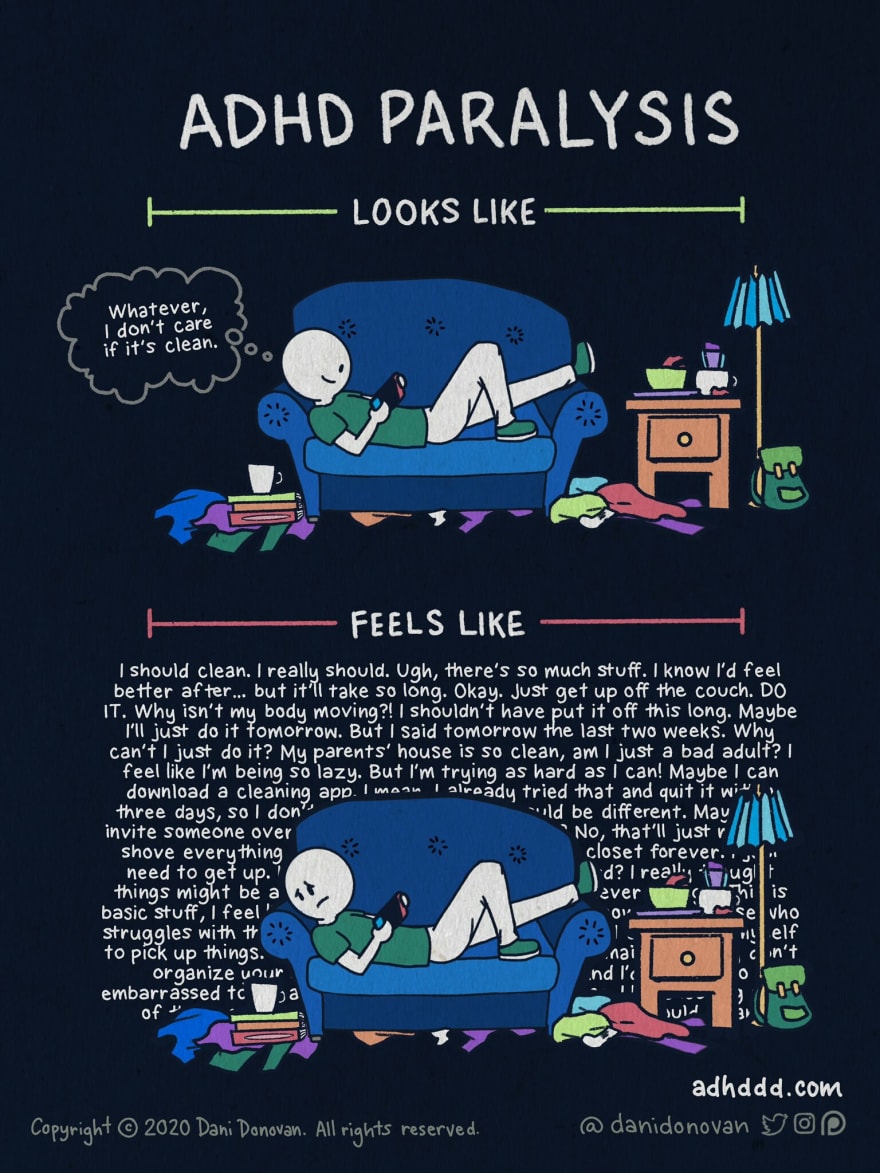 ADHD brains have received so much negative messaging about their ability to do tasks, that inability to start is often rooted in shame. Many of us struggle with perfectionism, and no one enjoys trying and failing at the same task repeatedly.

I highly recommend How to ADHD and Brendan Mahan's Wall of Awful explanation part 1 and part 2. A short book I found very helpful is How to Keep House While Drowning. Jesse J. Anderson also does a great job of explaining how ADHD brains are motivated and some tools to use in this video. Black Girl Lost Keys has tons of helpful resources. I tweet about my ADHD and follow many people who tweet about their ADHD because it is very helpful to know other people are struggling with these things too.

ADHD people often find pairing/co-working/body doubling helpful, especially for starting a task. I have to find a balance because I will chat someone's ear off given the opportunity, to the detriment of getting my work done.

Throughout my life, the main thing that has worked for me when I encounter a large task I don't want to start is writing down all the steps. Often I find I'm overwhelmed by something because I'm thinking of it as one step when it's actually 20.

Next I break each of those steps down into its smallest steps. Then I find the smallest step in that list and try it. For code, sometimes this is as easy as making a blank file and importing something. Once I've done it, my brain declares the task started, and suddenly things are much less overwhelming.

This can be very difficult for people with ADHD, so never be afraid to ask for help breaking it down. This can be one area in which development work suits people with ADHD. It is normal to discuss the individual steps involved in a task in order to properly estimate and prioritize them. There is often a person whose job it is to help you do so, and if not, it could be a great thing to pair with another developer on. If there's not a developer like that within your company, you can ask a friend or join a networking group. 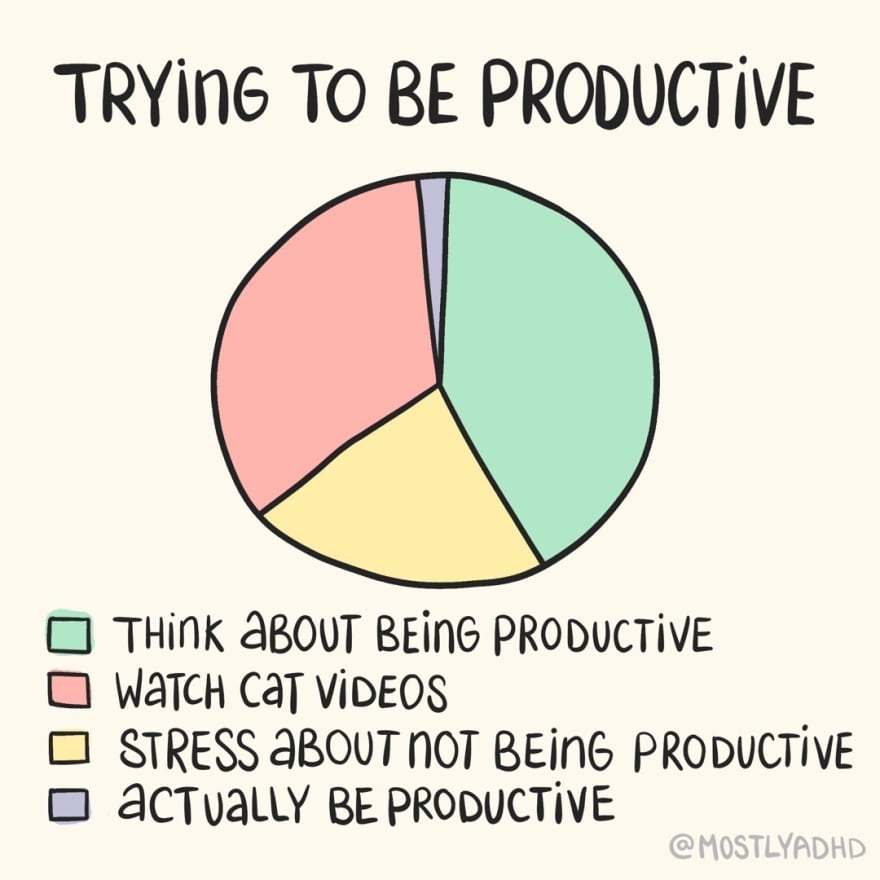 Something I've learned recently is that committing to an amount of time trying the task or a small percent of the task really works for ADHD brains. "I'll do 15 minutes of dishes." or "I'll just do 5% of this refactor" is often enough to get us started. Once that 5% is complete, that momentum often gives enough motivation to start another 5% and so on.

At the end of the work day, I'll often ask myself if there are small tasks I can do right now to make it easier to start in the morning. For me, this is usually making sure my to do list for tomorrow has the first task I want to try in the morning and all my meetings/appointments/events on it. Sometimes it's picking up desk clutter to limit distractions or writing myself an encouraging note on a post it.

Before I sit on the couch to relax, I try to ask myself what small task I can do to help myself function tomorrow. For example, do I have breakfast I can prep in 3 steps or less? If not, I should prep some. I'm trying to find the smallest task I can do while I have some momentum, instead of hoping I have the motivation in the morning.

Did I miss a resource or tip you love? Leave a comment!

Ok then let me rephrase: there is no magic bullet for ADHD. ADHD people have to switch up their coping strategies as what works one day often does not work the next.

Brain disorders are complex and difficult to study, because the experience is subjective.

This is a conversation I have a lot. For perspective, if we compare psychiatry to medicine, it's still in the "your humors seem out of balance" phase. That being said, there have been scientific studies showing physical differences in ADHD brains. It would be more accurate to call it an executive function disorder. It is a cognitive disability. Like most disorders, it's still not researched enough, the research often has heavy biases, and the amount nature and nurture determine symptoms is still debated.

The brain is constantly not storing and erasing/changing stored information - memory is much more fallible than people think. Neural pathways can also easily be damaged physically through disease, injury, and substances. If you're talking about the fact that neural pathways are hard to change through behavior, then yes. Reward pathways are especially stubborn, which is important for both ADHD and substance abuse. However, ADHD reward pathways work very differently - to the point that forming habits takes years and the rewards we require look very different. That Jesse J. Anderson video also covers the difference in rewards we need.

Yes, if you add dopamine to the system of someone with ADHD, it will help them do the task. Any suggestion involving "just do it," "just do it a little every day," "just force yourself," "make it a habit," or "willpower" is still dismissive to say to someone with ADHD. I could not force myself to get in a tub full of ice every morning even with my Adderall. I wouldn't have the ice ready every morning, for sure.

Cool. To anyone with ADHD reading this - it's not in your head. There are real statistics from real statisticians. I tried the "just force yourself" way for 28 years, and the result was burn out and pain, not productivity. Accepting my brain and tackling the shame has been more helpful to me than any productivity tip from someone who doesn't struggle with ADHD.

Psychiatric medications, side effects, and the research on them are another topic. Don't listen to anyone trying to shame you for taking your meds. Do discuss side effects and the effects of long term use with your doctor.

How I am bringing OSS contributing to Twitch, taking everyone with me and more...