For this deployment we'll be describing how to setup Greengrass Core on a Raspberry Pi. This post is an extension of a larger series called Greener Grass, and once these steps have been completed please refer back to that guide to continue your learning.

Start of by downloading the Rasbian lite image. This can be done using wget if you are that way inclined.

Next we need to burn the image with Etcher or a similar imaging software. 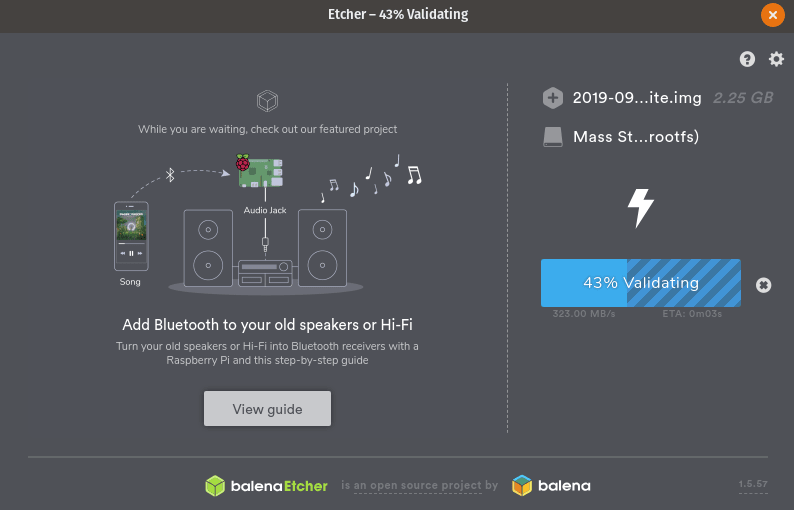 Once the MicroSD card is flashed with Rasbian continue to the next step.

Setting up WiFi and SSH access in a headless fashion is really useful if you haven't got a monitor around. It's already very convenient for bulk deployments.

This might be different based on your OS, the general idea is that you will need to create:

NOTE: Be sure to update your WiFi networking information. If you are using Ethernet you can skip the wpa_supplicant.conf step.

Plugin the Raspberry Pi and give it a couple minutes to first boot up. You can then SSH into your raspberry pi by either using Putty on Windows or ssh on MacOS & Unix

Once connected, we update the system with the latest packages and install Python Pip for later use with the Greengrass SDK.

Now we need to perform a set of steps that are best described in the official AWS setup guide for the Raspberry Pi These steps are highly recommended if you want to ensure you don't run into problems later down the track when running Greengrass Core.

Start off by adding a new system user and group that Greengrass will use when executing. This helps separate the permissions away from our default user.

Next we can enable hardlink and softlink (symlink) protection by editing 98-rpi.conf.

Add the following lines to the file:

Reboot the pi, and when logged back in confirm the settings were set

Edit your command line /boot/cmdline.txt file to enable and mount memory cgroups. Append the following to the single line

Finally reboot the Pi again to confirm everything comes up okay.

To confirm that all prerequisites are fulfilled we'll use the Greengrass Dependency Checker. Run the following commands from the home directory of the Raspberry Pi we SSH'd into.

There will likely be a couple warnings when running:

These are safe to ignore for now, the first warning should be kept in mind however as we'll resolve it later.

Depending on what version your raspberry pi is will determine what version we'll need. Run the following command to get your architecture.

Now that we have the files we need, copy them all to the Raspberry Pi

Confirm everything copied across correctly by running the following

The Raspberry Pi is now setup and configured with Greengrass and ready for certificates to authenticate it with AWS IoT. For information on how to do this, please return to the previous post:

⭐ AWS IoT/Community Hero, Writer of YAML, Builder of the Weird.

Hit the 6MB Lambda payload limit? Here’s what you can do.

How to set a static IP address on a Raspberry Pi

What are services offered better by AWS?

Trending on DEV
Tell Me The Question You HATED The Most During a Job Interview
#discuss #career #jobs
[0/15] How about 15 weeks of code?
#100daysofcode #aws #node
What was your win this week?
#discuss #weeklyretro
I made a $500 mistake but you don't have to.
#aws #tutorial
5 Things I Learned from The DynamoDB Book
#books #dynamodb #aws #database
Why and how I built a platform to help developers find remote jobs.
#showdev #remote #career #webdev
Data extraction from documents made easy with Amazon Textract
#machinelearning #tutorial #aws #AI
What I wish, as a woman in tech, I knew early on?
#career #womenintech #motivation #developer