This is part of a series of Leetcode solution explanations (index). If you liked this solution or found it useful, please like this post and/or upvote my solution post on Leetcode's forums.

Note: This is my second version of a solution for this problem. Due to the constraints listed for this problem, the first version is the more performant solution, but the nature of this problem really calls for a trie solution, so I've included a breakdown of the trie approach here, as well.

A valid encoding of an array of words is any reference string s and array of indices indices such that:

Given an array of words, return the length of the shortest reference string s possible of any valid encoding of words.

So a simple encoding of the input would be to add the '#' marker to the end of each word and then join them in a string. Per the instructions, this encoding can be made shorter if you can combine two or more words into one encoded word. In order to do this, the smaller word would have to be not just a substring of the larger word, but the rightmost substring, or its suffix.

A naive solution here would be to compare each word to each other word and examine if the larger word has the smaller word as its suffix, but with a range of up to 2000 words, that would mean almost 4 million potential combinations.

But if we're asked to check for matching suffixes, we might also be thinking of a trie solution. A trie is a tree data structure in which you define branches of prefix (or in this case suffix) data. In this way, entries that share the same prefix will be grouped together and easy to identify.

When you build out a trie, you iterate through the granular segments of the data and go down existing branches of the trie when they exist and create them when they don't. For this problem, the entries are words and thus the granular segments are characters. We'll also be iterating through the characters in reverse order, since we're dealing with suffixes instead of prefixes. 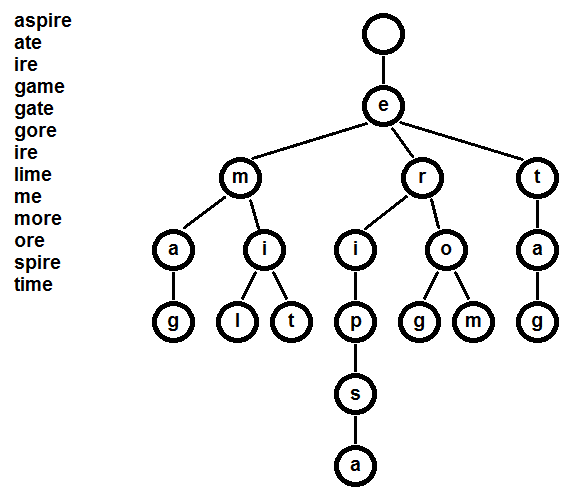 As we build out our trie, there are three things we have to look out for:

The third check in particular will allow us to avoid needing to sort W before entry. In order to prevent the third check from triggering every time a word extends into new territory (which would happen with each new character), we can use a boolean flag (newWord) to mark only the first instance.

Javascript and Python are a little more straightforward in their implementation of the trie. They can use a more simple map structure to good use.

For Java and C++, however, we'll want to use a class structure for our trie, but rather than use data structures with more overhead, we can improve efficiency by simplifying each node to an array of 26 elements, with each index corresponding to a character.

The one additional problem we face when converting from a map-type object to an ordered array is that we no longer have an easy way to tell whether or not the array is fully empty. To get around this, we can just add an isEmpty boolean flag to our TrieNode class.

What is "Pythonic" coding?

Once suspended, seanpgallivan will not be able to comment or publish posts until their suspension is removed.

Once unsuspended, seanpgallivan will be able to comment and publish posts again.

Once unpublished, all posts by seanpgallivan will become hidden and only accessible to themselves.

If seanpgallivan is not suspended, they can still re-publish their posts from their dashboard.

Once unpublished, this post will become invisible to the public and only accessible to seanpgallivan.

Thanks for keeping DEV Community safe. Here is what you can do to flag seanpgallivan:

Unflagging seanpgallivan will restore default visibility to their posts.