Testing our code brings in a variety of benefits, including building confidence in the code’s functioning and having lesser regressions.

Writing and maintaining tests requires some additional work, and that is why we want to leverage tools as much as we can.

Python does provide inbuilt tools such as unittest for supporting testing, but it involves writing a lot of boilerplate code. It also has a limited ability to reuse components (or fixtures in PyTest). Therefore we will be testing Python applications using Pytest instead of other tools. Pytest is the most popular tool among other alternatives as well.

(We will be using Python 3 in this tutorial.)

Pytest is one of the most popular libraries dedicated to unit and functional testing. But what makes it so popular?

Pytest is a dependency that we will need to add to our project. As we know from our previous post on managing python virtual environments, we always want to be working in one.

And then, we will install Pytest.

And this will enable the pytest command in our installation environment. This completes our first step in testing Python applications using Pytest. Let us move on to the next step.

As with any test framework, Pytest has a few places that it automatically looks for test files.

The file name should start with “test” or end with “_test.py”.

The test functions that are defined should start with “test_”. Methods that do not follow this convention do not get executed. To see which tests will get executed without running them, we can use:

And to execute all tests in our pytest-demo directory, we can run:

If we do not specify the directory, Pytest will run in the current directory by default. Or we can specify individual files if we want to do that.

Or if we want to ignore a directory (such as the virtual environment), we can use:

Now that we know the basics, let us set up the code that we will be testing. We can use a complex code block and write multiple test cases around it, but this post is more around Pytest than writing test cases. So we will stick to a simple addition and subtraction problem.

Now that we have our minimal piece of code, we can start with our basic test. We will be doing a calculation of 2+1 = 3. For this, we will define our test as:

The assert keyword compares the two values it gets and returns True or False based on their equality. We can also have detailed assertions, which can be helpful in debugging. They can be written as:

Detailed assertions can be useful for debugging purposes.

And we can run our test using the command:

And we have our first successful running test! 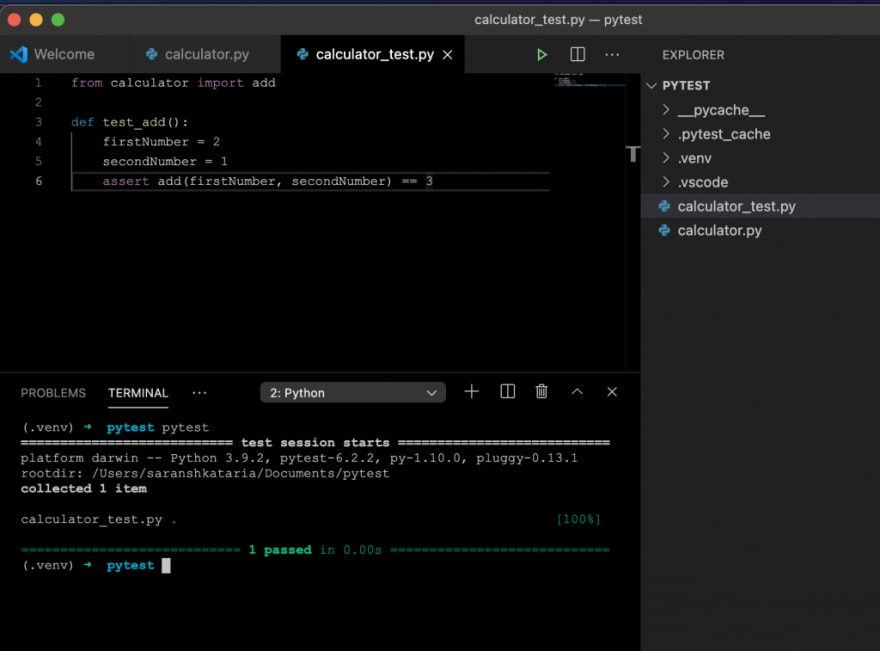 Similarly, we can write a test for our subtract method as well.

We can pass in a parameter while running the tests to increase/decrease the verbosity of the output generated by Pytest. The following options are available:

And that is a quick introduction to testing python applications using Pytest. We will cover fixtures and parameterized functions in our next post. Until then, if you have any questions, drop a comment below, and we would be happy to help you out!

Originally published at https://www.wisdomgeek.com on March 9, 2021.

How I Practiced CSS Flexbox