That project started with what may seem like a reasonable question ...

How much would it cost to migrate our MS SQL databases to Azure CosmosDB?

From MS SQL to CosmosDB

It wasn't the first project where we suspected the initial question was wrong. We had to step back to understand the nature of the problem before suggesting any solution.

That didn't look like CosmosDB material to us, not from a database migration point of view. It would have to be a completely new implementation for the system to work with CosmosDB.

A new implementation was out of the question.

From on-prem MS SQL to the cloud

The main objective of the project was to migrate the system to the cloud because the monolithic on-prem architecture held back business development and meeting new customer needs. CosmosDB was just one of the technology options under consideration. Our task was to help the client consider alternatives and choose the most appropriate solution.

Objectives for migrating to Azure

Quite often, cloud-migration projects are assessed for feasibility and upfront costs. The running cost is ignored until the resources are fully deployed and the monthly bills start coming in. It could be particularly troublesome when CosmosDB is seen as an "SQL DB". It does support a subset of SQL, but it is not an RDBMS and anything other than a simple read/write by a primary key will come at a high monetary cost.

Knowing the size and utilization of the current resources helps with understanding what kind of cloud resources would match the current performance level and how the system can be scaled horizontally or vertically within Azure.

The server utilisation graph below is based on Windows System Monitor logs.

A representative sample of performance data was collected over several days. A combination of performance logs and hardware configuration can be used as a reliable guide to server sizing.

One of the biggest challenges in migrating relational databases to a different environment or a different technology stack is the SQL code inside the databases and their client applications. Although, there is such a thing as SQL Standard, T-SQL used by MS SQL server is not directly portable to other SQL flavors.

The complexity of the code in any given database can be estimated by looking up system views like sys.objects and sys.comments. Some metrics of interest:

This query counts the number of user objects across all databases on the server:

This query counts the number of lines of code per object type:

Results for a single customer databases on Server I

All customer DBs were expected to share the same schema and SQL codebase, so we only included one customer database in our estimates.

Combined results for all shared databases on Server II

A global text search through C# code in client apps interfacing with the databases returned only a few simple select statements. Most of the database calls were done via stored procedures shifting the migration effort to the T-SQL code within the databases.

The same exercise was repeated with the T-SQL code inside databases. We looked for cursor, transaction, freetext, for xml and .query as they are the ones to most likely cause compatibility issues.

Automated code refactoring could be an option for migrating between platforms, but due to the obvious complexity of the T-SQL code (389,185 lines over 4,340 objects) the amount of manual refactoring would still be significant.

The presence of 391 cursors in the T-SQL code indicates there is room for performance improvement. T-SQL cursors are potential performance hogs and would have to be reviewed manually for any inefficiencies.

We considered only the most popular SQL and NoSQL DBMS packaged as fully managed Azure services.

This section looks into more detail of each of the options listed in the table above.

CosmosDB is a no-schema DB with auto-indexing and SQL-like query language. It is a key-value store for JSON documents, not an RDBMS. CosmosDB is too different from MS SQL server for direct migration and will require a complete redesign and re-write of all DB-related codebase and the client apps.

The primary purpose of CosmosDB and similar NoSQL DBs is horizontal scaling for large or unpredictable workloads. Our load is small enough for even a modest SQL server to handle and is very predictable.

Let's assume it takes a very optimistic 1 minute to re-write and re-test one line of existing SQL code. 380,000 lines of code would take 6,300 man-hrs or 787 days. Most likely it will be x4 of that because of the programming paradigm change.
CosmosDB will be forced to act as an SQL server, which it is not. This would be a costly dead-end solution that takes a very long time to implement.

The cost of migrating 380,000+ lines of code to a different SQL flavor with fewer features is likely to be high. The running cost is about the same as the normal cost for Azure compute + storage.

It would take a complete redesign and re-write of all DB-related codebase to make it work with a No-SQL database. Even then, a small RDBMS with ACID support is likely to be required. No-SQL products will need significantly more compute and storage to provide comparable performance.

Migrating an on-prem MS SQL server to an Azure MS SQL server is a reasonably straightforward process as they are only slightly different flavors of the same RDBMS technology. 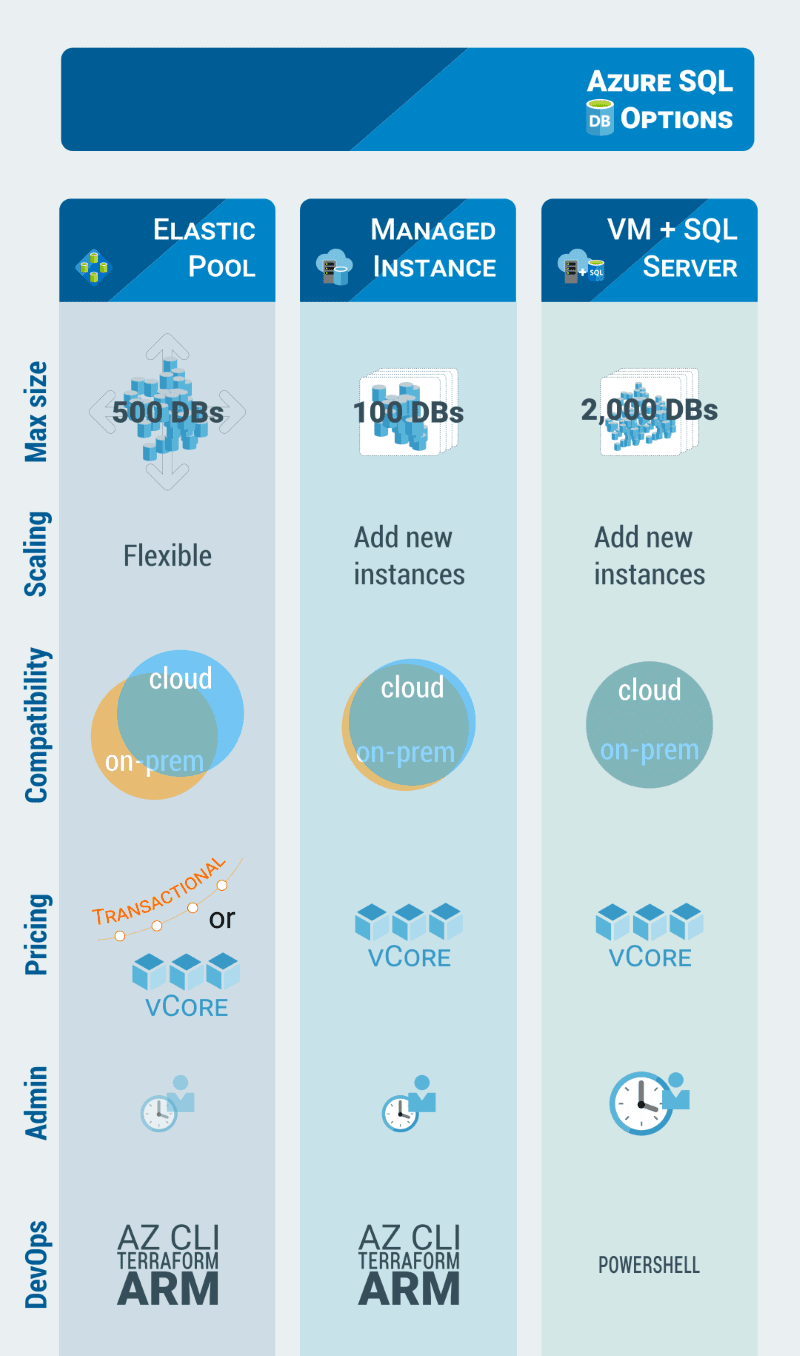 Elastic DB pool and Managed SQL may require some changes to the T-SQL code. The changes are not technically challenging, but there may be many thousands of lines to refactor:

The pricing below is "per month" in West Europe availability zone. The server sizing is approximate and would have to be re-calculated more accurately using SQL server sizing calculator.

PgSQL is comparable in scale and performance to MS SQL. Its main advantage is its lower running cost because it is a free open source product. PgSQL lower running cost is the only reason to consider it for this project. Azure offers managed PostgreSQL at the price of "compute + storage", which is approximately ½ of MS SQL cost.

The server sizing in the table below is very approximate and was included to illustrate the price range. 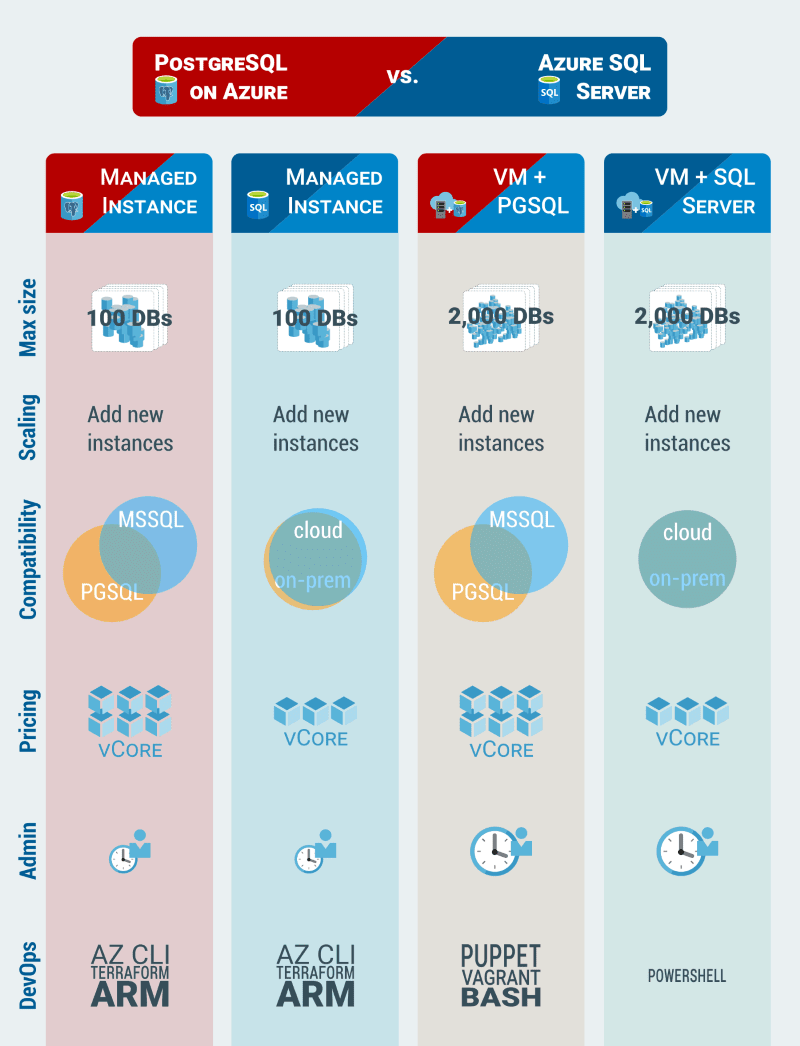 PostgreSQL comes with an additional cost of the initial migration. It can take anywhere between 2 - 6 months:

The in-house team would have to upskill during the migration. Most MS SQL developers can start programming for PostgreSQL within hours of setting it up. Mastering Postgres administration may take longer, but most of the concepts are very similar to MS SQL.

The only viable migration option that meets our time and budget constraints is Azure SQL. It is the closest in terms of technology and requires the least change compared to all the other options. Azure SQL has three different types of MS SQL products:

Further investigation is required to choose the right Azure SQL product and estimate its cost.