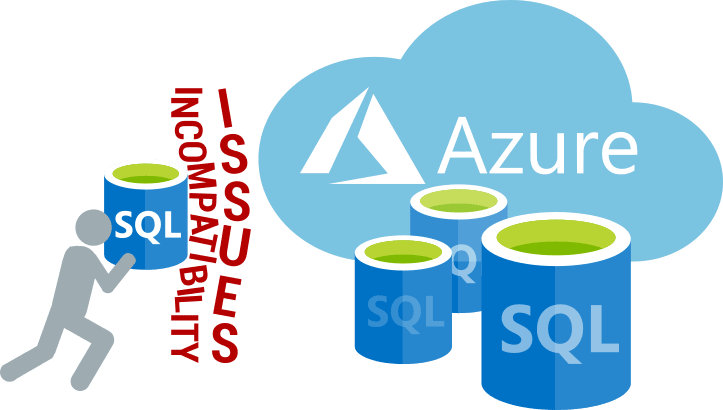 In theory, Azure SQL is a cloud version of MS SQL server and migrating from one the the other is a straightforward process. In practice, there are numerous limitations and incompatibilities between the two.

The quickest and easiest way of assessing the compatibility of your MS SQL DB with Azure SQL is to use Database Migration Assistant (DMA) tool by Microsoft. It can connect to your database and produce a detailed report within minutes.

DMA is good at providing an overview of compatibility issues, but the UI doesn't make it easy to look deeper into the details of individual issues. The only other viewing option is a JSON report file that is not easy to parse.

Using SqlPackage as a DMA alternative

SqlPackage utility was written in .Net and can be run on Win, Mac and Linux with a single command:

At first glance, the output of SqlPackage may look like gibberish. There are definitely many compatibility issues in this example, but the format of the output is not any more useful than with the DMA tool. 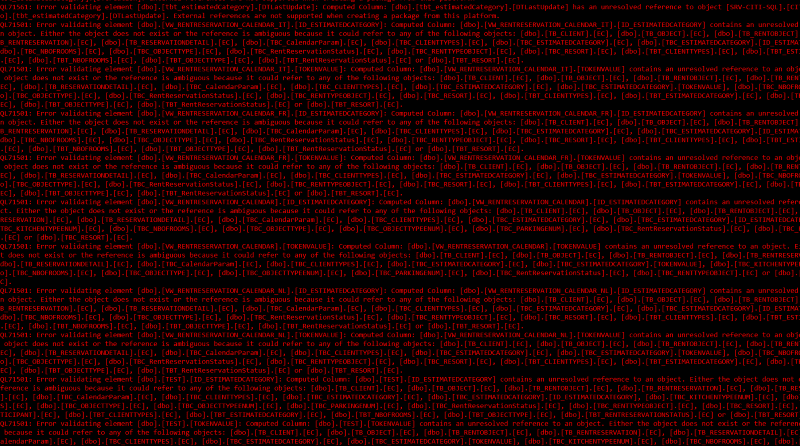 Viewing the output in a text editor like Notepad++ makes it a bit clearer, but not clear enough to make sense of it. In my case, I stood little chance of getting any useful info from 25,000 lines of very dense and repetitive error messages. 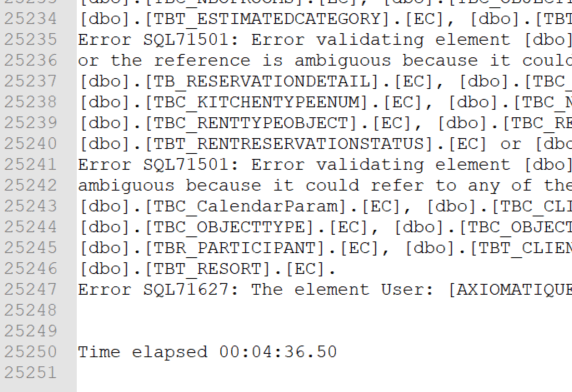 Unfortunately, SqlPackage tool has a problem with large error reports. They come out with broken lines and are hard to parse. There is a simple way to fix the problem in a text editor:

Your document should have one error message per line after the replacement. For example, my 25,000 lines shrunk to "just" 11,673 lines of very repetitive error messages.

My key questions for estimating the extent of incompatibilities were:

Q1: What objects are affected?

into a relatively clean list of affected object names

Q2: What are the common issues?

I used a very "unscientific" method of scrolling up and down the report and running keyword searches to identify commonalities in the issues. A clear pattern emerged within a few minutes:

The references to non-existent columns and functions may sound strange, but there is a high chance that schema changes have accumulated over the lifetime of the system. MS SQL allows objects to be dropped without checking their dependents, unless WITH SCHEMA BINDING option was specified.

Identifying objects with broken references is actually good news. If we know that a certain object has been broken in production for a long time and no one complained, it is probably no longer used and can be marked for deletion.

Q3: What code can be refactored automatically?

That question is difficult to answer by looking at the list of issues alone. Some familiarity with the source code is required.

The difficulty of estimating refactoring is that 500 identical code changes can usually be fixed within minutes with global search-and-replace while a small number of unique issues may take days of work. Removing the repeating errors identified in the previous step from the report will leave only less common problems for further investigation.

Remember to include testing, staging and DevOps changes into your estimate. A shortcut for that can be to quadruple the initial estimate.

In short, both tools are complimentary of each other and I recommend using both.

Watch out for deprecated data types

DMA puts deprecated data types like text, ntext and image into warnings section. You can still migrate those to AZ as-is, but expect some of the code to fail where those types are involved. We had to completely eliminate them from all our parameters in functions and procedures. Text became nvarchar(max) and image became varbinary(max).

How to Program iOS on iOS

Query PostgreSQL, or any 🐘-compatible like Amazon Redshift, from YugabyteDB 🚀 thanks to Postgres FDW