In our current DevOps/Cloud world, we have a lot of powerful tools to deploy and expose our services to the world. But using a powerful without a proper way to use it, it can be a big loss (money, time...) for your team/enterprise.

So here are some Deployment strategies to help you to improve your deployments and/or capitalize on your tools.

What is a Deployment strategy ?

A "deployment strategy" is a part of a pipeline where you define how you will deploy your applications/services.

You can have a simple deployment pipeline, where the strategy is for the whole pipeline.

But you can have a more complex pipeline (like a CD [1] one) where the strategy concerns only a part of it.

The recreate strategy is the simplest one and the less cost effective.

As evoked in the name, this strategy is composed with 2 steps

This strategy will update progressively all the instances of an application with the new version.

Simple and clear following its name, this strategy is to support multiple versions of your application in production. 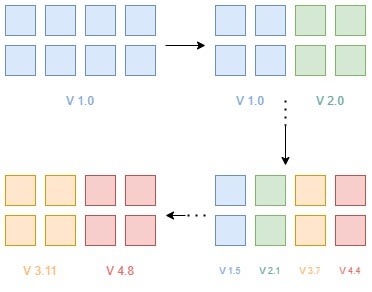 This strategy can be really useful in a breaking change case. But as explained, you can have some surprises.

So if you will use it, be aware of the cons and prepare a clear strategy to avoid to have 45 breaking changes a year and support 10 versions simultaniously. With these elements in mind, it should be ok.

This strategy is based on 2 production environments:

When your staging environment is ready for the production (after quality testing), you have to shift the traffic between the two environments.

If everything is OK on the staging environment, you can completly switch the traffic to this environment, which will become the new "live" environment.

If you have some issues, switch back all the traffic to the current version of the service.

This strategy is to migrate progressively your users to the new version.

You will replace some of your current instances by the new version, and you will shift some of the traffic on it. Then you can check if everything is right for this group on the new version.

If yes, you can grow the percentage of user using the new version and continue to replace the instances with the "old" version until all the instances are updated.

If no, you can easily rollback to the "old" version. 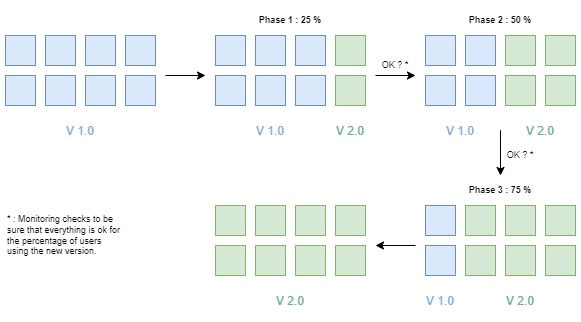 The A/B resting is a strategy technically similar to the Canary strategy. You will deploy a new version on a limited number of instances and shift some traffic on it.

But, here the objective is to more to do some experimentations on multiples ideas and see which one works well.

I think it's a good deployment for frontend applications to see if the users are not bored or don't quit in a middle of the sequence to find/do something.

What is the best strategy?

There's no best strategy for each deployment. They all have their pros and cons.

So how to choose one?

It will depend of several points. So be sure to take a look of the following points and ask you "depending of my answers, what does fit the most ?".

With my experience, I saw that you won't have only one deployment strategy for a project. There is no magic. You won't manage the same way a version with and without a breaking change.

To conclude, don't be afraid to do some tests on your non production environment or change your strategy even if you're already in production.

Especially in IT, we don't know if something will do the job for the next 5-10 years. All these solutions can work for a long time, but maybe a new tool/strategy will have a best fit with your context, or your context can evolve!

So don't engrave your choice in the stone and live with your solution, be aware of all the pros/cons of each and everything should be alright!

Other posts about Deployment Strategies