Now that we have the code ready, it's time to get GitHub Actions to deploy it. Suure I could deploy by hand, but what's the fun in that? The Commit I made that completes this task is at aacc80d

Before I do anything, I'm first going to manually deploy the function. I need to do this due to a recommendation that Google Cloud have of not allowing CI to enable "public unauthorized" triggering of the function. This is a security consideration, however in our case we do need to enable it, and this should only be done through a manual deploy.

So I prepare a deploy script containing the commands needed to do that:

After running this (with appropriate service account set up in the env var, see my next post), this deploys the google cloud function.

In a more normal python deployment, we'd only need pipenv to manage our dependencies, however, Google Cloud Functions doesn't/can't use pipenv, and must install from a requirements.txt so we generate one based on the Pipenv. The requirements.txt file has actually been gitignored in case and old one is checked in by accident. We'll re-created this file from the canonical lockfile each time instead.

Github's actions works by including yaml files into a folder called .github/workflows. I will be adding a new workflow for each microservice. I'll break down the workflow I wrote (see above commit link) step by step, the file is here.

This line describes to GitHub the human-readable name of the workflow, which it uses to create the Workflows menu.

The next chunk of YAML describes under what condition the workflow will run. In my case, I want it run on pushes to the main branch only for changes to the github_webhook_listener folder. And similarly pull_requests involving the same. The intention here is to run the tests during pull_requests, and run the deployment during merges into main.

This big chunk is the test job, which runs the tests that I showed in the last post. The steps look like this:

This block deals with deploying the function to Firebase. The top matter of this block states that it needs: test, so the test must succeed before this step will run. It also requires that the event name be "push", this prevents deploying due to a PR (we only want tests to run) and will only deploy once code is merged into the main branch. Finally, environment: Prod tells GitHub to pull the secrets out of the Prod environment (which groups secrets together).

The steps in this job are:

The result of the CI script, when making a Pull Request, the GitHub Actions will be triggered, and you'll see a block like this in the PR saying that checks are running. If the tests error out, they will fail and there would be a message here, and I can turn on enforcing that checks pass before allowing a merge. 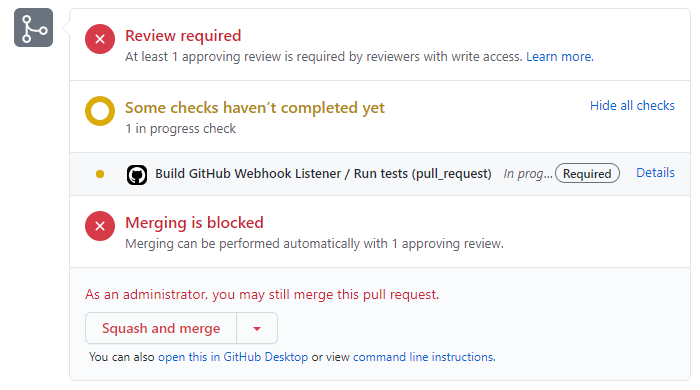 The coverage results also get posted into a comment. This is useful as a metric to decide whether to accept a Pull Request or not, or whether more tests need to be written, or particular lines to focus on in the code. 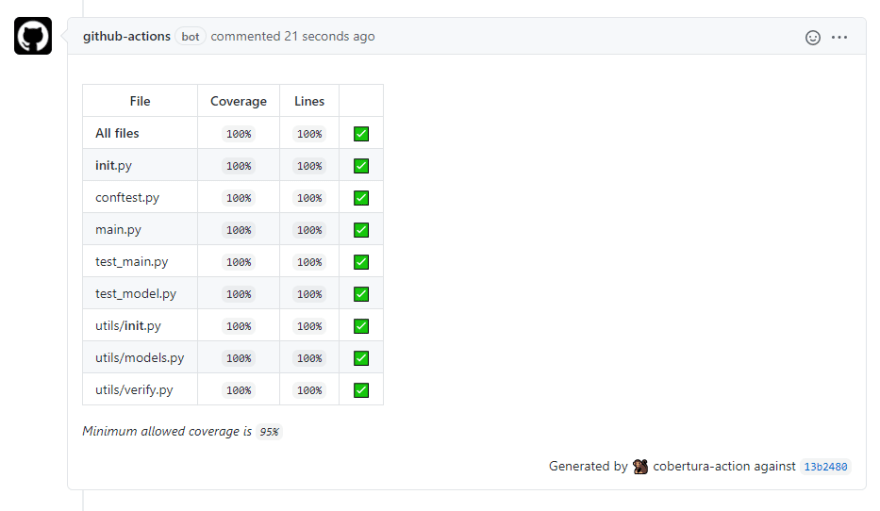 And you get a nice little green tick against your PR when the tests complete.

The running action can be viewed in the Actions section of the repo, this is what it looks like while running. Any errors in the run (due to mistakes in the CI scripts, or otherwise) would appear in here. 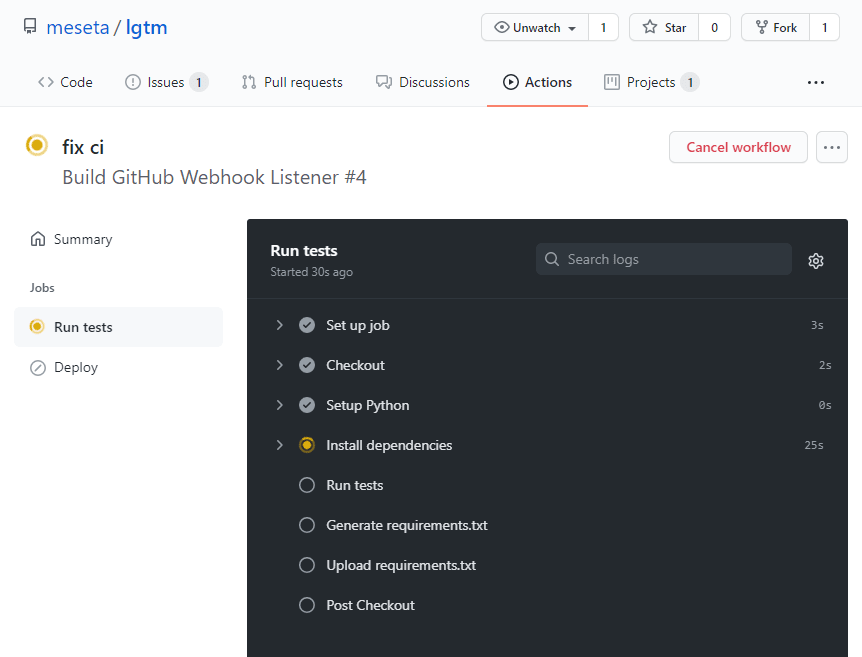 And this is what it looks like when complete. 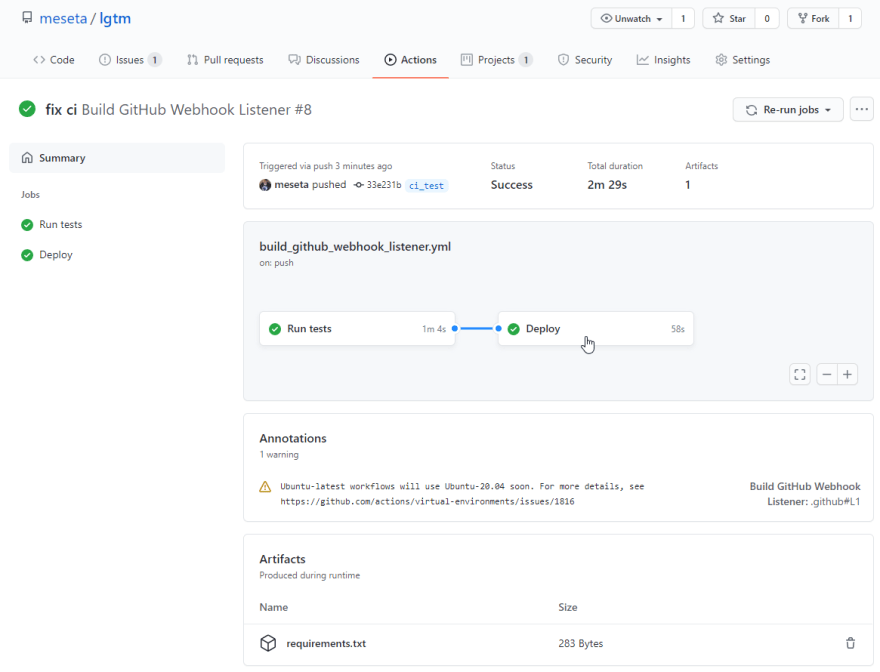 Finally, now that the function is properly deployed, we can do a real test. I simply go over to the GitHub webhooks, update the URL to the real one, and tell it to re-send one of the previously received values.

Then over in the Cloud Functions logs, I can see the log message from a successful run! 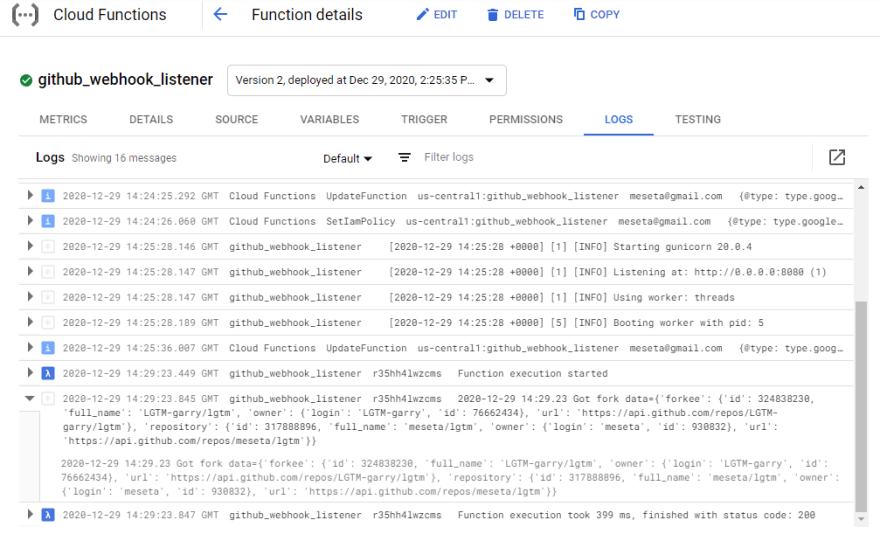 How To Remove The Uncommitted Changes in Git