My pet project, which I named Visualizer and that I use to learn more about Redis, can start ingesting tweets from Twitter’s volume stream or from their filtered stream.

While it is doing so, Visualizer can produce a live stream of all the hashtags that are currently encountered in the ingested tweets and it ranks them too.

In this post I want to go over those parts of the system that handle new tweets, extract and publish the ranked hashtags and finally push them to the frontend to create that nice word cloud.

If you just want to see the code, here’s the GitHub link for the backend and here’s the link to the frontend. Btw. this is my third post on using Redis, so make sure to read the others too.

Visualizer is made up of three components. 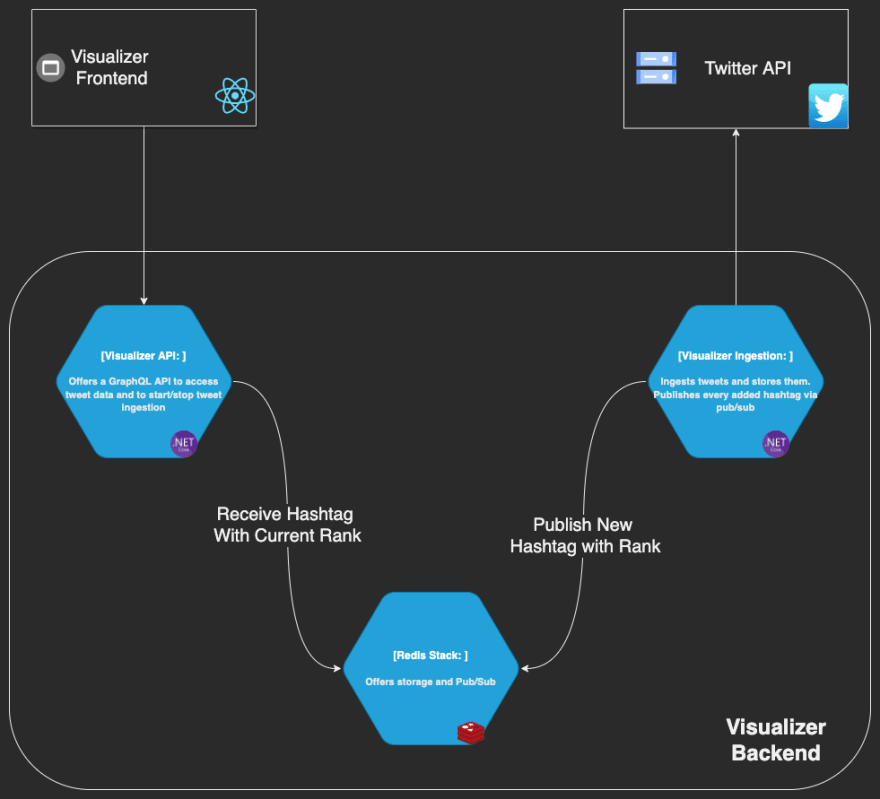 Visualizer Ingestion — An ASP.NET Core 6 service that handles the stream of tweets and stores them in Redis as indexed documents (in JSON format). It also publishes each encountered hashtag together with its rank, i.e. a count of how many times it was ever encountered by Visualizer.

In a future post I’ll talk more about my reasons for this architecture, so follow me no to miss it.

As I mentioned, Visualizer Ingestion gets tweets from Twitter’s API v2 and besides persisting them it also publishes any encountered hashtag together with its rank.

The tweet data retrieval isn’t very interesting. Suffice it to say that I’m using Tweetinvi for this.

For every extracted hashtag a few things happen:

Here’s the code to get an instance of IDatabase. It is probably best to add it to your DI container.

Afterwards I’m adding the hashtag to a sorted set and I’m telling Redis to increment the rank of this hashtag by 1. Notice that I get the new rank as a response.


First, you’ll need an ISubscriber instance. Like most reusable objects, I’m adding it to my DI container.

Notice that I’m using a RankedHashtag DTO to represent the hashtag and its rank and that I’m serialising it to a JSON string before publishing. Also notice that I’m using a constant for the channel name. That’s because the constants live in a shared project in the same solution and are reused by Visualizer API.

The stream of ranked hashtags is consumed by Visualizer API. It does so by subscribing to the same channel that Visualizer Ingestion uses to publish each hashtag with its current rank.

In a singleton service, I’m registering a handler for new hashtags in that stream

In the handler, each channel message is deserialised to an instance of RankedHashtag *and passed on to any GraphQL subscriber

The way that’s done in Visualizer is quite specific to my needs and to the library that I’m using, called GraphQl-Dotnet.

Please notice that the GraphQL rankedHashtag subscription takes an argument called sampleIntervalSec with a default value of 0. That value is used to determine if a subscriber should receive all the ranked hashtags as soon as they come (commonly referred to as real-time, but not in its strict sense), or if the subscriber should receive another stream of ranked hashtags which is obtained by sampling the “real-time” stream every sampleIntervalSec seconds.

This might be the least interesting part of the system because it only deals with data retrieval and rendering. It uses Apollo Client for React to connect to **Visualizer API **and react-wordcloud to render the data.

At a high level, the frontend retrieves the top 50 hashtags, sorted descendingly by their rank (not shown in this post, but it is a simple sorted set operation). This is in order to have something to display in the wordcloud.

Then it subscribes to the stream of ranked hashtags and whenever a ranked hashtag arrives, it either overwrites one of the existing 50 hashtags or it is added to the same set.

Displaying a nice little word cloud involves a few system components and multiple concepts, but each is easy to understand.

Let me know if you like these posts, with more code than usual. Give the post a ❤️ to let me know and follow me not to miss any future posts on Redis.

Get a Head Start on Your Career with React! A short intro

Once suspended, mariusmuntean will not be able to comment or publish posts until their suspension is removed.

Once unsuspended, mariusmuntean will be able to comment and publish posts again.

Once unpublished, all posts by mariusmuntean will become hidden and only accessible to themselves.

If mariusmuntean is not suspended, they can still re-publish their posts from their dashboard.

Once unpublished, this post will become invisible to the public and only accessible to Marius Muntean.

Thanks for keeping DEV Community 👩‍💻👨‍💻 safe. Here is what you can do to flag mariusmuntean:

Unflagging mariusmuntean will restore default visibility to their posts.