This post is a continuation of the django multi-tenancy series. In this part, we'll begin to implement the backend of the multitenant Django app. We'll be setting up a Django project from scratch.

The project source code up until this point is available on the github setup branch.

The project's final outcome can be explored using this live demo. 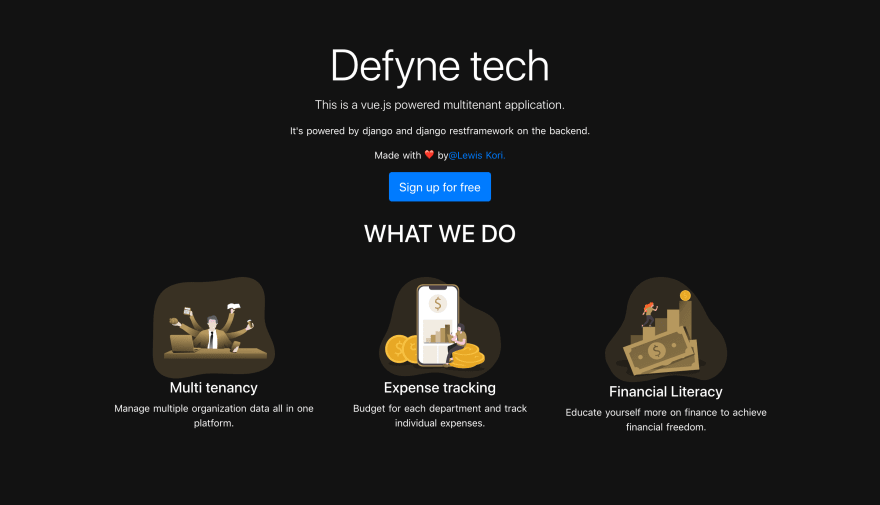 For this project, we'll need to have python 3+ installed. You can find the necessary steps in this digital ocean post. Next, we'll need to make virtual environments for installing project dependencies.

Run this command within the directory the virtual environment was created in.

Once your virtual environment is activated, there's a number of dependencies we'll be needing for the project:

My previous post on setting up Django APIs with JWT authentication should get you started on what JWTs are and how to implement them in Django. 😃

Curious on some of the popular dependencies I use with Django? This post has some handy tools and resources for python programmers.

To kick off the new Django project, run the following once you've activated the previously created virtual environment.

Now to start with the first app that we'll require for the next section:

users will be our first app for this project and we'll put all the authentication logic here.

Next up, we'll cover user authentication in a multi-tenant app powered by django.🤠

Thanks for your time.
If you want more of this, subscribe to my newsletter to get notified whenever I make new posts. Want to chat?
Ping me on twitter.

I recently made a collaborations page on my website. Have an interesting project in mind or want to fill a part-time role? You can now book a session with me directly from my site.

How to Manage Your Secrets with git-crypt