This article is Lesson 5 of Andrew's book, Learn ClojureScript

Until this point, our discussion of ClojureScript has been largely theoretical. We have an idea of why we would want to use ClojureScript, but what does it look like in action? Over the course of this unit, we'll develop a small weather forecasting application from scratch. We will pay attention to the high-level concepts while leaving the discussion of the particulars until later. At this point we are interested in getting used to the look of ClojureScript code, identifying how it makes things that are difficult in JavaScript easier, and how the tooling helps streamline the development process. Although the syntax of the application may still seem a bit foreign, we'll start to get a feel for how fun and productive a ClojureScript project can be.

To start out, we will learn how to create and build a ClojureScript project. Just as the carpenter must be familiar with all of his tools before he can create a masterpiece, we must get acquainted to the tools of our trade. Coming from the glut of tools that we have need for JavaScript development, it should come as a relief that there are only a few key tools that we need for any ClojureScript project.

Each language has its own set of tools to learn, and ClojureScript is no different. In this book, we will focus on two very important tools - Leiningen for general-purpose build tasks, and Figwheel for live reloading of code. We'll begin by looking at our new friend Leiningen, the build tool with the funny name. Much like JavaScript's Grunt, Leiningen is a configuration-based build tool and task runner. The reader who has some familiarity with building software projects should feel at home rather quickly, but do not worry if this is your first exposure to using a build-process. We will walk through the essentials in enough detail to get comfortable building ClojureScript applications.

Leiningen is the defacto build tool for Clojure and ClojureScript. We will use it for bootstrapping a project, managing dependencies, compiling, and testing our projects. Using a single tool for all of these concerns should come as a welcome change from the proliferation of tools in the JavaScript landscape. Before proceeding any farther, we should install Java and Leiningen. See Appendix A for details on installing these tools for your platform. One interesting feature of ClojureScript, is that we do not need to install it manually - we only need to specify it as a dependency of our project. Once we have Leiningen installed, bootstrapping a new project is as simple as running a single command:

Leiningen comes with a large command-line interface that provides access to common tasks such as creating a new project or running tests. Simply running the command, lein, with no arguments will list all of the commands available. For more help on a specific task (such as new in the command we just ran), we can run lein help TASK where TASK is the name of any Leiningen task available. While Leiningen provides a number of tasks by default, we will often run tasks provided by plugins.

NOTE: The terminal examples in this book are for a Unix-like environment such as OSX or Linux. Windows users may have to make minor adaptations the commands.

Similar to JavaScript tools such as Grunt and Gulp, Leiningen provides a platform for creating build-related and utility tasks. However, the focus of Leiningen is broader than that of its JavaScript counterparts. For instance, Leiningen can scaffold:[Scaffolding is the process of generating the files and directories that will be necessary for most projects. Without scaffolding, we would have to manually create the same files by hand for every new project.] a new project, manage dependencies, run build tasks, and deploy a completed application. In the JavaScript world, one might use four separate tools to cover each of these concerns: Yeoman for scaffolding, NPM for managing dependencies, Grunt for running build tasks, and ad-hoc bash scripts for deploying. Compared to the overhead of learning four tools to manage a JavaScript, using a single, well-supported tool for a ClojureScript application is a simpler alternative.

In the examples in this book, we will only be scratching the surface of Leiningen's capabilities. It is quite a capable tool for managing both Clojure and ClojureScript projects, and it has very good documentation and examples on its website. Below is a summary of the only tasks that we will use in this book. As we can see, it will not be too difficult to remember how to use these tasks.

Now that we have had a whirlwind tour of Leiningen, let's dive in and create our first simple project, a weather forecasting app. Since we will be using Figwheel to automatically compile and code in the browser as we make changes, we can make use of a Leiningen template, which is a blueprint for the files and directory structure to create. By default there are several built-in templates for generating Clojure applications and Leiningen projects, but we can specify other templates as well. When invoking lein new with a template name, Leiningen will check to see if the template is a built-in one or one that is available locally. If it cannot find a built-in or local template, it will try to find the appropriate template from a central repository, download it, and generate our project.

The Figwheel project provides a template that generates a ClojureScript project with all the plumbing required for live reloading. We will be using the Reagent library for building the UI, and thankfully the Figwheel template allows us to pass an additional option to include Reagent boilerplate code in the generated project. We can now create the project for our app.

Since this command includes some unfamiliar syntax, let's take a moment to dissect it. As we just learned, the first part of the command, lein new figwheel, creates a new project using the figwheel template. Since figwheel is not a built-in template, and we probably have not created a template by that name locally, Leiningen will fetch the template from Clojure's central repository, Clojars. The remaining portion of the command is passed to the template. By convention, the next argument ("cljs-weather" in our case) is the name of the project and is used to determine the name of the project's directory and top-level namespace. Templates also commonly use the project name in a README or other generated files. There is no convention for the remaining arguments, but templates commonly allow users to supply a number of additional flags. In the documentation for the Figwheel template, the author indicates that for clarity's sake, we should separate template-specific options from the rest of the command by a --. The final argument that we pass in is a flag, --reagent, indicating that we want the template to generate code for the Reagent framework. We'll be using both Figwheel and Reagent extensively through the course of this book. 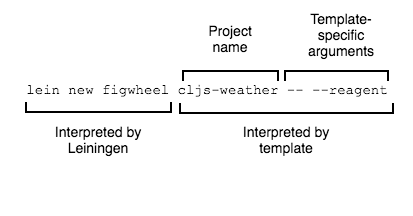 We now have a running (albeit skeletal) ClojureScript project. To see the application that Leiningen generated, we can navigate into the project directory and see what files were generated.

Leiningen generated several top-level files, a src directory, and a resources directory. Leiningen uses the project.clj file for all configuration that it needs, including project metadata (name, version, etc.), dependencies, and ClojureScript compiler options. This file is the equivalent of package.json in a JavaScript project that uses NPM. We will be digging into this file as we build more applications in Section 3. For now, we only need to know how it is used. Finally, the .gitignore file will exclude all of the local files the Leiningen, the ClojureScript compiler, or figwheel might generate. All things considered, this is quite a bit of boilerplace that was handled by a single command.

The src directory contains all of the ClojureScript source files for our project. Usually, there will be a single folder under src that shares the same name as our project, and under this folder, there can be any number of *.cljs files and other folders. If we open core.cljs in a text editor or IDE that supports ClojureScript 1, we will see something like this: 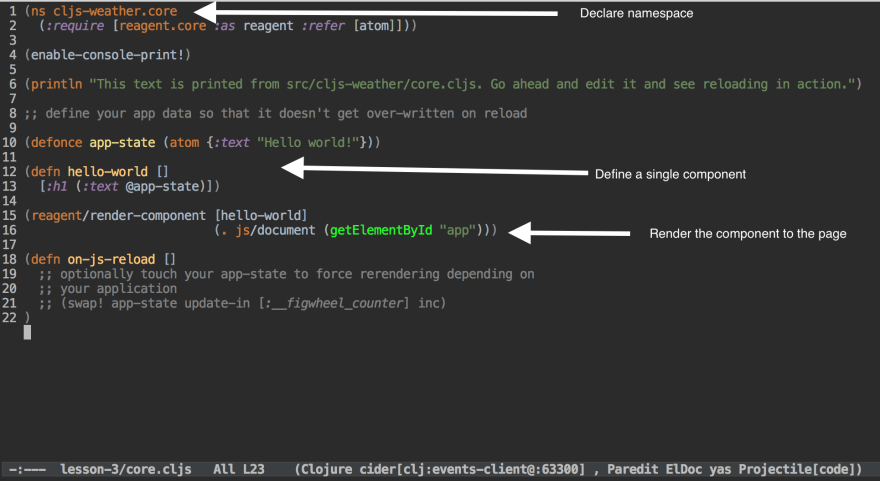 We will dig in to the rest of this file over the next couple of chapters, as we start to build out the weather forecasting app. For now, we will look at the namespace declaration at the top of the file, since it is closely tied to the structure of the project. Each ClojureScript file contains a single namespace, which is simply a collection of data and functions. The namespace is the unit of modularity in ClojureScript. If we open up the core.cljs file that was created, we can see the namespace declared on the first line: (ns cljs-weather.core ...). The ClojureScript compiler uses a simple naming convention for namespaces based on the name of the file that houses them:

One detail that sometimes trips up newcomers to ClojureScript is the fact that we name directories in the project with underscores but we name namespaces with hyphens. This is a convention borrowed from Clojure, which compiles namespaces into Java classes, naming the classes according to their file path. Since hyphens are not allowed in Java class names, they are not allowed in the file paths either. ClojureScript follows Clojure's lead and requires that hyphens in a namespace be converted to underscores in the filesystem path. It is a quirk, but it is one that is easy to live with once we are aware of it.

The resources/ directory contains all of the assets that we need to serve a website, including an index.html, a stylesheet (which is empty by default), and once we build our project, it will additionally contain all of the compiled JavaScript code as well. This template also created an index.html with a single div that we can load our application into and includes the JavaScript file that will load our application as well as all of its dependencies. This is fine for development, but when it comes time to deploy, we probably want to compile all of the modules from our code and everything that it depends on into a single file so that we can compress it more effectively and transfer it in a single request.

We already get a taste on ClojureScript's focus on simplicity: bootstrapping a new project did not create dozens of files full of boilerplate code; it only created 4 project-related files, plus a .gitignore and a README. The amazing thing is that we really do not need more than this to start a new project. ClojureScript development focuses on building incrementally from a

Visit Leiningen's website and explore what you can do with it. Remember that Leiningen is a build tool for both ClojureScript and Clojure (JVM), so some of the instrution is geared towards Clojure. Here are a few exercises to help understand what Leiningen does for you:

In this chapter, we have walked through the process of creating a new ClojureScript project from scratch. We were introduced to Leiningen, the most widely-used ClojureScript build tool, and we explored the project structure that it generated for us. Next, we will learn about Figwheel, the other core tool that will enable us to receive immediate feedback while we are developing. After that, we will be able to jump in with both feet and start writing code. We now know:

Understanding flatMap, mergeMap and toArray operators in RxJS with TypeScript

Getting Started with GatsbyJS