Looking back on your week -- what was something you're proud of?

Examples of 'wins' include:

BTW - I'll be doing all the things associated with 'getting married' starting next week so Michael will be taking over the next three retro posts! You should follow him :) 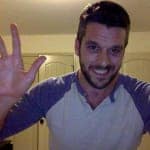 I'm a friendly non-developer from NC who enjoys playing music/making noise, eating veggies, and hanging out with my best friend/wife + our 3 cats.

What are your five most used terminal commands?