This is third article in a multipart series. In Part 1 we talked about the idea for this pool bot, Part 2 covered the hardware behind it.

This article will cover:

Let's put all that sensor data on the Internet!

This bot uses an Arduino Nano to read sensor values, and a Particle Photon to connect to the cloud over WiFi. Now let's get them to talk to each other!

The simplest way to make this work is over a serial connection. You may be familiar with using a serial connection to debug your device over usb, but we can also wire the Transmit (TX) and Receive (RX) pins of each devices to send data between them other serial. 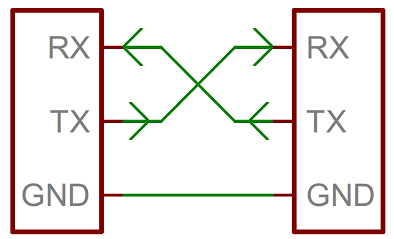 When wiring this we went to cross the TX & RX wires between devices. So Device on the left transmits/sends (TX) to the device on the right to receive/read (RX), and right's TX to the other RX. We'll also want to give them a common ground wire between them.

One thing to note, the Arduino Nano only has one serial connection and it's shared between the USB port and the TX/RX pins. The Photon has three different serial connections, this will become important when we code the Photon.

If you're worried about Particle boards only being 3.3v and Arduino being 5v, don't worry! Particle pins can support up to 5v without damaging the board.

Now let's code the Arduino side:

Now on the Particle side, we will want to use Serial 1 for the Photons TX/RX pins.

One important note: Both sides of the connection need to be running at the same bps speed! You should notice both have a .begin(9600), this sets the bites per second to 9600 on each device.

Now that we have these devices talking to each other, let's look at passing all this sensor data from the Arduino to the Photon.

I decided to store all the different sensor data into a single structure:

Inside loop I just write each sensor's value into a struct instead of defining a bunch of variables. At the end of loop I'll write this out to the serial connection.

We could get cute and build out a JSON object or some other complex shape, but remember we're running on a tiny device that is reading these sensors every second and we only setup a 256 character buffer. So it's simple to just dump a comma separated string.

Some of you may be asking, why not just use sprintf? Well, we want to send floats and the Arduino docs say:

"Due to performance reasons %f is not included in the Arduino's implementation of sprintf(). A better option would be to use dtostrf() - you convert the floating point value to a C-style string"

Yea, sure I could go through all that, or just have 20 print statements that do the same thing ;-)

Let's switch over to the Particle Photon side and talk about the magic in the processBuffer method.

At this point the Photon now knows the latest sensor reading passed over serial from the Arduino!

What about these message that are being written about the water level? Serial.println("ALERT Low water! Turning pump OFF");. Remember that from Part 2?

I'm handling that by peeking at the message string and figuring out if it looks like the sensor data. This little helper function can tell us how many commas are in the message:

Wondering what that magical Particle.publish function does? read on!

Before we get too deep, I'd like to take a second and call out how awesome Particle hardware really is! You can pick up a Photon that has wifi built in for $20. These devices can be controlled and flashed over wifi, so you can update code on them without hooking up a usb cable!

Particle also includes access to their online tools like the Web Based IDE and Device Console. Some of Particle benefits (Included for FREE):

So what does all that mean? Out of the box your Particle devices know how to talk to these services. If you log in to the Particle Console you'll see all your devices. 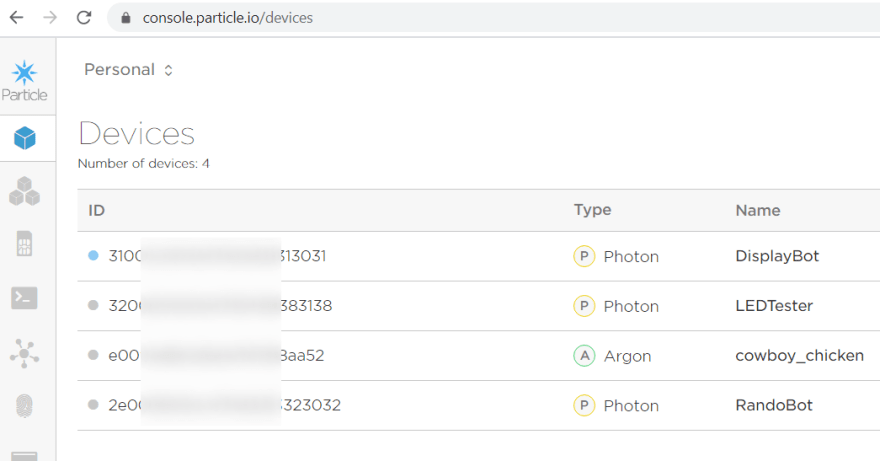 Clicking on a device will show you detailed information. A cool feature is the signal button (top right), it will turn the onboard LED into "particle nyan" aka a rainbow of colors. This is helpful if you have a few different devices powered on and you need to figure out which is which. 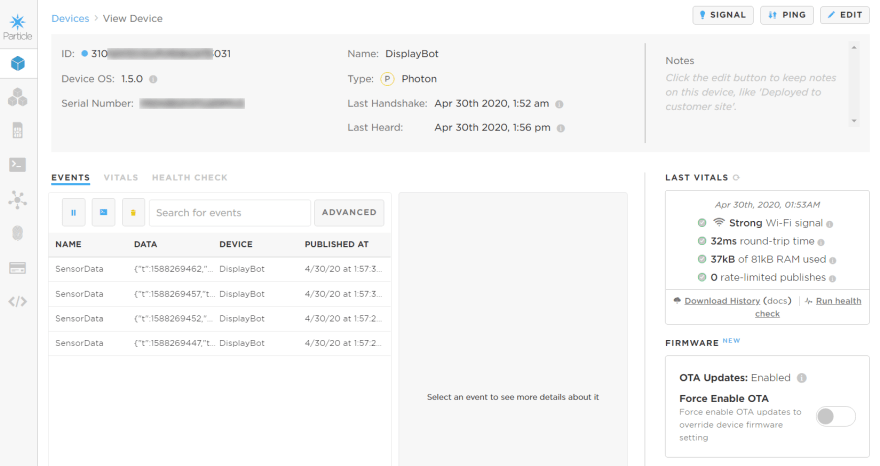 Now let's get back to pool related things!

Part of the Particle Device OS contains a handful of Cloud Functions baked in.

Let's look at Particle.publish(). This will publish an event to their cloud.

In the processBuffer function we'll transform our SensorData struct into minified JSON and publish it. We will throttle this to one call per 5 seconds. We could add logic to check if important values changes instead, but time based is simple enough.

At this point my pool is a Thing on the Internet! In the next part of this series we'll cover building backend services to store these events, for now let's keep talking about Particle Cloud awesomeness.

If you peeked at the Particle Cloud Documentation you may have seen Particle.variable() and Particle.function() these allow us to do things in the cloud that affect our device.

I want to control my pool pump remotely and be able to manually override it so it's on or off regardless of water level readings. I also want to be able to clear the override. Since the Arduino is the brain controlling the relay to the pump, I just pass the command through serial.

On Arduino side, we just read the serial data.

You may notice command is a string on Particle side, but for my needs I only built one character commands, this made the logic a bit simpler.

When I enter a value in there and click call, Particle cloud sends it to my Particle Photon device, which calls the local sendCommand function. That function writes the command to serial and the Arduino reads the serial and fires the matching logic.

Later in this series you'll see how we can call this cloud function from our web app.

Up Next: Saving Particle Events to Azure Table Storage